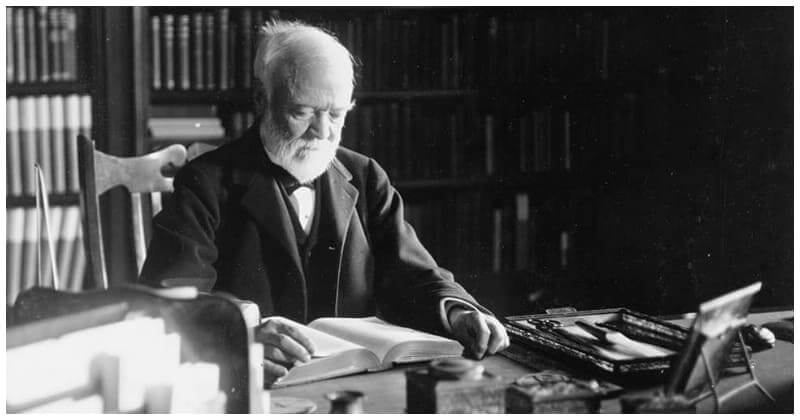 When he was dying on his hospital bed, the US “steel king” Andrew Carnegie – the once richest man in the world was angry with himself because he still had $30 million in his account not yet donated. From an impoverished Scottish immigrant, Andrew Carnegie rose to the top and became the world’s richest man from the US industry. In total, during the last 18 years of his life, Carnegie gave away 90% of his fortune, equivalent to $350 million, to charity.

Andrew Carnegie was born on November 25, 1835 in Dunfermline (Scotland) into a family of weavers. After moving to America in 1848, he worked for a long time as a labourer, then invested in the railroad industry.

In 1889, Carnegie Steel Corporation became the largest steel company in the world. In 1901, Carnegie sold the company for $480 million, equivalent to 2.1% of US GDP at that time. If calculated according to purchasing power with the average inflation rate of the US dollars, the figure would be approximately $15.7 billion.

The telegram from J.P. Morgan had only one line: “Congratulations, Mr. Carnegie, you are the richest man in the world.” Andrew Carnegie sold his steel empire, netting him a personal payment of $250 million (or about $8.2 billion today). He spent the next two decades becoming the world’s greatest philanthropist. Starting from scratch, Carnegie always told himself not to let money decide his downfall. In December 1868, at the age of 33 with an annual income of $50,000, he wrote a note to himself: “Man must have an idol — The amassing of wealth is one of the worst species of idolatry. No idol more debasing than the worship of money.”

At the end of the letter, Carnegie encouraged himself to participate in community issues, especially improving education and living conditions of the poor.

In his article The Gospel of Wealth in 1889, Carnegie made it clear that the rich should use their wealth to help society. He wrote: “The man who leaves a million-dollar fortune after death will not be mourned, honored or praised. The man who dies thus rich dies disgraced.”

In order for the rich not to have to worry about “a shameful death,” Carnegie suggests they give to charity right from the get-go by investing in an area that “never gets well taken care of,” and that is education.

During his lifetime, Carnegie was particularly interested in education. When he was poor, he often went to Colonel James Anderson’s public library to read books for free. It was these books that gave Carnegie the knowledge to later succeed. Later, he helped open 3,000 public libraries in many countries. In addition to the library, Carnegie also founded the Carnegie Institute of Technology in Pittsburgh, now Carnegie-Mellon University, and many academic support funds.

In a BBC documentary about Carnegie, former UK prime minister Gordon Brown said Carnegie has inspired the rich to “have a clearer mission, focus on making a difference, not just investing in individual hobbies”. In the context that the donation levels of the rich in Britain and the United States have both decreased, Mr. Brown said that millionaires and billionaires should look at Carnegie’s example to reflect upon. As the “steel king” said: “Making the world a better place than you have seen is a noble motivation.”

On August 11, 1919, Andrew Carnegie took his last breath. According to his wishes, the entire amount of $30 million was donated to foundations and charities. Carnegie has a daughter whom he left just a small sum of money, enough to live comfortably in the same house. Later, when the house maintenance fee became too expensive, she sold the house.

You Wanna See An Angry Cancer? Try These!

Everything You Need To Know About A Pisces, Exploring In 10+ Memes