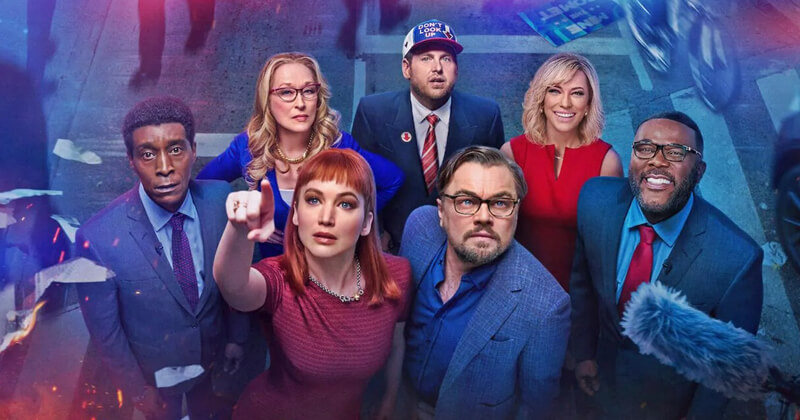 Right on Christmas, Netflix gave its subscribers one of the most expensive movies they’ve ever made. Since the announcement, Don’t Look Up has been a particularly anticipated title, especially given the star-studded cast that brought the project huge attention from the public.

The most standout among the performers must be Leonardo DiCaprio, who has just returned to acting after two years from Once Upon a Time… In Hollywood in his first collaboration with Netflix and with a streaming service in general. It should be added that the film was written and directed by the genius Adam McKay who made some of the funniest comedies of the 2000s such as Anchorman: The Legend of Ron Burgundy, Step Brothers, or Talladega Nights: The Ballad of Ricky Bobby. After these incredible successes, McKay tried his hand at a more committed cinema with movies like The Big Short (which gave him an Oscar for Best Adapted Screenplay in 2016) and Vice. He was also the executive producer of the most awarded and acclaimed dramedy series of recent years: Succession, whose pilot was directed by McKay himself.

With Don’t Look Up, Adam McKay manages to create a comedy capable of dealing with dramatic and current themes. The world that McKay outlined is made up of individuals who are disinterested because they are all engaged in activities of little depth. Those who actually care about what should be the most important aspects of life on the planet are, sadly, few and far from the community. In other words, the film is a great metaphor for contemporary life, a real social criticism staged in a direct and not very veiled way. Having such a large and varied cast certainly helped promote the movie. Leonardo DiCaprio proves to be the best in the field with a central role that still manages to amaze although IT’S very different from the other characters he played. There are also outstanding performances of Jennifer Lawrence, Meryl Streep, Rob Morgan, Johan Hill and Mark Rylance as well as some nice little parts of Timothée Chalamet, Cate Blanchett, Tyler Perry and Ron Perlman. Notably, Don’t Look Up also features music stars Kid Cudi and Ariana Grande in her first film role.

Don’t Look Up is able to make people laugh through exaggerations and over-the-top behaviors, and at the same time, it makes people think deeply. It is a film aimed at everyone, from unconcerned young people to those adults who are being blinded by greed and power. The characters of Ariana Grande and Meryl Streep are exact examples of this. On a technical level, this brand new work of Netlfix is pretty well done as well. McKay’s direction is more static than usual, but it is still highly recognizable. The real spearhead, however, is the editing that was entrusted to Hank Corwin. In the first part, the scenes are linked together in a more quiet way. But when the narration begins to take a different turn, the editing manifests become way more eccentric, giving a feeling of frenzy to the whole film. Despite the length, Don’t Look Up is absolutely enjoyable thanks also to a very funny script and a dynamic staging.

In conclusion, Adam McKay has made one of the films of the year, that’s a fact. Released on the platform on Christmas day, Don’t Look Up is a bet by Netflix itself in the hope that it can reach as many people as possible. Frantic and hilarious in its staging, it will certainly be a divisive movie that will be highly appreciated or strongly hated.