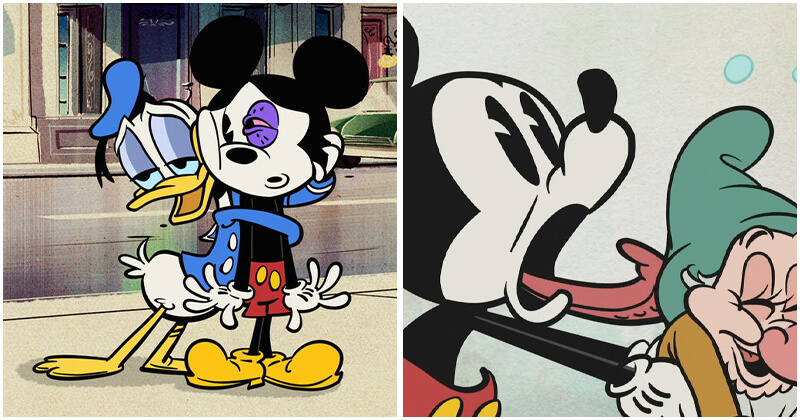 In this post, we would like to introduce to you 5 pretty Weird Mickey Mouse cartoons that truly go against the grain.

Mickey is often known as an open, charismatic and fun-loving mouse, and that’s the reason why most cartoons centered on this whimsical character often bring joy and peals of laughter to the viewers. However, it’s not exactly the case we are talking about today.

In this post, we would like to introduce to you 5 pretty bizarre Mickey cartoons that truly go against the grain, all coming from the Mickey Mouse series produced by animator and writer Paul Rudish. Each one lasts for about only 4 to 7 minutes, but they will surely amaze you – in a quite odd way to be honest.

Prepare yourself before scrolling down, because you won’t be able to unsee them later:

Since Goofy had always dreamed of a potato-themed amusement, Mickey and Donald decided to build it themselves, leading to tons of troubles afterward.

A monkey stole Mickey’s clothes and joined his friends on a trip down the river, leaving him in his birthday suit behind. None of Mickey’s buddies suspected anything, and the monkey even came up with some very weird acts afterward.

This is a short crossover between two of Disney’s most successful franchises: Mickey Mouse and Snow White. And no, it’s actually not enchanting and magical as you think.

Professor Von Drake decided to help Donald manage his temper by splitting him in half. As a result, Mickey was forced to face two very different versions of his best friend: a super sweet, cuddly duck and an incredibly muscular, hot-tempered one.

To celebrate Mickey’s birthday, Minnie started to compose a tune for him. It sounded lovely at first, but then the situation got worse and worse, and you won’t believe what she did with the poor boy at the end of the video.