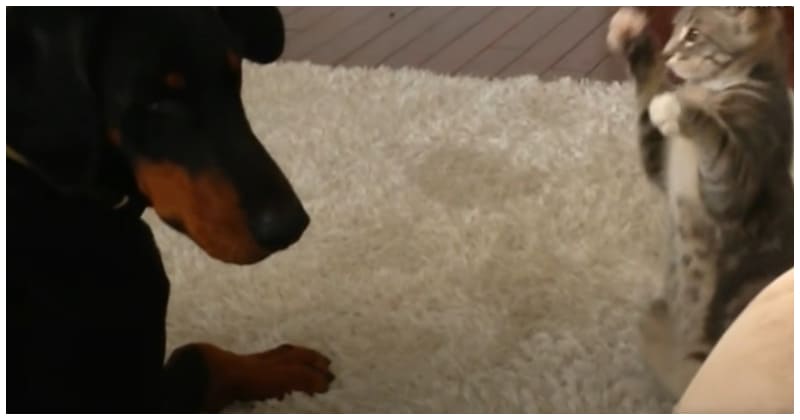 Over the years, we’ve been chilling out with thousands of videos about cats and dogs. But we all love to see more of them because there is never enough to tell the cuteness these creatures bring to us.

The Internet has recently been attracted to a viral video in which a Ninja kitty constantly busts out her best moves to show a Doberman she is the boss. The clip has gained 3,5M views on Youtube and received a number of positive comments.

According to the video owner Jessica Manning, the cat is Sophie, two months old. She was found abandoned in a gas station in British Columbia, Canada.

Jessica adopted her and decided to introduce the kitty to her three-year-old Doberman named Bishop. As you might guess, the video captured the moment the two got acquainted.

Sophia was caught on camera trying to determine with the Doberman who’s is who. The kitty constantly showed off her Kung-fu, booping the dog gently, without claws, on his nose. Meanwhile, Bishop patiently lay down and didn’t put up a fight. He proved that he was a true gentleman.

Jessica was proud of her dog and said: “Sophie has a lot of attitudes – but she’s a cuddle monster. Bishop’s behavior has been excellent – I couldn’t have imagined he would be so patient. He just wanted to make friends with her but she’s still getting to grips with him.” She hopes that the two will soon form a strong bond and become best friends of each other. She loves to watch them playing with each other and the way Bishop shows his tolerance and patience towards the little sis.

Cat Burglar Gets Ultrasound, And The Internet Laughs At The Result

17 Funny Pets Who Are Captured In Super Awkward Moments

Cat Versus Dog Series: Dog Man Feels Offended Because His Furbaby Is Rejected Out Of A Friend’s Party