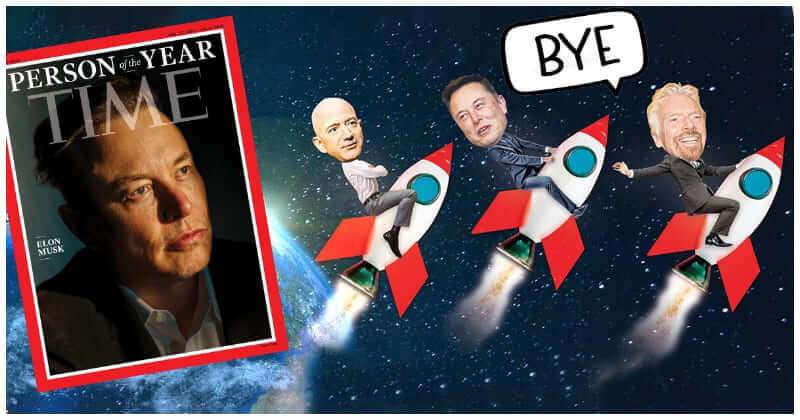 The fact that Time magazine honored technology billionaire Elon Musk as “Person of the Year” was criticized by politicians and the media. It’s time to stop seeing tech billionaires as heroes.

On Business Insider, author Noam Cohen said that if we continue to worship Elon Musk and other tech billionaires as heroes, we’ll risk having to set particularly beneficial regulations for these entrepreneurs. In recent times, the Tesla CEO is the most talked about technology billionaire, which is somewhat sensible.

He is the richest person in the world, participating in television programs, got selected by 2 prestigious magazines Time and Financial Times as “Person of the Year”, and appeared in the list of people who created breakthrough milestones (Disruptor Hall of Fame) by Newsweek.

It is clear that Elon Musk is a man of public attention. He has an understanding of the universe, promising of a self-driving car world and intergalactic space travel.

However, in Cohen’s view, if we let that overwhelm everything, we will ignore the dark side behind the glamor of Elon Musk’s career.

These are allegations of disregard for worker safety, violation of government regulations in many areas (finance, transportation, workplace), plans to mess up the atmosphere with satellite.

Senator Elizabeth Warren of Massachusetts did not hesitate to criticize Elon Musk. On her personal Twitter page, she quoted Tesla CEO as being honored by Time magazine as “Person of the Year”, along with a harsh comment, demanding that he “actually pay taxes and stop freeloading off everyone else.” Not only tax ambiguity, the richest person on the planet is also entangled in other scandals. According to the Washington Post, 6 female employees have reported tolerating sexual harassment at a Tesla factory.

In the lawsuit, they say they were “subject to indecent comments and calls, intimate touching and discrimination”. Similar accusations have also been made at rocket maker SpaceX, another famous corporation founded and run by Elon Musk.

Additionally, in its introduction to “Person of the Year,” Time notes Musk’s buzz on social media, but argues that he’s a sizable figure who’s covered many advanced technologies so that should not be a problem.

According to Noam Cohen, if we continue to worship technology billionaires as heroes, we would risk “bending” important policies in favor of entrepreneurs.

The author argues that billionaires, like Elon Musk, often make decisions from their own perspective with little regard for the impact on the public. Musk sees electric cars as a business opportunity and has seized it well by boosting sales. Before that, he saw online banking as an opportunity and jumped in. The same is happening in space travel. However, the US government views electric cars as a public product, a way to help reduce dependence on fossil fuels.

Most importantly, it should not be taken that the success and confidence of “tycoons” like Elon Musk will help humanity solve pressing problems. We still have to wait for the results of the projects done by Bill Gates or Jeff Bezos – billionaires who once held the title of the richest person on the planet – before assessing their real contribution.

According to a veteran Time magazine author, Elon Musk pursues self-defined “humanism”. He does what is “best for humanity” with his own viewpoint and vision.

In other words, it is a type of humanism that takes advantage of social, human and institutional policies to actualize individual visions without contributing back.

Some people think that Elon Musk aspires to change the world and make the Earth a better place, however, Noam Cohen assesses the richest person on the planet is actually looking to avoid responsibility for the community.

Ancient City Of Uruk Had Advanced Technologies, Believed To Be The Cradle Of Human Civilization