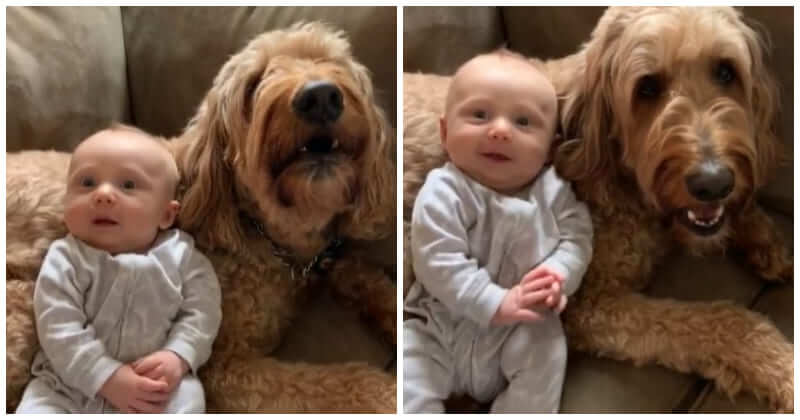 Pets and babies often create good connections. Some pets are even found helping owners to protect and take care of their babies. Cats and dogs understand that when their owners are about to give birth to a child, they are going to become good brothers and sisters.

Ralph E. Doodles the dog proves himself to be a big brother of his baby human. A video posted on Rumble captured a warm moment the dog eagerly told his little brother how much he loved him. The adorable footage lasts no longer than 1 minute, but it has won the heart of more than 340K people. In the video, Doodles was lying on the couch with the baby boy leaning on him. The mother who filmed the clip constantly suggested some loving sentences as her dog was learning how to show love in human language. “I love you”, the woman repeated.

Doodles tried to mimic the sounds he heard, and it was just so cute to watch the moment. Enjoy it here:

As a saying ever says: “Animals are the purest souls of the world”, we are sure that Doodles is a brilliant example of that.

10+ Dangerous Dogs Behind Those “Beware Of Dog” Signs (New Pics)