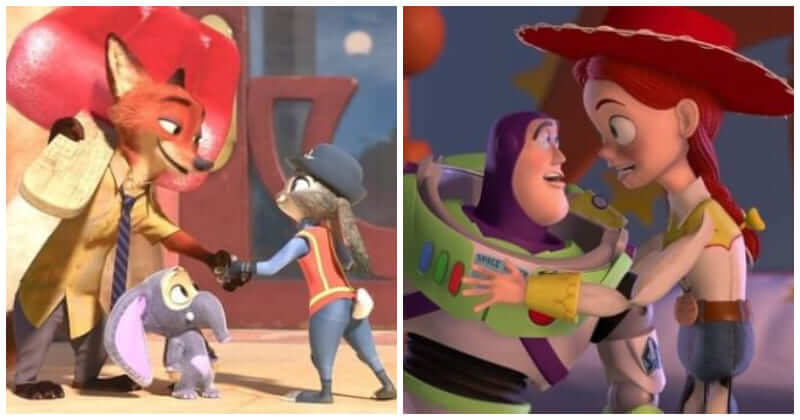 Do you know what else fantastic Disney movies have to give us besides excellent teachings and thrilling adventures? Those are romantic love stories! Some of the most romantic couples in animation have been produced by Disney. Aladdin and Jasmine, Cinderella and Prince Charming, and even newer entries like Anna and Kristoff have melted the hearts of countless fans. However, despite the studio’s long record of memorable couples, there are still others that go unnoticed.

There used to be other extremely romantic couples in Disney movies that now, almost no one notices them anymore. Maybe they’re overshadowed by other Disney classic couples because their love story isn’t compelling enough, or more simply, they just aren’t getting the attention they deserve. Nevertheless, their relationships are truly magical, and Disney should take notice.

The following is a list of ten Disney couples who deserve greater recognition. Keep reading till the end to find out about romances you may have accidentally ignored! Despite the film’s fame and fan base, the couple has only made a few guest appearances. Nick and Judy are a power couple that Disney should capitalize on, especially now that a spinoff series is in the works. Fans are clamoring for answers, given how the film ended up setting up a possible relationship. This is one relationship that has a lot of potentials.

#2 Mr. Incredible and Elastigirl (The Incredibles) Despite the fact that the Parr family has already been the subject of two films, Mr. Incredible and Elastigirl are two characters who deserve their own spin-off without the kids. The Parrs aren’t just superheroes; they’re a married couple of superheroes with marital issues and dynamics. That’s a part of Pixar that has to be explored. In this realm, the idea of a courtship between two superheroes is brimming with potential. Milo and Kida of Atlantis are not just one of the most adorable couples in film, but also one of the most realistic. The fact that each partner has something that fuels the other is what makes the relationship so wonderful. Milo is a well-educated linguist who aspires to learn everything there is to know about the world, its cultures, and its people. Kida is a voracious reader who shares Milo’s fascination with her people’s past. It’s very fitting that they close their movie together, hand-in-hand. Given how The Lion King revolutionized animation, it’s odd that this pair of lions has been left in the dust. Despite the fact that they don’t accomplish anything innovative in terms of relationship dynamics (best friends become lovers is a familiar cliche), they’re nevertheless a pleasant couple with their own memorable love song and sequence. There’s no reason they shouldn’t mingle with the regulars.

#5 Max and Roxanne (A Goofy Movie) In fact, if a lovesick Max hadn’t been trying to impress his lovely, redheaded beloved, the main premise of the entire film would not have happened. When you’re in love, you do crazy things, but persuading his father to go to a Powerline concert is rather unusual. Most fans would do anything to see these two have a happily ever after since they are so adorable, awkward, and realistic together. Pixar may be the inventive “other studio,” but they squandered a lot of potential by focusing on Woody and Bo’s friendship instead of giving Buzz and Jessie equal time. Their relationship, if anything, would provide more comedy opportunities. Not only are they underappreciated, but they’re all overlooked. They’re one of the most hilarious duos to emerge from Andy’s room because of their mismatched topics and adorable awkwardness.

#7 Bernard and Miss Bianca (The Rescuers Down Under) These two members of the Rescue Aid Society appear to have fallen by the wayside when it comes to renowned Disney couples, despite having an entire sequel with their engagement as a subplot. Bernard and Miss Bianca are a pair of daring mice with a long list of accomplishments. Not only are they members of the Rescue Aid, but their missions have taken them from the bayous to the outback, earning them certified globetrotter status. Marian does not appear in the third act of the movie, despite the fact that the “Love” song scene in the original ’70s classic is one of the most beautiful moments from the studio. Nonetheless, the two embody the romantic element that can be seen in many medieval tales. Although the heroic hero beating the evil and earning the hand of his lady fair is a bit of a cliché, few foxes better depict it than this duo. Sure, Mickey and Minnie get all the attention for their numerous romantic adventures, but many people overlook the fact that they aren’t Toontown’s only power couple. While he’s had a few other love affairs throughout his career, Clarabelle Cow appears to be Goofy’s major squeeze. Both are abnormally tall and gangly, but Clarabelle’s down-to-earth personality contrasts with Goofy’s antics, making for a perfect pairing.