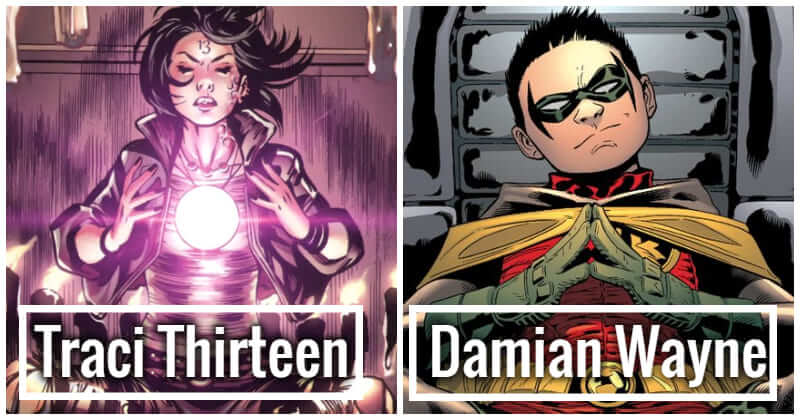 It has been years since the first DC hero appeared and since the DC universe started in the 1940s. Now it is time for the next generation of amazing superheroes to be revealed!

Since the parents are all superheroes with formidable power and strength, it is no doubt that their descendants will inherit their brilliant abilities and take over the mission of protecting the universe.

Some characters of the new generation have made an appearance in the DC comics and created a sensation in the fans community. They do not disappoint the fans at all! We can say that these kids have all passed the “vibe check”!

Check out the descendants below – their age might be small, but their powers are not! Traci Thirteen inherits the amazing talent for magic from her father – the infamous supernatural detective and psychologist Doctor Thirteen. Her innate power at magical spells gives her a bright future as an important role in the next generation of superhero kids. Also known as Bart Allen or “Kid Flash”, Impulse is a member of the Allen family that has a great connection to the Speed Force. With his amazing power of speed, he is now the Fastest Kid in the whole DC universe. Inheriting the godlike abilities to manipulate energy powers, Naomi was actually sent to another world by her parents since they were afraid that her power might cause more harm than good. It seems that her strength is just the tip of the iceberg and there is more to be revealed in the promising future of this superwomen. Damian Wayne can stand with his head held high alongside his friends in the next generation of DC superheroes thanks to his formidable ability in assassination and combat. Having trained since childhood, he still has a lot more to learn to take over his father Bruce Wayne as the new Batman. The son of Clark Kent and Lois Lene, Jonathan Kent is the rightful successor of the Superman mantle. Even though he has not hit puberty, this Superboy is already a mighty force that every villain should look out for in the future. Shazam has the powers from six ancient Gods, each of whom gave him one piece of his full abilities. Considered as one of the world’s mightiest mortal, Shazam could even cause a great threat to other DC immortals such as Superman and Darkseid.