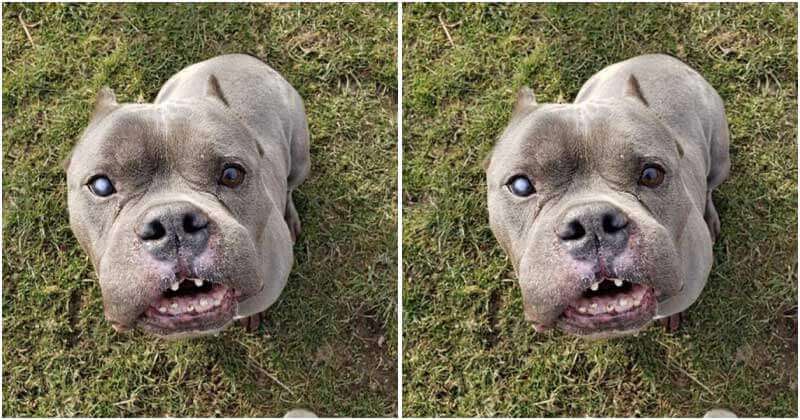 All dogs in the world who live in shelters wish to have a family. But there is a cruel fact that humans adopt pets usually based on their appearances, so the wish of having a forever home seems to take longer for some older dogs who do not have a “cute” look.

But no matter what every dog deserves love and a forever home, just like this pooch that waited for years to find his family and finally got his wish.

This is Wally the sweet Pitbull who doesn’t look like your ordinary pooch but he had a rough life and now all that he wanted was some love and care.

When Wally was brought to the Town of Islip Animal Shelter on Long Island, New York, he was a stray and almost 10 years old.

He was experiencing some health issues including, blindness in one eye and skin infection reports The Dodo. All this gave the poor dog an appearance that worried the shelter staff, they were afraid he never would get adopted.

The pooch proved to have an amazing personality and became the favorite dog amongst the staff.

“He loves to slobber on you and will do anything for some food,” veterinary tech Danielle Gorle told The Dodo. “He also likes to just hang out and not do anything.”

“Wally is an amazing walrus/hippo/rhino dog that really just needs a home that accepts him and to spend his golden years in!” Jen, a volunteer at the shelter, wrote on Facebook.

“He is a little mush and a volunteer favorite.”

Many visitors sadly couldn’t see past the dog’s appearance and he had to wait a year to find his home since he also needed to be a one because he doesn’t work well with other animals.

The shelter staff reports that not getting adopted started to affect his well-being.

“He seems to be declining,” said Gorle. “He was happier when he first came in. He likes when he gets to go out but he seems depressed in his kennel.”

But thankfully Wally’s story has a happy ending.

A month after he went viral and we first reported on the dog, the shelter announced that Wally had found his forever home, finally.

“He is relaxing comfortably and looks great!” the shelter wrote.

We are so happy for the sweet furry, every dog deserves love and care.

Man With Poor Vision Shares How He Invites A Raccoon Onto His Hammock Believing It’s His Cat, And People Laugh A Lot