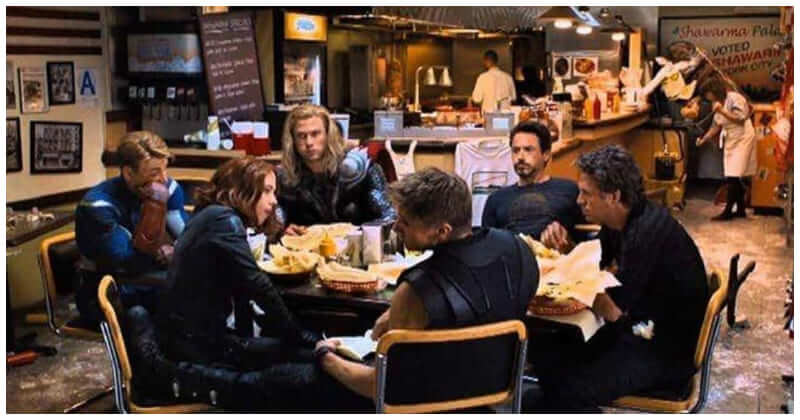 Since the first series about the first superhero – Ironman released in 2008, Marvel Cinematic Universe has captured many people’s hearts with a good-looking cast and attractive plots. Following the success of Ironman, MCU continued releasing many big hits such as Thor and Captain America and most of them received positive feedback from the audience. We had hoped that one day Marvel Studios would have brought all superheroes on one screen. That had come true.

The first film of “The Avengers” in that series appeared in 2012 had absolutely become a blockbuster with a star-studded cast. Until now this film still gets much attention, many people keep watching and find out surprising details from it. Here we have collected some. Let’s scroll down and see whether you realized before.

#1 In a second of the display in Iron Man’s helmet, we can take a lot of valuable information There are many times the display of Iron-man helmet shown, but the audience didn’t always put a lot of attention on that because we often focus on his conversation and feelings. If you watch this moment again, you might realize that he’s overpowered.

#2 Do you find something interesting here? Look at the score! “0The man playing Galaga” is about to beat the high score. This might be one of the best lines of Iron-man in the Avengers.

#4 In some behind-the-scene moments captured, Evans had to cover his “Snowpierce” beard

To be suitable for the movies, actors sometimes have to change their appearance. In “The Avengers (2012)”, Captain America had no beard, but in other films, where he played, his character was required to have a beard. That’s why he needed to cover his beard in this picture.

#5 Banner subtly implies what he will never get Getting huge when being mad with a superpower is considered a special thing that everyone wants to possess. But this character has his own sadness, being a hero also means that he has to sacrifice his own private life – he couldn’t have kids. In this scene, he touched an empty baby cradle and said “I don’t always get what I want”.

#6 A deleted scene reveals the date when Tony’s parents died. It exactly marches up to their date of death in Captain America Civil War (2016) It is said that no one can measure up to the Russo Brothers when it comes to continuity. This is a very small detail, but it shows the carefulness of the filmmakers. In the film, Steve Rogers looks really cool and young, but following his story, you probably know he had lived for nearly one century because of 70 years living in the ice. Therefore, he often gets special treatment. Nick Fury used a regular paper file when recruiting Captain America.

Maybe it’s too long a time sleeping, it could be hard for him to access with the high technology like a holographic display. Tony had heard about Coulson’s love with a cellist from the conversation between him and Pepper. In this movie, he attempts to let Coulson see that cellist agins and informs Cap about it. If you remember Hawkeye, you might be more familiar to see him with an arrow. In this scene, he is firing at Maria hill, even he is using a gun, his pose is like using a bow and arrow.

#11 Hawkeye always tries to show his respect to Nick Fury In “Avengers” (2012), Hawkeye is the one who is being mind-controlled by Loki, the way he calls Nick Fury “Director” shows that he’s there and the respect for his director is never gone.

#12 Pepper didn’t wear shoes to reduce the difference in height with his partner.

If you notice, you could know that Pepper is some inches taller than Tony. Therefore, she has to get off her shoes while Tony is wearing shoes to reduce the height difference. One of the saddest dialogues of the entire MCU appears in The Avengers. Bruce Banner actually referenced a scene in The Incredible Hulk game (2008) It is considered a living source of this superhero. If you notice, you will realize, it will dim whenever Tony falls and relights when he’s awake.