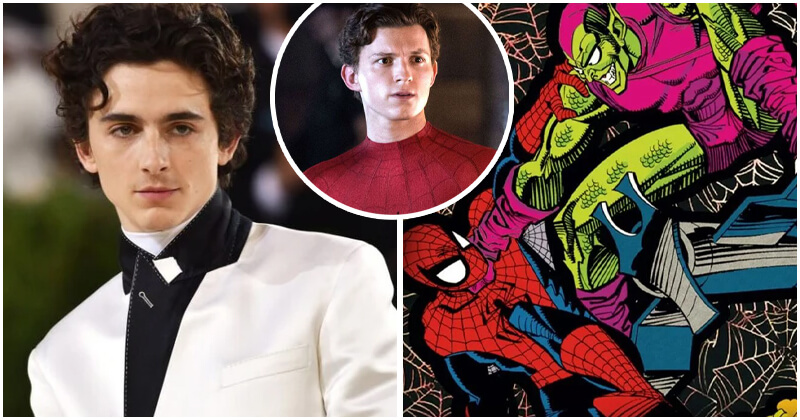 Spider-Man: No Way Home is now around the corner, yet we are already thinking about the future of the wall climber which will again be the protagonist of (at least) a new trilogy. So, who will appear in this new film series?

During the promotion of No Way Home, Tom Holland and the other stars of the movie specifically discussed the possibility of bringing up a very important comic book character, Harry Osborn. Accordingly, a big name was already mentioned: Dune star Timothée Chalamet., who is currently filming Wonka.

In the Spider-Man comics, Harry Osborn is the son of Norman Osborn and the best friend of Peter Parker (although their relationship has encountered some issues due to various confrontations, as we all know). The character has already appeared twice on the big screen. In his first appearance, Harry Osborn was previously played by James Franco in Sam Raimi’s Spider-Man film series which consists of three movies: Spider-Man (2002), Spider-Man 2 (2004), and Spider-Man 3 (2007). In The Amazing Spider-Man 2 (2014), it was Dane DeHaan who impersonated Harry – later became Green Goblin at the end of the film.

Although the character was a major figure in Peter Parker’s life in both comics and movies, Harry Osborn was never mentioned and never appeared in the Marvel Cinematic Universe. It’s actually a logical and understandable choice because Tom Holland’s Peter Parker has never had anything to do with Norman Osborn, even when the actor already heralded an epic confrontation with Willem Dafoe’s Green Goblin in the new movie.

Despite all that, the cast of No Way Home seems to be very interested in seeing a new variant of Harry on the big screen. In a recent interview with Associated Press, Tom Holland, Zendaya and Jacob Batalon were asked about what role Timothée Chalamet could play if he became a part of a Marvel project. Surprisingly, all three actors agreed on a role that they called “perfect”: Harry Osborn.

“I don’t know, people want him to be (Harry) Osborn,” said Zendaya, co-star of Chalamet in Dune. “He’d be a good Harry Osborn… I think it would be good to bring him in as a FOS (friend of Spider-Man) and then he kind of becomes bad. And then he could be a villain. He’d be a good villain,” Holland then continued.

You can watch the interview here:

Spider-Man: No Way Home will not be Tom Holland’s last film appearance as the iconic superhero. A few days ago, Sony’s producer Amy Pascal has confirmed the development of a new Spider-Man trilogy in the MCU, once again in collaboration with Marvel Studios. It’s truly the news that fans expected, especially after Venom: Let There Be Carnage‘s post-credits scene, which hinted at a stronger bond between the MCU and the universe created by Sony.

Directed by Jon Watts, Spider-Man: No Way Home will be released in theaters on December 15, 2021. Spider-Man: Across The Spider-Verse: The Sequel About The Black Spider-Man