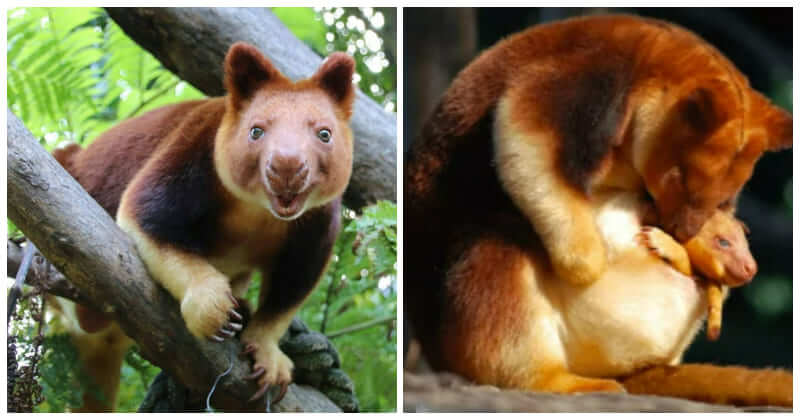 Have you ever heard of the tree-kangaroo? This animal species is often found in rain forests in Papua New Guinea, Indonesia, and Australia. But why “tree-kangaroo”? Because they live on the trees, unlike other kangaroos who live in open grasslands or in deserts. They look quite similar to common marsupials, except for their limb size. World Wildlife Foundation (WWF) stated that these animals have shorter legs and stronger forelimbs to help them climb easier on the trees. According to WWF, there are 13 species of tree-kangaroos, many of which are extremely rare. The tree-kangaroo is among the world’s endangered species that needs urgent action from governments, nations, and international organizations. One species, the Wondiwoi tree kangaroo, is on the edge of extinction with only 50 individuals found on Earth.

There are a variety of reasons for their gradual absence from the wild. Hunters and poachers are the main threats to these creatures. Besides, deforestation caused by humans is contributing to the population loss of tree-kangaroos. WWF has tried to protect these animals by “reducing deforestation and loss of habitat caused by illegal logging, . . . raising awareness of habitat loss and the effects of hunting, promoting and managing protected areas, [and] reducing illegal hunting through programs.”

Tree-kangaroos are really the creatures of the land. They feed mainly on fresh leaves, fruits, and other items like grains, flowers, or eggs. Looking at these cute primates, can you believe that they spend most of their life living alone? But yes, it’s the fact. According to National Geographic, tree-kangaroos don’t live as families. The only strong bond they have is that of mothers and their babies. A female tree-kangaroo carries and cares for her babies on her own. And even the alone time during pregnancy seems not to affect her. But don’t misunderstand what we mean. The fact that they are solitary animals doesn’t mean they don’t know to love and show their love.

For example, a mother tree-kangaroo carries her babies in her pouches for 13 months until they are ready to live outside. The mother keeps following her babies for another 6 months. And when they are 18 months, they are fully grown to leave mom’s comfort and start a new life circle. There are much more things we want to write about these cute, cuddly animals. But we are sure with the above information, tree-kangaroos can earn your love! Couple Of Best Friends Chihuahua And Pig Rescued Together In Arizona

23 Funny Photos Of Dogs That Totally Look Like Celebrities