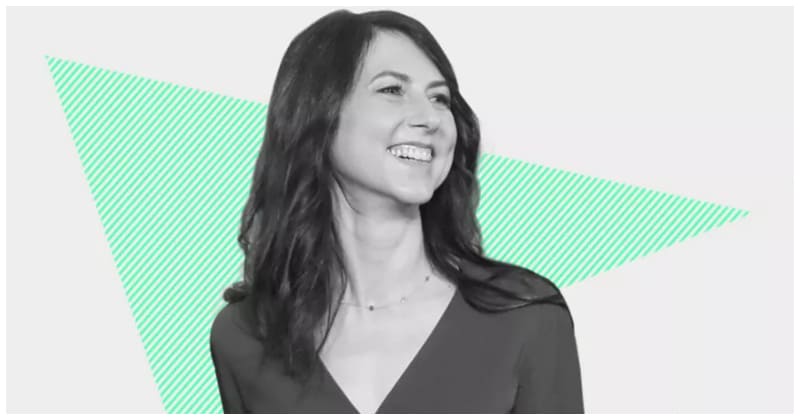 Three years ago, MacKenzie Scott was a writer, wife and mother of four. She started an anti-bullying organization and helped her husband found Amazon in the 1990s. However, Scott is quite private in the media, often known as the wife of Jeff Bezos – owner of Amazon and one of world’s richest. After the divorce, Scott received a quarter of Bezos’ shares and became one of the richest female billionaires in the world. And almost immediately, she began planning to give away her fortune.

In May 2019, when signing the Giving Pledge – pledging to give away at least half of her fortune, Scott once wrote: “I have a disproportionate amount of money to share”. She also said “will keep at it until the safe is empty”.

Not only is Scott keeping her promise, but she is giving away at record speed and in full control of the amount she contributes. Over the past two years, the $57 billion owner has donated $8.6 billion to 780 organizations, promoting issues including gender equality, racial equity, and public health. She does it without an office, an email, and a full-time support staff.

Instead, Scott conducts philanthropic activities with her new husband Dan, researchers and consultants at the nonprofit consulting firm Bridgespan. She receives no order, has no board of directors, and doesn’t have to comply with any reporting requirements because she doesn’t give away through charitable organizations. Meanwhile, the Gates Foundation – with nearly 1,800 employees – gives away $5.8 billion in 2020, the same amount Scott gave away that year. One of the key factors is that this female billionaire adopts a “no strings attached” philosophy, meaning that each organization can use the funds in any way that they feel appropriate. “It empowers receivers by making them feel valued and by unlocking their best solutions,” Scott wrote on Medium in June.

“A gift like this for a nonprofit is equivalent to a billion dollars,” said Accion Opportunity Foundation CEO Luz Urrutia. Accion is a California-based provider of small business loans with a focus on supporting women and black-owned businesses. The foundation received $15 million from Ms. Scott this year.

Whether the $15 million gift is really the equivalent of $1 billion is debatable. However, there is no doubt that Scott is shaking up the model of philanthropy that billionaires have used. She also advocates for ways to promote social justice and frequently questions society’s system of wealth distribution. “We are all attempting to give away a fortune that was enabled by systems in need of change,” the female billionaire shared this summer.

At a time when billionaires like her ex-husband are realizing their spaceflight ambitions, Scott is using her vast fortune not only to support well-done nonprofits, but also to challenge ways of accumulating wealth and power in America. “Putting large donors at the center of stories on social progress is a distortion of their role,” Scott wrote in the June post. “In this effort, we are governed by a humbling belief that it would be better if disproportionate wealth were not concentrated in a small number of hands, and that the solutions are best designed and implemented by others.”

The most powerful woman in the world

Many of the most powerful women in the world are still under others’ supervision. In the case of US Vice President Kamala Harris, it was her superior, President Joe Biden. The President of the European Central Bank, Christine Lagarde, who is elected by the leaders of the European Union, has an executive board that controls her decision-making process.

Even Melinda French Gates, now a self-made billionaire after divorcing Microsoft co-founder Bill Gates, is co-heading the Gates Foundation with her ex-husband. Ms. Gates once stated that if they couldn’t get along in the next two years, she might leave. Meanwhile, Scott is not limited by such things. For these reasons, Forbes named Scott the world’s most powerful woman for the first time. She takes the place of longtime German Chancellor Angela Merkel, who is about to retire. Before that, Merkel had ranked first 15 times out of 17 years Forbes published the rankings. The two times she didn’t come in at number one was in 2004 – a year before she became prime minister and Secretary of State Condoleezza Rice was the number one, and in 2010 – when First Lady Michelle Obama took the lead.

“My hope is that MacKenzie’s style of giving inspires the philanthropic sector, and inspires other donors to give in a way that supports bold, big visions,” said Favianna Rodriguez, who works to support communities of color in Oakland, California. ” We don’t have a lot of time. We’re looking at the crisis of the epidemic, the economic crisis, the climate crisis, and this moment of racial reckoning.”

With $57 billion left to give away, Scott has big plans to make real change and make a lasting impact on the issues that have gone unnoticed and underinvested in society. ” Generosity is a good thing. The more you give, the more you get in return,” Scott once said.

Grasp Humorous Moments When Libras Are With Their Phone

Quirky Actions Of The Zodiac Signs At Midnight, Revealing In 15+ Funny Memes

12 Hilarious Moments Of A Taurus During Quarantine Time

Check Out Aries’s Personalities With These Celebrities

How Do Zodiac Signs Think And Act When They’re At Work? Watch These 15 Memes

A Series Of Hilarious Stories Between Geminis And Their Parents…Don’t Miss It!

16 Hilarious Signs That Help In Realizing A Scorpio At School

Everyone Will Be Amazed At These Funny, Deep Sayings Of Capricorn