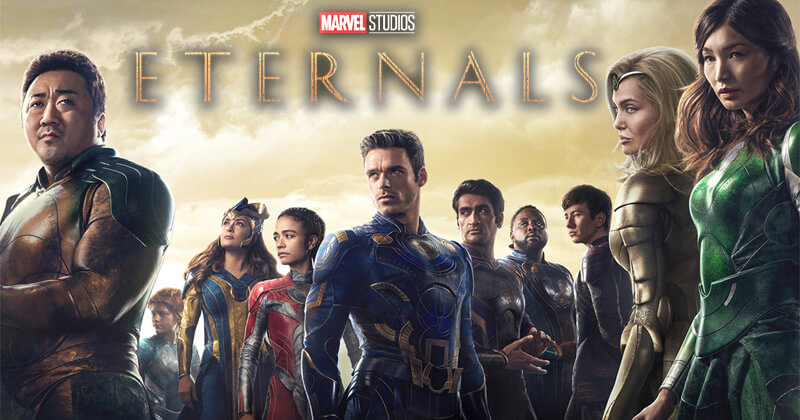 The first Marvel film to be directed and co-written by Oscar-winning director Chloè Zhao, Eternals is a classic story where the staging is certainly the most striking, and Zhao’s touch is visible and traceable also in this new work for sure. Of course, when you think of a superhero film, as some would say, you don’t think of something purely cinematic. But here with Eternals, we find a visually flawless movie. Evocative long shots that look like captivating paintings, suspended and luminous photography entrusted to Ben Davis, as well as elegant battle formations… They all make Zhao’s film a real feast for the eyes even in some moments when the CGI fails entirely to convince viewers.

Harmonious in all respects, Eternals is an origin story that presents to the general public characters who had never been explored by previous works – which is why the whole film takes the time to show and stage every one of them since these new heroes will have great importance in the next phase of the Marvel Cinematic Universe. Five women and five men make up the formation, each of them has some power or characteristic that distinguishes them from the others. Eternals revolves almost completely around Sersi and Ikaris (Gemma Chan and Richard Madden), since their relationship as well as their story will be the center that kicks off many of the narrative twists taken throughout the film.

The fun part is completely entrusted to Kingo (Kumali Nanjiani), who is perfectly at ease in a funny and eccentric way. Sprite, an alien in the body of a child, is an interesting character who likes to live and love as an adult but continually fails due to her physical condition, which is why she is often led to make bad choices. Phastos, the brain of the group, a real engineer, is the spokesperson for a whole minority that until now had never been represented in any other superhero film. And last but not least, Thena (Angelina Jolie), despite having a shorter screen time than other characters, shows up as one of the most multifaceted heroes of all time. Set no longer in destroyed metropolises and cities, Eternals prefers to move the action to places that are distant in both time and space. The film projects the audience back and forth in time, contextualizing the life of the Eternals and Deviants from the creation of the World to today, moving the action to desolate places with an incredible naturalistic force, thus abandoning the destroyed cities that had been so familiar to previous movies. It tells a story with environmental implications where fear is not caused only by the monsters, but also by the Earth itself when it has reached a point of collapse and it’s difficult to escape.

Eternals is definitely a new way of conceiving superhero stories. Inclusiveness and equality are the watchwords of the film, where amazing characters and unexpected implications stand out. As a real ensemble movie, it showcases a variety of heroes, some more in-depth than others, all with strong and recognizable characteristics. In short, this new work of Marvel is indeed a satisfying film for the eyes with a meaningful message that you surely can’t miss.