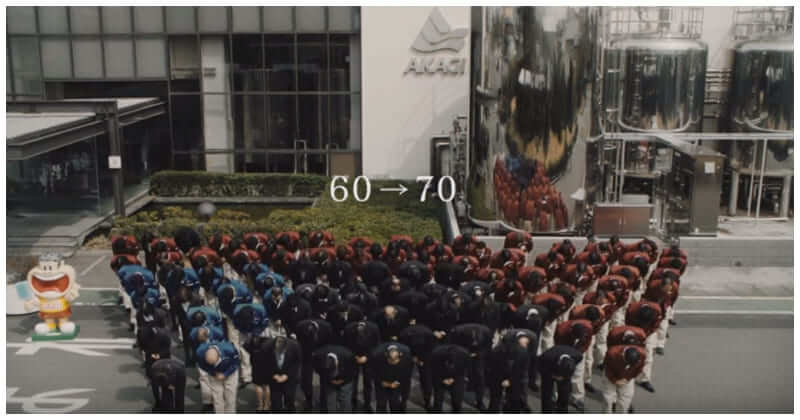 It is normal to increase prices of products; however; the Dessert Firm Akagi Nyugyo posted a video in which its CEO and staffs dressed neatly, bowing and apologizing to customers for increasing the price by 9 cents after 25 years. Over the past 35 years, Japanese have become too familiar with the Garigari-kun popsicle, a product of Akagi Nyugyo Company. Compared to other products in the international market, Akagi Nyugyo is just a small company with no flamboyant marketing plans. However, they do have one point that make the whole world stand in awe of them, which is their business ethics.

At the beginning of April 2016, Akagi company posted a short video. Although it wasn’t a promotion video, it has attracted the attention of millions. Its popularity even crossed borders and spread to neighboring countries.

Chinese social networks, from Youku to Weibo were spreading this video, which featured about 100 people, including its chairman, also its CEO, and other employees at the headquarters in Fukaya city.

In the video, the mentioned people were neatly dressed, bowing together to express their apology as they had to increase the price of the Garigari-kun bars from $0.53 to $0.62. The Garigari-kun line was launched in 1981 for $0.44. It has been repriced at $0.53 since 1991, and remained unchanged for 25 years, despite economy’s ups and downs, until now, together with a thorough apology video.

At the end of the video there was a line that read: “We have worked hard for 25 years; however, now we have to increase the price. A soda-flavored Garigari-kun ice cream will have its price increased from $0.53 to $0.62.” Only after 3 days on YouTube, the video has attracted nearly 600,000 views and thousands of comments. The popularity of this video is also a clear reflection of Japanese firms’ respect towards customers.

“It’s normal to increase price, but they still apologize even though the rise isn’t significant. Don’t worry, we’ll still buy your products even if it is $0.88,” one YouTube user commented.

Another wrote, “Never tried their ice cream before, but after this video I’m gonna. Their apology shows respect for customers. Please support this Japanese company.”

“I believe they’ve done good marketing. Even though they raised the price, they still had a good reputation without enraging customers; instead, they showed their supports towards the company. Furthermore, they attracted more customers thanks to the video. What a strategy!” another shared.

For Japanese, apologies are used frequently. Even an apology can sometimes be substituted for a thank you. To them, this is an act of showing minimal courtesy and politeness in cultural communication. Apologizing is not necessarily admitting a mistake, but also showing a progressive attitude and a sense of responsibility. The story of Akagi Nyugyo company’s apology in 2016 reminded many of McDonald’s Japan apology in 2014. Specifically, in a national press conference broadcast, then-CEO of McDonald’s Japan, Mrs. Sarah Casanova, apologized to customers for discovering that about one-fifth of the ingredients used to make their Chicken McNuggets were imported from Shanghai Husi supplier, which shut down its production after discovering that employees used expired chicken stored on floor.

Mrs. Sarah said McDonald’s Japan has completely stopped cooperating with Shanghai Husi to turn to 2 meat suppliers from Thailand. The scandal caused McDonald’s sales to continuously decline. To reassure customers, McDonald’s Japan has publicly disclosed information about the source of ingredients and promised not to let such an incident happen again.

One thing that some viewers noticed, however, was Mrs. Sarah’s apology. Her resolute eyes when apologizing (a sign of sincerity in the West) seems to have the negative effect on some Japanese, leaving them with no sense of remorse or sincerity.

Figure Out 16 Hilarious Things That Annoy A Virgo

Can’t Stop Laughing At How Pisces Face Their Problems, Showing in 15 Memes

Quirky Actions Of The Zodiac Signs At Midnight, Revealing In 15+ Funny Memes

15 Funny Memes That Help You To Read A Virgo Woman

10+ Hilarious And Relatable Memes To Start The Libra Season