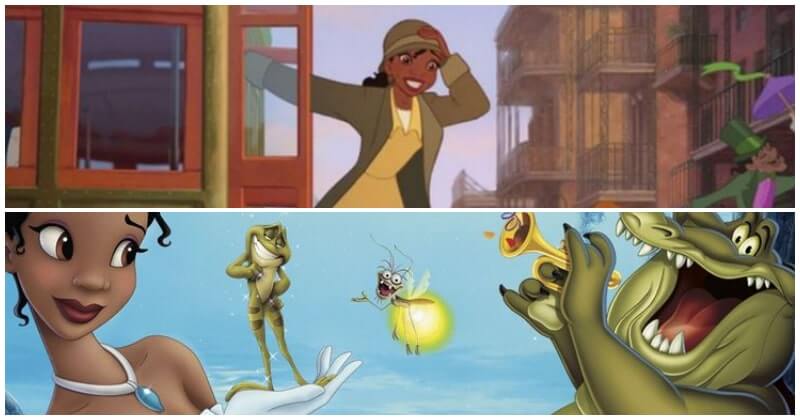 “The Princess And The Frog” is the 49th animated feature film of Disney, and it was released on December 11th, 2009. The film is set in 1920s New Orleans and tells the story of Tiana, a dedicated waitress who dreams of having her own restaurant. She met a prince who was cursed to be a frog by an evil witch doctor and needed a true love’s kiss to become a human again. Unfortunately, Tiana became a frog after kissing him and since then, the young couple had an amazing journey together.

With a multi-cultural cast, gorgeous music, and traditional Disney art, The Princess And The Frog became a huge hit. Tiana’s determination, sass, and reliability enchanted the hearts of the viewers around the world.

However, there are a number of interesting facts and details in the film and its creation that Disney fans may not be aware of! But don’t worry, we bring you a list of ten interesting facts about “The Princess and the Frog” that will blow up your mind. Check out!

#1 The nightmare before Mardi Gras

Every Disney fan knows that the animators enjoy including Easter eggs and references in their films. There are several hidden details in “The Princess and the Frog”. Take a look at the scene where Doctor Facilier requests his pals on the other side for assistance in finding Naveen. If you look closely enough in the shadows, you could notice The Pumpkin King, I guess he had to get a second job. Louis started out as a human in one of the earlier drafts of the screenplay. While the current version of the character is an alligator that wants to join a jazz band, the original was a human who couldn’t play any instruments. Dr Facilier’s voodoo magic gave him the capacity to perform music, but at the cost of turning Louis into an alligator. This was eventually scrapped by Disney. When Mama Odie clutter to find something to help Tiana, look closely at the 1-hour mark. You can see the lamp from Aladdin across the screen. Because the directors of “The Princess and the Frog” also directed “Aladdin”, it makes sense.

#4 How Oprah got the role Oprah Winfrey was employed as a technical consultant for “The Princess and the Frog”. She did such an excellent job and was so enthusiastic about the project that she was cast as Tiana’s mother, Eudora. We get a nice feeling just listening to her voice.

Disney movies take time and work to create. “The Princess and the Frog” took about four years to make, which is rather standard in the animation industry. The process of creating animated films is fascinating, especially for voice actors. The voice performers come in, record a few sequences, and then leave for a few months while animators and the rest of the team put them all together.

#6 It Was The First Hand-Drawn Disney Movie Since 2004 Disney went through a period of artistic and corporate upheaval in the 2000s. Hand-drawn films did not fare as well at the box office once CGI-animated films like Toy Story were released. With The Princess and the Frog, however, things changed. Disney has reverted to the hand-drawn pipeline that was popularized by Walt Disney himself all those years ago. In fact, since “Home On The Range” in 2004, “The Princess and the Frog” was the first Disney film to be hand-drawn.

#7 She’s the only Disney princess who does a job

Tiana is the first Disney princess to have a job, which is another first time for the Disney princesses. Not only that, but she also works two jobs as a waitress. To save enough money to build her own restaurant, she works the night shift at Sal’s and the day shift at Duke’s. She is the only one who has made a living by working hard. Every single PIXAR film has A113 hidden in it at some point. However, we don’t commonly see the magic code in Disney movies. We can easy to spot this code in the center of the tram as Tiana through New Orleans on the cart.

#9 Mama Odie is inspired by a number of characters Mama Odie is a magical wise woman who assists our prince in their quest to undo their frog fate. A variety of real-life figures, as well as fictitious ones, inspired this character. Coleen Salley, a well-known and skilled writer, was the first. The second was Moms Mabley, a legendary comic from the 1960s and 1970s. Mama Odie’s final inspiration comes from another Disney character, Yoda from the “Star Wars” films! Ray the firefly plays an important role in the film’s emotional core. His death is one of the most touching scenes. It’s his link to the sky’s brightest star. You might be astonished to hear that the object she’s been staring at all this time isn’t even a star. It is actually the planet Venus. This is suitable because Venus is the Roman goddess of love, however, it’s unclear if Ray becomes a star or a planet next to her; not that it matters.

4 Great Tom Hiddleston Movies Outside Of The MCU