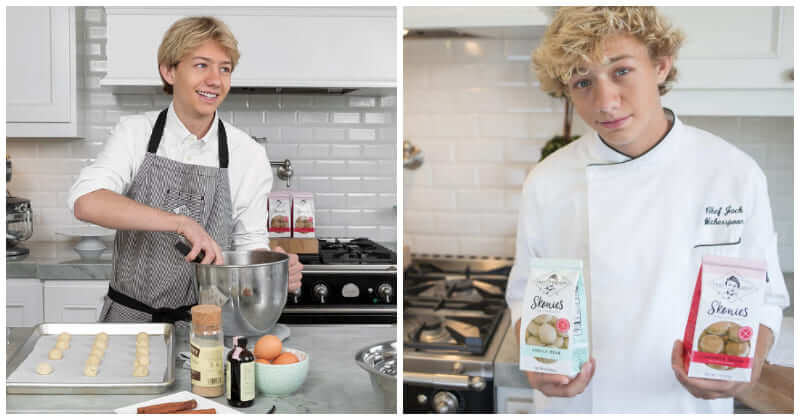 Jack Witherspoon, a 21-year-old chef and entrepreneur, launched his first venture in November 2018, with a cookie called “skonies” – a combination of vanilla bean and cinnamon sugar flavors. The young businessman also authored a cookbook when he was 8 years old, shortly after finishing his 2nd treatment with pediatric acute lymphocytic leukemia. I want to show other kids how to make lemonade out of lemons. That’s been true through everything I’ve done and holds true to my company now too,” Witherspoon shared.

Now, having gained a lot of experience in the business, Jack Witherspoon has donated part of the profits from the sale of books and “skonies” to a pediatric childhood leukemia research institute. To date, the endowment has raised more than $150,000.

Witherspoon said that Chef Jack’s Kitchen is about to sign a deal with foodservice giant Sodexo to deliver “skonies” and other baked goods to eateries in hospitals across the country. Witherspoon was first diagnosed with leukemia when he was 2 years old, having to return to the hospital 4 years later. He tried to find a way to relieve himself during his long days of treatment, when he was forced to miss school.

“I remember it clear as day, I was in the hospital and it was 12:30 at night. There were no kids’ shows on. It was mostly just HGTV and those channels.

This was the early 2000s, so it was just cable shows, and my mom was flipping through the channels and a Food Network show caught my eye, and I told her ‘Wait, wait.’

I watched every show they had while I was there. It was something I could do to keep myself entertained. It really gave me the light I needed when I was in my treatment,” said Witherspoon.

Witherspoon has worked with his mother to catalog the recipes of famous chefs like Rachel Ray and Emeril Lagasse, so they can try them out after he recovers. When Witherspoon was released from the hospital, they began working on their pre-determined schedule.

Witherspoon said they come up with a new recipe every night, while developing the 60 recipes featured in the book he wrote.

“When I was 8, my mom and I sat down and we had accumulated all these recipes and thought we should publish the book,” Witherspoon shared.

“My mom was super instrumental in getting my thoughts on paper because I was only 8 at the time, and she wrote down all the measurements, which are super important when you’re making a cookbook.”

Mommy – my hero and my ‘brain’ Witherspoon’s mother continues to support her son, now a college student, on the path to running his cookie chain business. According to Witherspoon, his mother is the “brain” and great marketer behind the brand. She helped him negotiate and call for capital from potential investors.

“Oh, my mom is my hero. She’s been through everything with me. She sat with me in the hospital 99% of the time, and doing the cookbook with her strengthened our bond even more. She’s my partner in the company, too,” Witherspoon shared.

Witherspoon is majoring in business at his local community college. He hopes that he can transfer to the University of California at Los Angeles while continuing to build his business. He was cancer free for almost eight years after his third relapse when he was 11 years old.

“Sometimes people brush me aside and don’t take me seriously because I’m so young,” Witherspoon said. “I’ve learned being underestimated is not the worst thing. I’m knowledgeable about the company, and people are typically impressed, which makes it easier going into different corporate environments. And even though I’m 19 I look really young, so people think I’m even younger than I am.”

“I have a really unique view of the market because I’m not really a sweets person.  actually came up with skonies because I wanted something that was like a cookie that wasn’t as sweet,” the young entrepreneur said

Chef Jack’s Kitchen is currently selling “skonies” online and at a grocery store in Redondo Beach, where Witherspoon lives. But he was also eager to bake cakes in front of kids who were having to eat boring hospital food, something he too had experienced for most of his childhood.

“The hospital cafeterias are where I want to go because that’s where people will be affected the most,” Witherspoon said.

15 Hilarious And Lovely Memes That Show How Inner Capricorn Is

Find Out 14 Toxic Scorpio Traits That Scare People Away

Get To Know Aquarius Through Their Daily Moments

Being Alone With Limited Social Interaction Can Be A Burden For Anyone, Not Only Cancerians