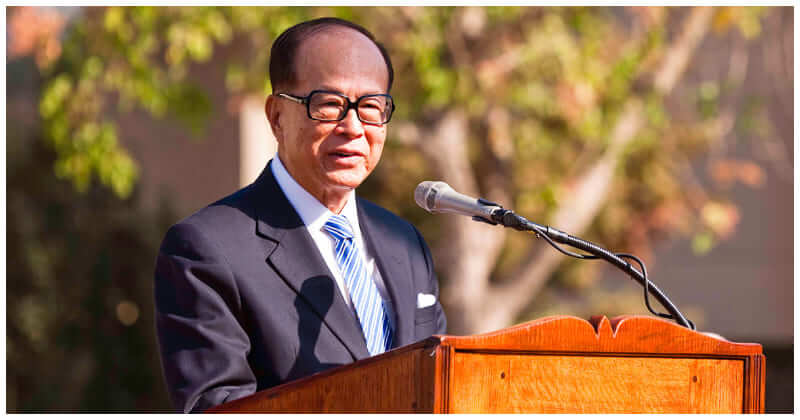 Billionaire Li Ka-shing teaches his children that if they want to know a person’s dignity, just observe them at this particular time, and everything will be clear. True to that, there are special circumstances where we can read people’s mind perfectly. There are people who are nice on the outside, but are actually wolves in sheep’s clothing. There are also people who are not so good at conversation and interaction, but are inherently good. In this world, one can proudly claim that they are good at comprehending mankind. Often, time will tell the good from the bad, but there are also moments that if being paid careful attention, can reveal the characters of someone.

Li Ka-shing is the chairman of Hong Kong’s Hutchison Whampoa Limited and Cheung Kong Holdings with nearly 300,000 employees working in 52 countries. Over the past two decades, this billionaire has always been Hong Kong’s most wealthy man, continuously appearing in Forbes’ billionaires list. Regarded as “superior”, Li Ka-shing is well-known for his business acumen and the ability to yield victories in tough deals.

In addition to his business talent, the billionaire’s parenting philosophies are also widely praised. He once said that it is common sense in life where everyone has their own schemes for personal gain and wants to achieve the greatest benefit. But when confronted with the benefit, the ability to stand unwavering and maintain morality are the only thing that matters. Therefore, in order to acknowledge one’s characters, examine carefully the moment when a conflict of interest occurs. Li Ka-shing once said that his mother had a very close friend. “She was very clever, making others feel comfortable with every word she said. My mother and I liked her a lot; however, later on, my mother stopped getting along with her. When I asked why, she told me that on one shopping occasion, they bought a large bag of fruit and decided to take them home before splitting each one’s part. Later, my mother came to that woman’s house to pick up the fruits, only to find out that her friend kept all the big and good-looking one for her, wrapping the small and bad-looking ones for my mom.

She thought that my mother would not know, but in fact, a sharp-eyed person could tell by just a glance. After that, my mother discovered a few more things through which, she realized that as long as there was a conflict of interest with someone, her friend had to win more at all costs.

My mother didn’t speak out, but she thought that it was meaningless to befriend with such a person, so she ceased to get along with that friend. At that time, my mother told me a sentence that I still remember to this day: To see through a person’s characters, just pay attention to the moment when you and that person have a conflict of interest.

When there is a conflict of interest between two people, especially when one’s benefits are jeopardized, there reaction will best show that person’s characters.” Someone once asked Richard Li Tzar-Kai – Li Ka-shing’s son: “What secrets did your father teach you to make money?”. Richard Li replied, “Actually, my father didn’t teach me any methods of making money. He only taught me the principles of being a man.

Struggling for many years, I discovered a rule: Whenever faced with conflicts of interest, once you manage to keep a clear mind, think for the opposite position instead of only caring about your losses, you will be respected anywhere you visit. Their warm characters are what facilitate their paths, even when confronted with temporary difficulties, as they would always gain support to finish and achieve everything.

On the contrary, those who always want to meet their own rights and benefits will eventually lose their reputation. Such people often find it difficult to find great partners and true friends. Dignities directly determines the success or failure of a person.”

Ancient City Of Uruk Had Advanced Technologies, Believed To Be The Cradle Of Human Civilization

Capture 15 Funny Moments Of A Leo During Quarantine

10+ Facts About Pisces That You Should Know

How Did God Create Zodiac Signs? (Shown In 10 Memes That Anyone Of Us Can Relate)

“You Love Sleeping But Sleeping Doesn’t Love You”, Explaining In 15 Funny Memes

Explore 15 Funny Moments Of A Libra After A Breakup

Who is the happiest person in this world?