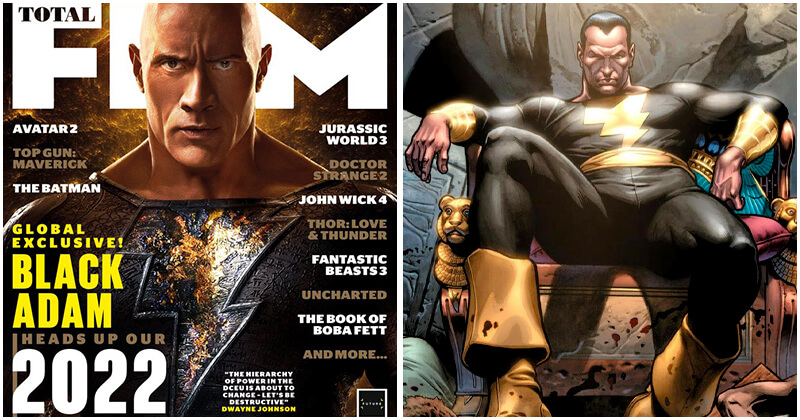 Thanks to new pictures released by Total Film magazine, we can finally take a 360-degree look at the costume of Dwayne “The Rock” Johnson’s Black Adam in the upcoming same-name movie. More specifically, the cover of Total Film’s latest issue is in fact dedicated to the anti-hero himself, and inside, we can come across some preview photos taken on the set. These pictures only show us our protagonist Black Adam, thus glossing over the members of the Justice Society who will be featured in the film. The costume, of which some details have emerged in recent months, shows a design that somehow refers to a dark version of Shazam – who is known as Black Adam‘s historical nemesis. The movie’s storyline is still strictly locked up by now. However, we have long known that members of the Justice Society of America will also be in attendance. In other words, we will be able to meet Hawkman played by Aldis Hodge, Cyclone played by Quintessa Swindell, and Atom Smasher played by Noah Centineo.

We will also see Pierce Brosnan in the role of Doctor Fate, Sarah Shahi in the role of Adrianna Tomaz aka Isis, and the young Bodhi Sabongui in a still unknown but extremely important role. Some other roles that still remain a mystery belong to Mo Amer, Marwan Kenzari, James Cusati-Moyer, and Ulia Latukefu. It was also recently confirmed that in the film we will also see the Intergang, the famous criminal organization of the DC world. Directed by Jaume Collet-Serra, Black Adam will mark this anti-hero’s debut in the DC Extended Universe and this is definitely an event worth waiting for. The first trailer of the movie was shown during the DC FanDome last August, when it was scheduled to hit theaters on December 22 this year. Unfortunately, due to the pandemic, Warner Bros. has decided to postpone the release of the film until a later date.