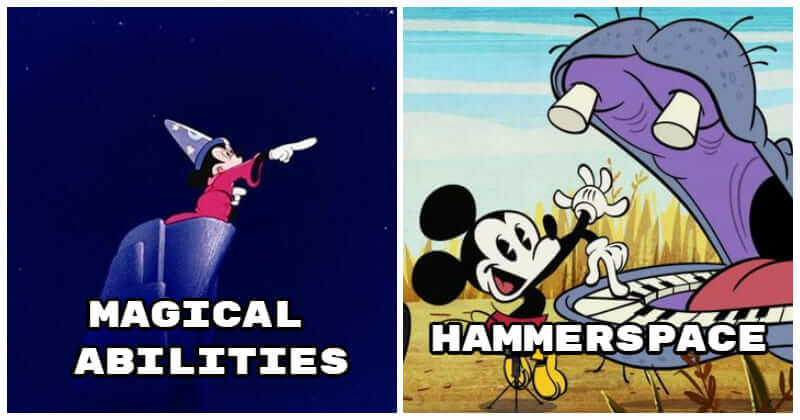 In current popular culture, Mickey Mouse is one of the most recognizable and well-known cartoon characters. Mickey’s charisma and winning smile have been seen by millions throughout the course of his nearly century-long career. With his lovely appearance, Mickey Mouse is the companion of millions of children during childhood. However, his popularity and charisma aren’t the only reasons he’s lasted this long.

Mickey is one of the most versatile characters, able to play everything from a steamboat captain to a wizard. But, as he’s gotten better at his job, his abilities have evolved into indispensable talents that match those of Deadpool or Doctor Strange.

How many powers do you know of this adorable mouse if you are certain you are a die-hard Mickey fan? Make sure to read all the way to the end and don’t forget to leave a comment to tell us how many you can guess! Mickey may have acquired all of his skills from Master Yen Sid, but if the two ever crossed paths in the multiverse, Mickey’s abilities in the mystic arts would equal Doctor Strange’s. The mouse’s tremendous magic is indelibly etched into his character, given that his magical talents exist outside of Fantasia and spill into other Disney canon works. It’s one thing for cartoons to use their skills to modify physics and other concepts in their own universes, but things get a little more tricky when they enter the human realm. Mickey’s powers aren’t confined to Toon Town, as evidenced by his appearances in films like Hollywood Party, Who Framed Roger Rabbit, and other live-action/animation hybrids. Without getting into too much detail about the complexities of Keyblades and their masters, the fact that Mickey can summon and deploy this magical weapon is a strong move in and of itself. In the popular JRPG, he is not only the king of his own Disney land, but he can also wield a reality-bending blade. This is a skill that few fans seem to realize, yet Mickey can charm or talk his way out of a jam better than the majority of Disney’s cast. One of the more recent cartoons even highlighted the fact that it’s nearly difficult not to like him. With his upbeat personality, he can pretty much solve any problem. Another talent that most vintage cartoon characters appear to have is the capacity to teleport. The ability to conjure an object from behind one’s back is certainly beneficial, but Mickey and others like him appear to have no boundaries to what they can summon. Mickey has created everything from his vehicle keys to full-fledged props and setpieces for comedy bits. He has the ability to make artifacts that are larger than his own body on occasion. Mickey has demonstrated his ability to play a wide range of musical instruments without embellishment. From the harmonica to the piano, it appears like Mickey only needs to sit down and play an instrument to become exceptionally talented at it. Despite the fact that Mickey is a global character, his ability to interpret is something to be admired. Mickey has shown an ability to fit in with a variety of cultures, from French to Portuguese and more, in addition to being able to comprehend nonverbal communication, as evidenced by his dog, Pluto. It’s more of a talent than a superpower, but it’s one that has benefited his character much. Most iconic cartoon characters can shape-shift in addition to being resilient to the most lethal wounds. Mickey has done this a number of times over the years, ranging from adjusting his body to fit into a small place to fully changing his appearance to impersonate a well-known celebrity (showing the range and depth of his abilities). Mickey, to be honest, is more manipulated than other cartoon characters, especially in Paul Rudish’s newest shorts. He has the ability to morph objects into other objects, govern concepts such as color, shape, and light, and even turn gravity into a toy under the right circumstances. It’s quite tough to kill or permanently damage a toon outside of Who Framed Roger Rabbit. As a result, Mickey is logically invulnerable to injury. He may not be as impervious to harm as his companion Goofy, but he can withstand more than most.