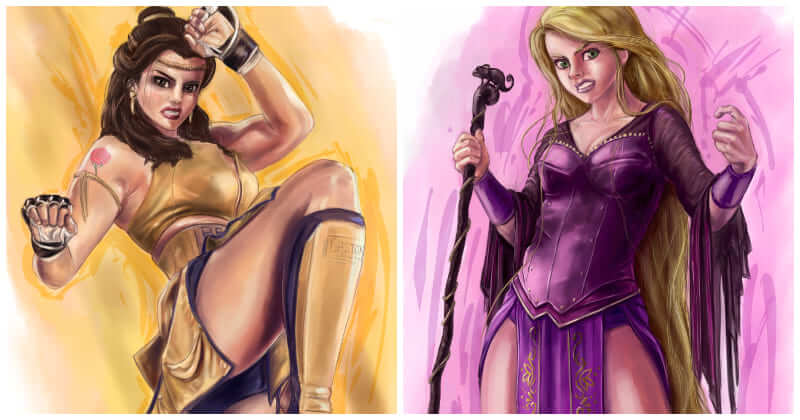 Disney princesses have long been a major source of inspiration for many artists, from charming everyday attire to breathtaking ball costumes. We’ve seen artists transform Disney princesses into tattooed hotties, pirate fairies, modern teens, and pin-up models. One of the themes that artists love to use to reimagine Disney princesses is to turn them into someone tougher, more fierce like warriors or fighters. Let’s be honest: who wouldn’t like to witness lovely, compassionate princesses undergo makeovers in order to become a stronger version of themselves?

Josh MC, an Australian digital artist, made our dreams come true with the release of his Disney Fighter series. Here’s a series of ten illustrations in which he transforms iconic Disney princesses into fighting warriors. Do you know what’s more special about this series than seeing Belle or Cinderella fully armed? That’s the fact that Josh put a lot of effort to tell the backstories of those fighters! He’s very dedicated and wonderful, right?

Don’t hesitate any longer, let’s check out these wonderful artworks below and don’t forget to tell us which one is your favorite in the comments! Start the series with the gentle and kind Cinderella in the fiercer version – a ninja warrior! Josh doesn’t actually mention a backstory for this makeover but guesses how long it took him to finish this? 7 hours! Snow White is probably the sweetest and most innocent of Disney’s leading ladies, so let’s give her a total makeover. She is now a fierce girl inspired by Lisbeth Salander who gained her street fighting abilities growing up in the decaying suburbs of a bleak city dominated by the Seven Drug Lords.

#3 Ariel from The Little Mermaid Ariel changed a lot from a cute redhead girl to a powerful warrior, didn’t she? Her new backstory states that Ariel sold her voice to the sea witch in order to become a powerful human warrior and compete in a global fighting contest. Jasmine, one of our hottest princesses, has arrived! Jasmine enters a combat tournament to avoid an arranged marriage and prove to her father, the Sultan, that she is capable of managing her country.

#5 Belle from Beauty And The Beast The artist has transformed our beloved and kind Belle into a Muay Thai kick-boxer! Belle’s new backstory is that she turned to self-defense after being kidnapped and held hostage as a child, and she is now a world champion kick-boxer. Pocahontas is an environmental activist and the descendent of a renowned Powhatan warrior in her new backstory, and she enters the combat contest to physically fight for nature. Isn’t this so fascinating?

#7 Tiana from Princess And The Frog Tiana’s new backstory has her as a military fighter competing in a fighting tournament to prove she is capable of commanding her own squad. The artist also stated that this was the most difficult character to create thus far, owing to her original outfit colors of light green and pale yellow. Aurora, our sleepyhead, has awoken from her long rest and has transformed into a fearsome fighter! Her backstory has changed, and she is now a professional wrestler named Briar Rose, who goes by the ring name Aurora. Mulan, given that she was already a badass warrior, to begin with, proved to be a bit of a struggle to reinterpret. Eventually, she adopted ideas from both Chun-Li and Kitana and transformed herself into an assassin who is a master of disguise. Here comes one of Disney’s funniest princesses – Rapunzel! Her new backstory is that she is an imprisoned sorceress who escapes her solitary confinement.