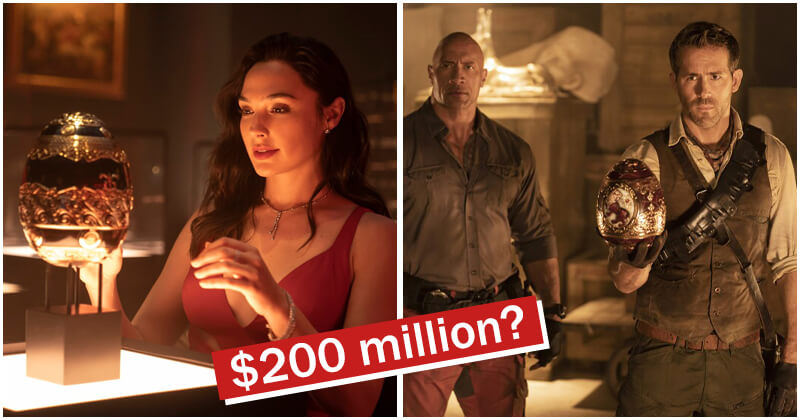 Arrives today on Netflix, Red Notice – an original film directed by Rawson Marshall Thurber (who is also the director of DodgeBall, We’re the Millers, Skyscraper, and more) and stars Gal Gadot, Ryan Reynolds and Dwayne Johnson aka The Rock is ready to give it all. Netflix spent 200 million dollars on Red Notice, making it the most expensive movie ever produced by this streaming platform. After seeing it, our only question is: where did all this money go? Honestly, it seemed like that amount mostly invested in the three leading actors – who are all A-listed stars of Hollywood, rather than the content of the movie itself. Set in different parts of the world from Rome, Spain to Russia, what immediately catches the eye is its staging, made and designed for a product intended solely and exclusively for VOD distribution. The attention to every detail, the computer graphics, and all that technical parts should be excellent when it comes to a purely cinematic product, but in this case, they are sadly quite poor.

The script is based on more than one solid plot, and the continuous exchange of jokes between the characters is sometimes successful, but sometimes not very impressive. Ryan Reynolds has continued undaunted to systematically play the same role for a long time, and The Rock is just the same. On the other hand, the choice of Gal Gadot in an antagonist role is quite interesting since this part that for years has always been entrusted to men.

Rawson Marshall Thurber is the big name behind some now cult films, but with Red Notice, he fails to match some of his previous works. His newest work is part of that Netflix trend of hybrid films, which is characterized by a mixture of genres and is designed more to entertain than to make people think or otherwise. 6 Underground produced by Michael Bay a few years ago or The Old Guard (which will soon have a sequel) are examples of what we are talking about. Red Notice is definitely a fun and irreverent film, typical of the filmography of director Rawson Marshall Thurber. With such an out-of-the-ordinary trio, this action thriller comedy, despite being not convincing on the technical and staging side, manages to entertain thanks to various twists scattered here and there during its development. Designed to be fully enjoyed in streaming, it will certainly be able to snatch not only a few laughs but also many audiences’ love as well, even though we can not say the same about the critics.