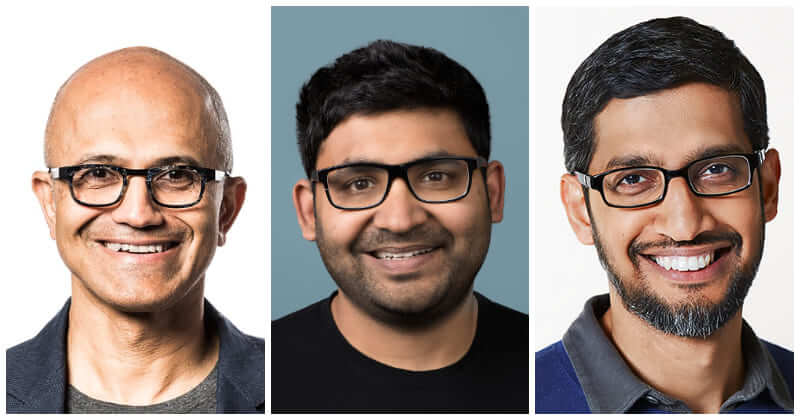 Today, CEOs of many US tech giants such as Microsoft, IBM, Google, or most recently, Twitter, are all born in India with their own secrets to reach the top. “Is this the Indian virus – the ‘Silicon Valley CEO virus’ – for which there is no vaccine?” humorously commented billionaire Anand Mahindra, leader of Mahindra Group.

Ever since waves of graduates from the Indian Institutes of Technology (IITs) – the country’s top government-funded engineering colleges – started arriving in Silicon Valley in the 1980s in search of better job opportunities, they have broken down barriers in the US. Stories of those successful leaders have altered common views of Indians. Additionally, several theories and explanations have been brought up.

An Indian expert said: “Indian engineering graduates started coming to the US in the late 80s to earn master’s degrees in computer science and electronics.

This rise means a fall in the number of Americans studying the same major. That accounts for the majority of IT professionals in the US being Indians.”

A number of similar aspects can be found in these CEO’s journey of becoming big tech leaders, besides their own trajectories.

This journey involved an immersed focus on math and science from an early age. The majority of Indian parents would try to direct their children towards these subjects in a serious approach as they are the most secured path leading to achievements.

“Parag has always liked computers and cars. Math was his forte,” mother of the newly appointed Twitter CEO shared.

The competition in the country with a population of 1.3 billion is gradually becoming fiercer. There are not much who can pass the IITs entrance exam. This year alone, only 16,000 were selected out of 2.2 million.

“IIT’s rigor goes beyond MIT’s,” said Ashok Alexander, a former McKinsey partner. “It plays a huge role in the development of CEOs.” The newly appointed Twitter CEO was one of the best students in Maharashtra state who passed the IIT Mumbai exam.

One of Agrawal’s former schoolmates said his academic record was excellent, outstanding others even when he was put in a group of best students. Every year, employers in India rely on IITs to find the best of the best. This year, many graduates have been offered local jobs with starting annual salaries of more than 20 million rupees ($266,500).

Universities are also ideal hunting grounds for US multinationals and act as the perfect “feeder school” for Silicon Valley’s tech giants.

In a country with one-fourth of the population are poor, with water and electricity shortages, Indians are used to harsh environments, which stimulate innovation.

The Indians have a word for the ability to solve problems with ingenuity and very limited resources, “jugaad”, which is translated as “hack”  in modern parlance.

The mentioned concept has been investigated by many business professionals, including the book Jugaad Innovation, in which the Indian authors explored how being more flexible, efficient with limited resources have helped businesses breakthrough in times of depleting resources.

In a 2016 article in Stanford Social Innovation Review, scholar Jamal Boukouray advocated the application of “jugaad” in social innovation leadership.

“What modern companies need today is a brand new CEO who eats, breathes, speaks and essentially acts sparingly in their ecosystem, while thinking broadly about greater potential of the organization”, wrote Boukouray.

Ajay Lavakare, who left IIT Delhi for Silicon Valley in the late 1980s, says the reasons for a large number of Indians topping Fortune 500 are the technical and analytical skills taught in college as well as a well-rounded education. According to Lavakare, over the years, a system of mutual aid in the community has emerged. The first generation of successful Indians in this industry were keen to help the latecomers to avoid the risks. The result was an ecosystem of entrepreneurs who mentored and funded startups.

However, as the new generation of India gradually achieved certain successes, a new problem arose. From Agrawal to Pichai and Nadella, the majority of Indian CEOs in the US are male. Vimeo CEO Anjali Sud, Flex’s CEO Revati Advaithi and Arista Networks CEO Jayashree Ullal are among the few Indian women active in the industry.

Somewhere among Indian IITs, though, there are certainly young, innovative professionals looking to break boundaries in Silicon Valley.

Collection Of Hilarious Moments Showing Sagittarius Is A Sweet Addiction