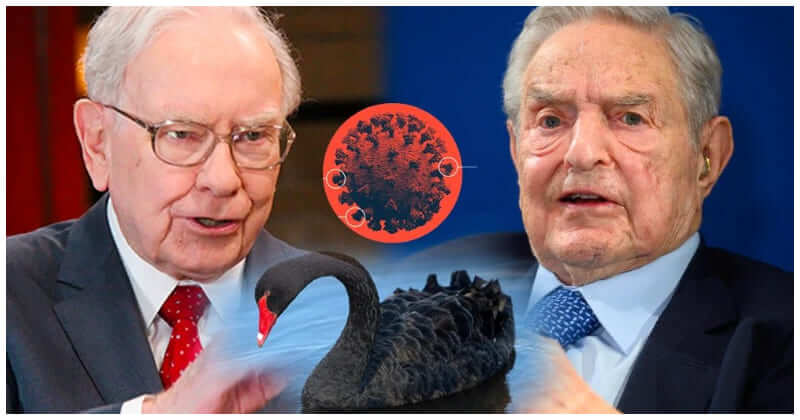 Less than a week since its discovery, the Omicron variant of the Covid-19 pandemic has spread to many countries around the world. Predictions about the danger of this mutation have caused many countries to take drastic actions and as a result, the global market has wobbled.

The Dow Jones Industrial Average recorded its worst session since October last year, losing 2.5%, while the S&P 500 and Nasdaq Composite fell 2.3% and 2.2%, respectively.

The gold, cryptocurrency and currency markets are also reeling from information that the new variant is more dangerous than the Delta one and may be resistant to vaccines.

Ignoring the true story about the danger of Omicron, investors worried because of the effects of Omicron and considered it a “black swan”. So what is it and how can skilled speculators place the right bets in that context?

Who knows the unexpected? Conceptually, a “Black Swan” is an extremely rare and unpredictable economic phenomenon that has devastating consequences for the economy. The term was coined by Professor of Economics Nassim Nicholas Taleb, a former Wall Street trader, and is used to highlight rare events that exceed normal expectations, having profound effects on the global financial and economic systems.

The name “black swan” is based on an old saying that swans will not be black, but there are exceptions when this species actually exists in Australia.

According to Taleb, all methods in current market use past data to predict the future. However, it is clear that the past cannot completely predict the future, especially events in the financial markets. Relying on historical data will always slow us down from opportunities that have never appeared before in the market.

Investors and analysts often focus on what happened in the past but rarely consider any possible black swan events, because they have no precedent. This leads to the often-documented heavy consequences of black swans because it’s usually not predictable.

No one predicted the 9/11, the 2004 Southeast Asian tsunami, the 2008 financial crisis, or the Fukushima Daiichi nuclear disaster… Even the 2015 oil glut was one of the unprecedented, unpredictable events.

Most recently, the Covid-19 pandemic and the Omicron variant are also considered a “black swan” when it surprised investors in the context of gradual economics reopening.

Fortunately, this time the “black swan” may not be not too heavy as countries take early preventive action and the Omicron variant has not yet caused any major damage beyond the predictions of experts.

If Omicron is really as dangerous as scientists warn when it comes to vaccine resistance and explodes globally, perhaps the market will not simply drop like that.

Volatile as it may sound, there have been investors who succeed through a series of black swans, even making great profits from it.

There are two typical strategies of investing when the market fluctuates, one is to accept the risk of surfing by George Soros or buy and keep long-term holding by Warren Buffett.

Should the risk be taken? For speculators who love to take risk, especially with black swans, the name George Soros is nothing new. He has been known as the greatest financial investor in history, the greatest specular of the 20th century, the hero and villain of the world, the man who wobbled the global financial markets…

The name of George Soros is best known in the world financial markets through the British pound speculation in 1992.

On Black Wednesday, September 16, 1992, George Soros suddenly became famous for shorting over $10 billion worth of British pounds and profiting from the Bank of England’s hesitation to raise the local currency interest rate to par with the interest rate in other economies in the Organization using the European exchange rate mechanism, or let the local currency float.

In the end, the Bank of England was forced to pull the pound out of the European exchange rate mechanism and devalue it. George Soros earned about $1.1 billion in this deal and is known as “The Man Who Broke the Bank of England”.

Similarly, Soros also attacked the Southeast Asian currency during the 1997 financial crisis and the Russian ruble during the 1998 crisis.

Imagine if information about B.1.1.529 variant was discovered in advance before the World Health Organization (WHO) had an emergency meeting and named them Omicron, then how big investors can make profitable trades from the market? Contrary to Soros’ style is Warren Buffett with the nickname “the Sage of Omaha”. Since his first investment in 1965, after more than 4 decades, Warren Buffett has over $50 billion in his pocket and no stock investor has ever surpassed him in terms of return on capital.

Unlike speculators like Soros who take advantage of market fluctuations to make a profit, Buffett does not only view stocks as expensive or cheap based on the assessment of the law of supply and demand but also the profitability of business activities from the enterprise itself.

In fact, the legendary investor doesn’t care at all about how the market works. When he invests in a certain stock, he doesn’t care if the market realizes its value in a few years or not, but rather how much money the business will make in the coming years.

Thanks to this business strategy, Buffett’s investments are profitable in the long run and are rarely affected by black swans. Imagine you determine the technology segment will continue to be profitable for the next few decades regardless of any black swan factors, Omicron or not, the stock will still be profitable for you if your prediction is exact.

What Is The Best Cooking App? BigOven Or Cookpad?

16 Funny Memes To Get Ready For The Upcoming Virgo Season

These Superb Smoothie Bowls Of This Teenager Are Unbelievably Fascinating

15 Hilarious Reasons Why Aquarius Is Tough To Approach

15 Funny Moments Of Libras In A Relationship

Reveal 15 Interesting Secrets That Help You Attract A Leo

Jocular Memes That Disclose The Biggest Fears In Each Zodiac Sign

21 Clever Life Hacks Showing That Human Creativity Has No Limits

25 Anchors, Zodiac Signs, And Other Trendy Tattoo Designs Everyone Will Want In 10 Years