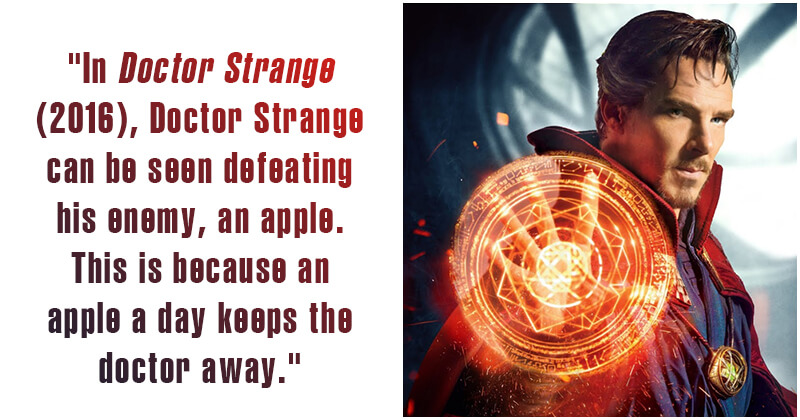 Every good movie has some hilariously bad details that confuse even the most loyal fans, and of course, Marvel blockbusters are no exception. In fact, the more Marvel fans rewatch their favorite films, the more problems they spot. And eventually, many of these ridiculous twists somehow end up being gushed about on r/shittymoviedetails – the biggest subreddit dedicated to the craziest scripts in cinematic history with 684k members.

From Black Widow throwing herself off a cliff in Avengers: Endgame to Captain America trying to choke a robot in Avengers: Age of Ultron, there are so many funny things about the MCU fans can’t help but question, and some even come up with their own brilliant answers to solve the puzzle themselves!

Now, just scroll down and discover the 24 most upvoted Marvel posts in this interesting group, they are guaranteed to make you burst out laughing, or at least put a smile on your face!

#1. In Spider-Man 2 (2004), despite his strongest instincts, Peter Parker decides to look the other way after seeing a man getting mugged. This marks his transformation into a true New Yorker. #3. In Detective Pikachu (2019) Ryan Reynolds had to wear a hat because he was still growing his hair back after filming Deadpool (2016).

#4. In Avengers: Endgame (2019), Scarlet Johansson throws herself off a cliff so she doesn’t have to be part of the girl power scene. #5. In the movie Ant-Man, Ant-Man is seen running on a gun. This is a reference to the fact that in addition to disregarding physics, the movie disregards the rules that they themselves made up such as Scott Lang would maintain his strength and mass when shrunken. #6. In Avengers: Infinity War (2018), the heroes can breathe on Titan. Which shows that Thanos’ species breathed like us. Which proves fish are stupid and need to learn to breathe right. #7. In The Amazing Spider-Man 2, the boy at the end of the movie is actually Miles Morales.

#8. In Wonder Woman (2017), Diana is able to get to London from her remote island in only a day because she is an Amazon, and therefore qualifies for next day shipping #9. In Doctor Strange (2016) Wong doesn’t find any of Strange’s jokes to be funny. At the end of the film Strange makes a bad joke and Wong laughs. This is now because Doctor Strange is his boss. #10. In Spider-Man (2002) it took 5 weeks to film the lunch tray scene because after each failed attempt Tobey Maguire would get down on his hands and knees and eat the food off the floor. #11. In Avengers: Endgame (2019), Thanos says “I am Inevitable”. This is a mistake from the filmmakers because he is actually Thanos. #12. In the original script for Avengers: Infinity War, Thanos sought to end overpopulation by snapping away all costs, stigma, and obstacles to effective birth control. Conservative lawmakers blocked it. #13. The final level of Black Panther (2018) requires no inputs from the player. This is because it is actually a movie, not a videogame, despite the visuals suggesting otherwise. #14. In Avengers: Endgame, Fat Thor is the butt of many jokes, this is because Marvel thinks Survivor’s guilt and PTSD are funny subjects. #15. In Avengers: Endgame, Rhodes admits to Nebula he “wasn’t always like this”, which is true. #16. In Black Widow (2021), a BMW is shown to have functioning turn signals. This is to show that the movie is fictional and not based on a true story. #17. In Wonder Woman 1984, Steve is amazed by an escalator despite them being commonly used in stores by the time he died in 1918. #18. In Avengers: Age of Ultron, Captain America attempts to choke Ultron. This is because he is from the 1930s and doesn’t understand what a robot is. #19. In Avengers: Endgame (2019), which takes place 5 years in the future, we see Korg using a PlayStation 4 because the PlayStation 5 is still sold out. #21. In Avengers: Endgame, Thanos tells Scarlet Witch “I Don’t Even Know Who You Are”. This is because he can’t figure out which Olsen sister she is. #22. If you flip the title card for Venom 2, you can reveal the real reason the movie was made.

#23. In Avengers: Endgame (2019) when Hulk is about to snap his fingers we see everyone getting ready for a possible blast, but Hawkeye has his bow drawn, as if he’s ready for a fight.