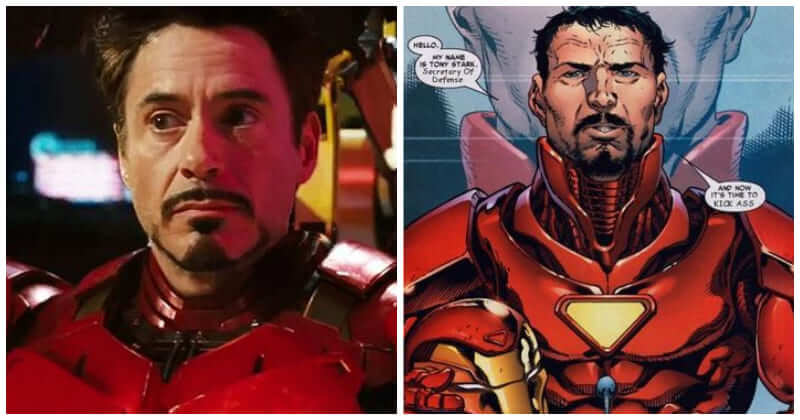 Kevin Feige, the producer of blockbuster Marvel movies, has been creating movies following the original comic books since the time MCU movies debuted in Hollywood in 2007. Kevin developed each superhero based on its equivalent and chose the best actors and actresses to portray the characters, ensuring that they look exactly like the comics.

We’re all aware that Marvel’s costume designs are out of this world; whether it’s Iron Man’s outfit or Hawkeye’s suits, they’re not easy to create. Thanks to the incredible image-building stage, Kevin has truly transformed comic books into live-action films. However, sometimes you have to make sacrifices for the greater good, even if it means deviating from the original version.

Below are 18 original appearances of MCU characters in comparison with their movie looks. Which of the two versions do you prefer? Please let us know in the comments! Heimdall may be vegetarian in the film, but he’s definitely not wearing fake furs in the comics. This guy is wielding a sword as well as his beloved helmet. Alas! Someone who is concerned about safety! Keep an eye out for the new girl on the block. The one from the movie appears to be more tough and unconcerned with her haircut (is that a ponytail in the right picture?). But Valkyrie from the film preserved her Asgardian cloak from a comic book, and it looks fantastic! Groot from the Marvel Cinematic Universe is more of a free-spirited hippie kind. What, after all, does he need clothes for? Taika Waititi has left the Grandmaster in his human skin, but what lovely makeup he has in Ragnarok! In the film, he never wears gloves. Is it because Jeff Goldblum’s strength is manifested in all of his small gestures? Bucky from the comics resembles Robyn Hood more than a soldier. However, the comic book and film versions of The Winter Soldier are identical. The Russo Brothers want to keep things simple. Steve looks a lot as he does in the comics in the first film. The colors are the same, as is the helmet and shield (well, not a vibranium steel alloy one). In his most recent films, he still wears that dark blue navy suit, along with a number of others, but Chris Evans’ jaw and energy are appropriate for the character. Don’t weep! We have to believe that she, like the rest, will be fine. In terms of her outfit, Peter Quill would have wanted for her to wear the one from the comics, but isn’t it a little too old school? Stan Lee has stated numerous times that Robert Downey Jr. was born to play Tony Stark. And we completely agree. In terms of his appearance, Jon Favreau tried to stay as true to the comics as possible, and the rest is history. She may have a canonical romance with The Vision, but in the film, she lost her mask/hat, which is probably for the best. That device couldn’t possibly be very handy during battle scenes. Tilda Swinton doesn’t have a beard in Doctor Strange, but she’d look just as awesome if she did! However, the Ancient One from the comics is an elderly man, whereas the one in the film is a woman…isn’t she? With each new Spider-Man film, Petter’s aunty gets younger and younger. She is not a stereotypical old woman in Homecoming. As the guy from the shop next door described it, she’s more like a “hot Italian woman.” Wakanda forever! Fewer gold details and the disappearance of His Majesty’s cloak The MCU’s Black Panther appears to be more modest, if not more elegant. The entire black cannot be defeated. Mischief-maker, Thor’s sibling, and Odin’s son (adopted, as we all remember). Thankfully, Loki hasn’t lost his helmet during his MCU-ization! Thor had been traveling without his helmet the entire time! During his fight scene with The Hulk in Thor: Ragnarok, he appears to be closest to the comic books. But by this point, he’s lost both his lovely long hair and the hammer. The clothing in the rest of the film is very faithful to the original, and Chris Hemsworth really achieves that god-like aspect. Arrows are exactly where they should be, and this is the most critical aspect of Hawkeye’s costume. The MCU’s Hawkeye doesn’t have a helmet or as many colors in his clothing in the film, but that doesn’t stop him from being a fan favorite. In the comic version, this delectable cinnamon bun, whom we last saw in Infinity War, appears more like a fighter. In the movies, Mantis wears a less natural leather costume. It even has a slight resemblance to Loki’s aesthetic. In the films, The Vision’s dazzling colors faded and he became darker. The design of the suit, on the other hand, is extremely similar to the one in the comics.

30 Will Santino’s Fresh, Comical Drawings That May Get On Your Nerves With Twisted Plots