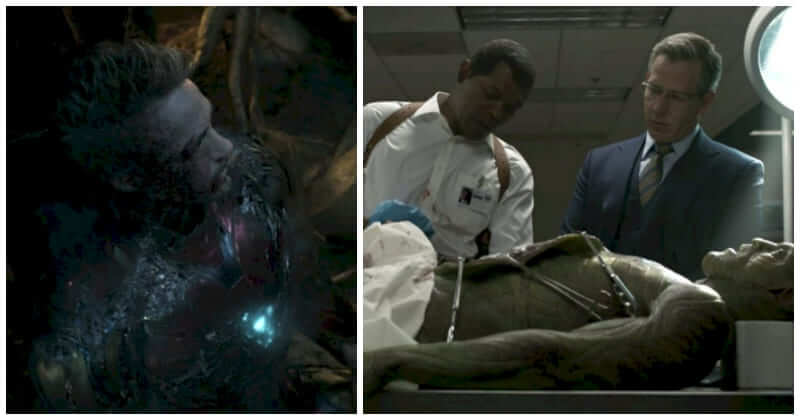 The script is something very important for an actor to do his job. Actors are required to follow the script and try their best to express the characters they are portraying in the most honest way. However, there are some improvised moments when the cast’s acting was off the script but ended up showing the best results. Here are eleven moments that you’ve never thought to be unwritten for Marvel movies, but the actors did it so well. Scroll down to enjoy.

Maybe one of the most famous scenes in Marvel movies that people love to talk about more and again is Tony’s death scene in Avengers: Endgame. But in an interview with Pinkivilla, Holland said that Downey Jr., who portrayed Tony Stark, acted the scene with no real script.

“They kind of brought us to set, they kind of told us what was going to happen or what they wanted to happen, and then we sort of just improvised, if I can remember correctly,” Holland said.

“Iron Man” ended with a scene when reporters surround Tony Stark (Downey Jr) and ask him whether he’s a superhero. Tony was supposed to say “No”, but at the last minute, throws away a notecard with a pre-written alibi and tells the crowd “I am Iron Man”. Telling the publication in 2018, Kevin Feige (producer and president of Marvel Studios) said that was totally a moment Downey Jr. improvised, but they thought it was suitable for the scene and decided to keep it.

This is the most touching scene in “Avengers: Infinity War” when Vision (Bettany) asked Wanda Maximoff (Olsen) to destroy the infinity stone that keeps him alive. The director decided to let the two ab-lib during the scene so that they can get the most sincere, emotional dialogue. Bettany even shared with IMDb that he and Oslen can feel the “silly” energy on set when they realized how much they had been improvising.

#4 “Captain Marvel” (2019): Samuel L. Jackson looked at a naked Skrull without being prompted.

Sharing with the Captain Marvel DVD commentary, codirector Ryan Fleck said that they didn’t write in the script that Jackson should look at the Skull body without a prompt. But when Jackson unintentionally acted that way, they decided to keep it because it was pretty funny.

#5 “Captain America: Civil War” (2016): Downey Jr. came up with a line on the spot when Tom Holland forgot his blocking.

“Captain America: Civil War” contains the scene when Tony first met Spider-Man to recruit him to the Avengers. For a brief moment, Tony stood before Peter’s bed and said: “I’m going to sit here, so move your leg.” When it was shown on TV, the scene seemed very natural, but in fact, there was a different story behind it.

According to Marvel Studio News, Holland was supposed to move over on the bed, but he forgot, so Downey Jr. reminded him to scoot by improvising the line.

In “Spider-Man: Homecoming,” there is a scene when Peter tried to hug Tony to end the conversation, but his mentor brushed him off to open the car door instead. Holland later answered an interview with Kevin McCarthy that the scene actually has a lot of improvised moments. It was just one of the examples when they didn’t get the partner.

#7 “Guardians of the Galaxy” (2014): Chris Pratt improvised dropping the orb so well that it seemed like an accident.

Guardians of the Galaxy’s director James Gunn wrote in his 2020 Tweet that he thought the slip-up was an accident, while Chris Pratt confirmed in his own reply that he did it on purpose. The actor also asked for forgiveness than permission for going off the script.

#8 “Thor: Ragnarok”: Hemsworth said a child visiting made the “friend from work” line.

In “Thor: Ragnarok,” Thor was surprised to see his old friend Hulk (Mark Ruffalo), he shouted: “We know each other! He’s a friend from work!” Telling HuffPost, Hemsworth portraying Thor said that the iconic line was inspired by a child visiting them on set.

“We had a young kid ― a Make-A-Wish kid ― on set that day, and in between the takes I was talking with him and coming back and forth,” Hemsworth said. “And he goes, ‘You know, you should say he’s a friend from work.'”

Taking about this scene, director Taika Waititi shared with the “Empire” podcasts: “That was his idea,” Waititi said. “There’s a lot in things in the film which have come straight from his input. I’m very lucky to have someone around who’s very invested in the emotionality of the scenes, but wants to have fun.”

Before “Thor: Ragnarok” (2017), Hemsworth also improvised two smaller moments when he unexpected hang up his hammer on the coat hook (“Thor: The Dark World”) and said “Another” after smashing a cup of coffee (“Thor”).

Sharing about this rumor, Holland told in a GQ video: “It is improvised, because basically we did a long improvise, and it wasn’t great, but it sparked a great idea. And then we reworked the scene, and then this was born.”