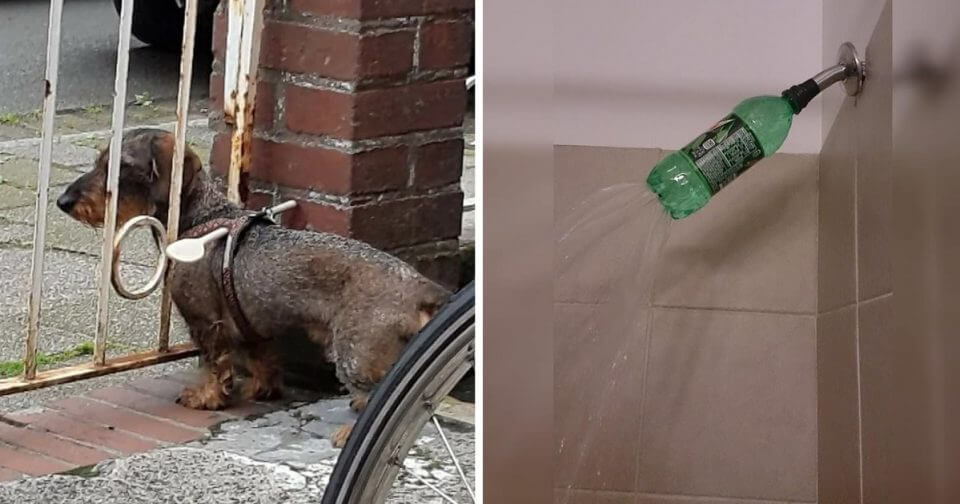 Sometimes, the universe likes to throw random challenges our way. Making the best out of a bad situation can be pretty difficult, but if you have amazing engineering skills and a boundless pool of creativity, there’s nothing you can’t do. Case in point, these 50 engineers who fashioned makeshift solutions to make the best out of the worst situations. 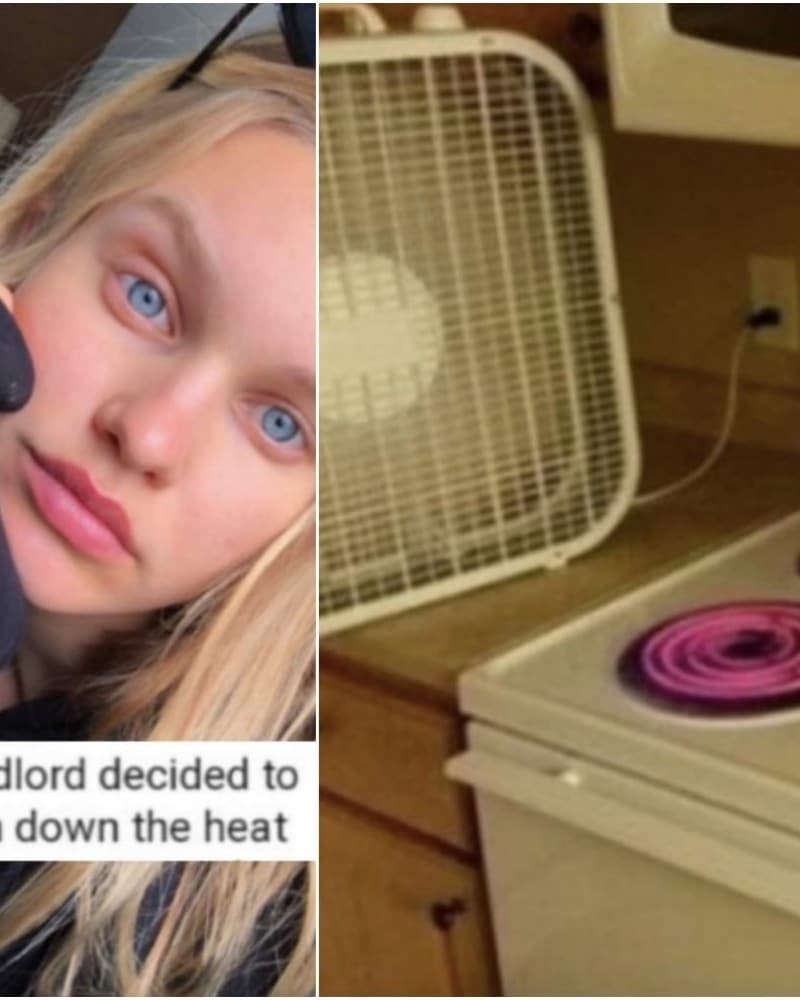 If you don’t have a lock wide enough to keep the latches shut on your outdoor shed, what choice do you have to protect your power tools from getting stolen? This engineer didn’t let anything stop them. They drilled a hole into a wrench, slipped the wrench in between the latches, and used a regular-sized lock to keep the wrench moving 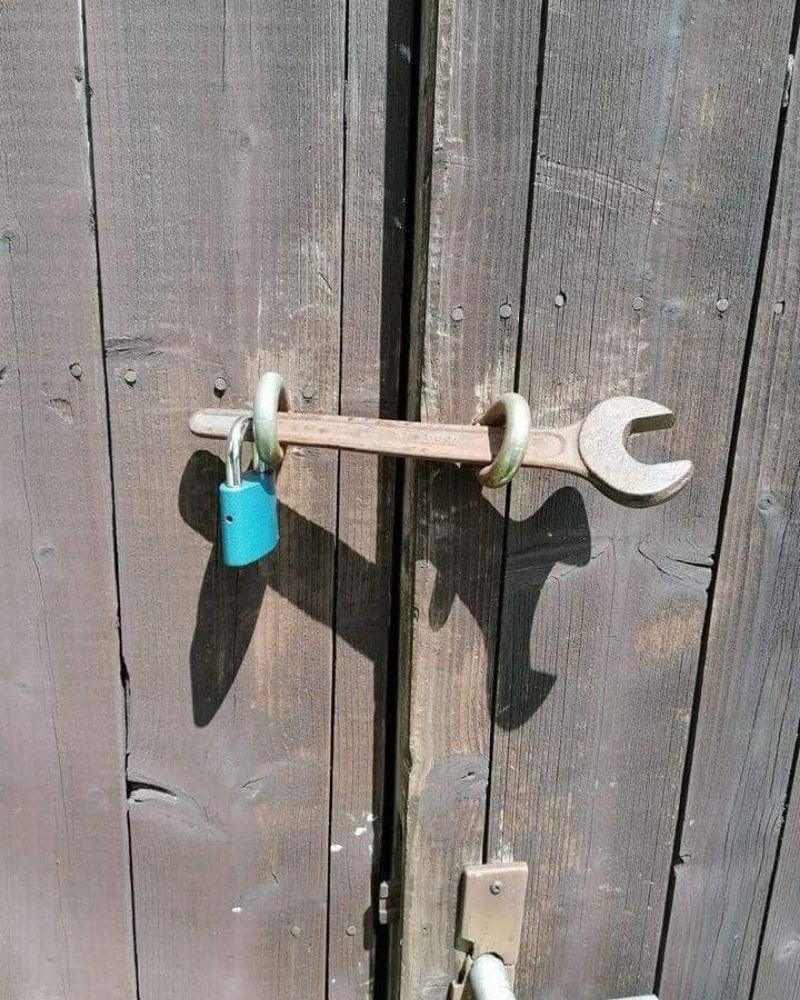 This ingenious method of keeping the doors shut has worked at keeping intruders, man or beast, out. However, if a bear comes around, they’ll more than likely bash the wooden doors in to gain access to whatever is hidden in that magic shed.

#2 Using a Wii to weigh yourself

Technology has reached a point where traditional household appliances have become obsolete. For example, the Nintendo Wii doubles as both an entertainment system and a body weight scale. The Wii comes with a balance board that you the player can stand on. You use the board when playing Wii Fit, a game designed to help monitor the player’s weight. 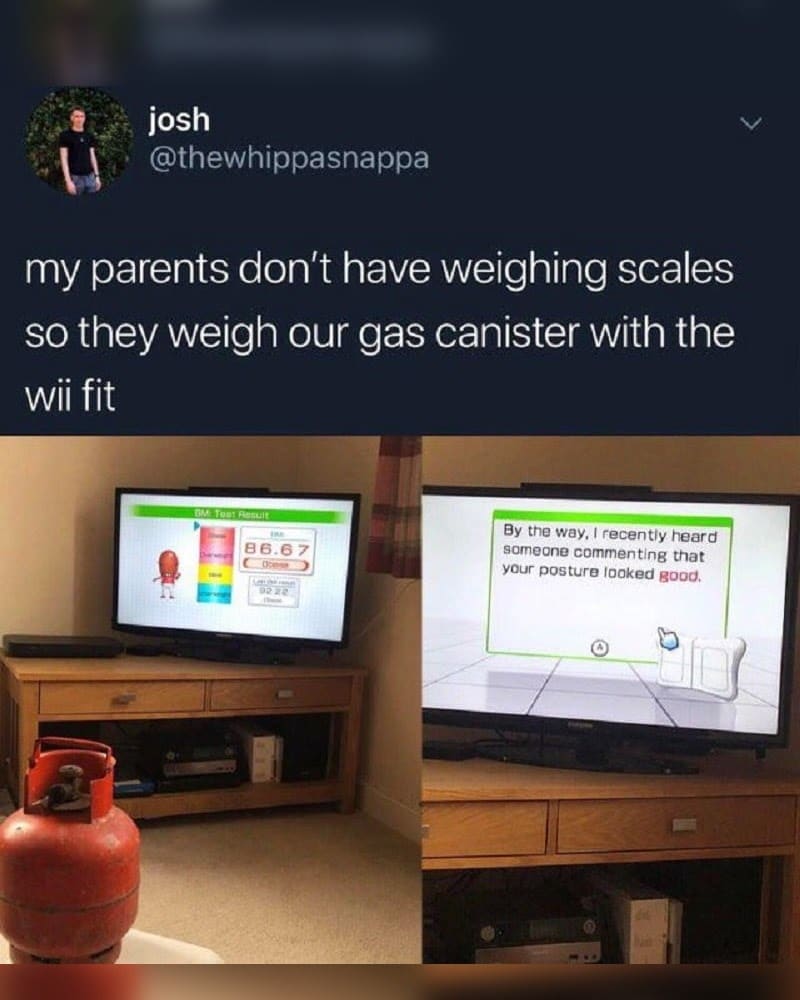 What this family decided to do was place a propane tank on top of the board to see how much gas was left. To the parents out there, if your kid asks for a PlayStation 5 or an Xbox Series X this Christmas, don’t shoot them down. You never know what these game consoles can do for you!

#3 No more passing through the fence

There’s no way that pet owners can keep an eye on their adorable pooches or felines 24/7. After being cooped up at home all day, they need a bit of fresh air, and what better way than to let them out onto your front or back yard to stretch their legs? That is, unless their bodies can slide through your property’s gate, then you’ve got a pretty big problem on your hands. 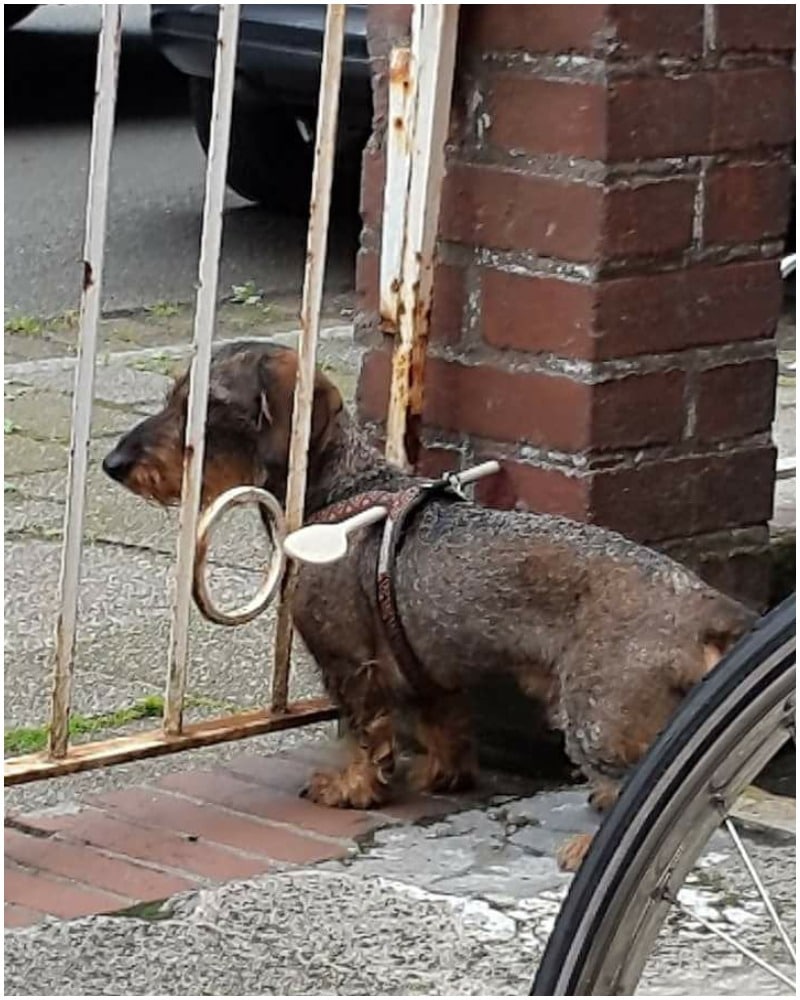 But creativity knows no limit. What this family did was attach a wooden spoon onto a harness. The spoon would crash into the gate, preventing the pupper from breaking free. Now that’s engineering at its finest! 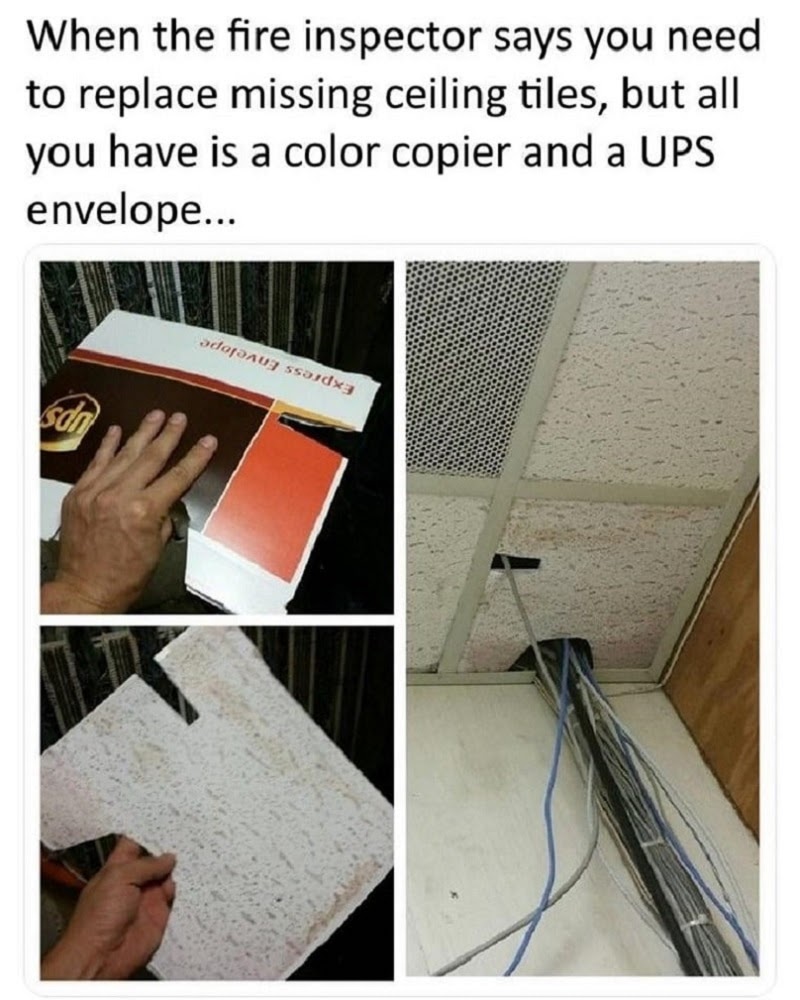 But if you don’t have the time or energy, or if you can’t find the right kind of tile, what you can do is take one of your existing tiles down, Xerox it, and use the copy to cover the open gap. Simple, cheap, and ingenious.

This family created an entirely new definition of what hanging lights are. Perhaps after a ceiling fan or chandelier came crashing down, the homeowners didn’t know what to do with the exposed wires and missing lights. However, they didn’t let anything stop them from reaching their full-engineering potential. 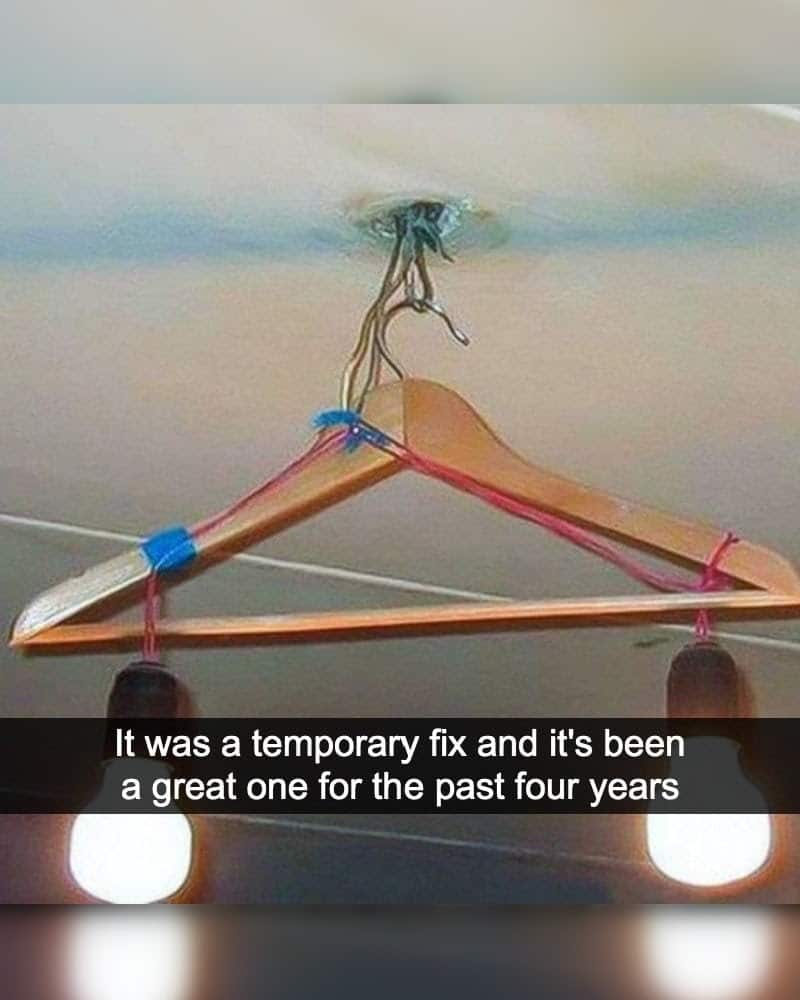 Instead, they put a hanger on a hook, pulled the wires down, and connected two lightbulbs to their makeshift chandelier. Nothing screams class more than a cheap, dangerous way of illuminating a room. This temporary fix supposedly lasted for several years, and you know what they say: if it ain’t broke, don’t fix it.

One of the most frustrating things for a gamer, besides lag, latency, packet loss, slow internet connections, and high ping, is controller drift. Controller drift is when your on-screen character moves without input from the joysticks. It happens to older controllers or new ones thrown repeatedly against a wall in anger due to lag 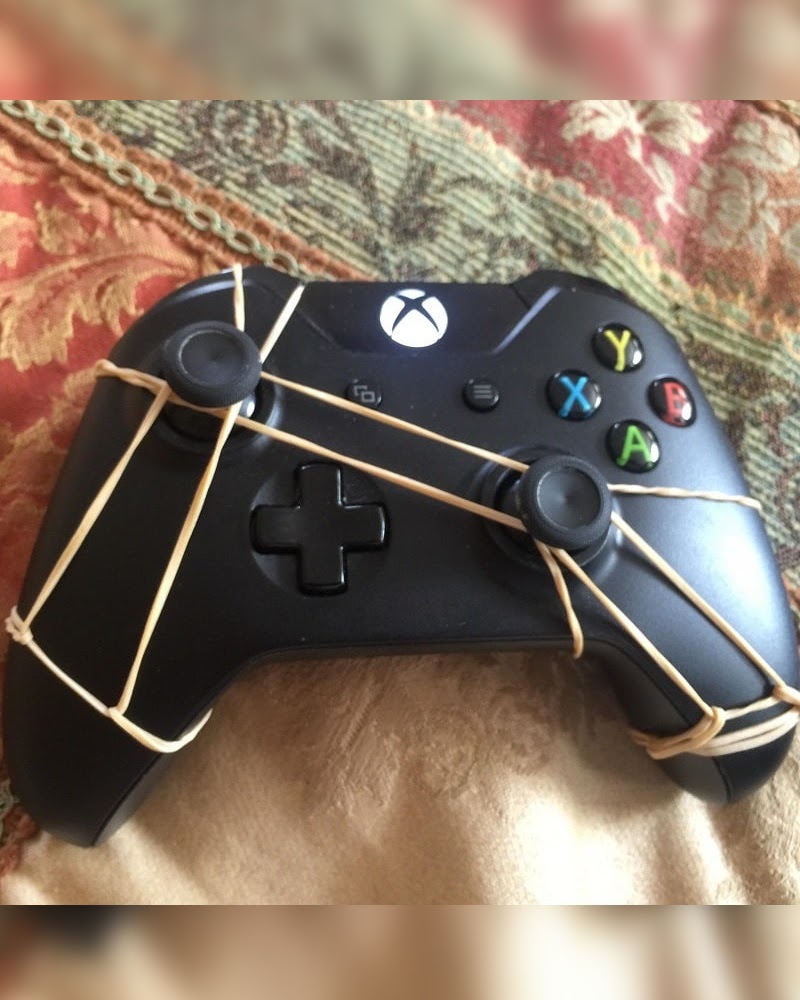 But this gamer didn’t let the laws of a broken controller ruin his gaming experience. What he did instead was take a bunch of rubber bands to keep the joysticks in place. We’re not sure how effective this method is at reducing drift, but if he took the time to share it online, then it must be working.

#7 No more misplacing the remote

Remote controls were designed to be misplaced. That’s why they’re so frustratingly tiny. However, with a bit of spare lumber, some plastic, and an engineering mindset, you, too, can do what this person did and increase the size of your remote control by several feet. 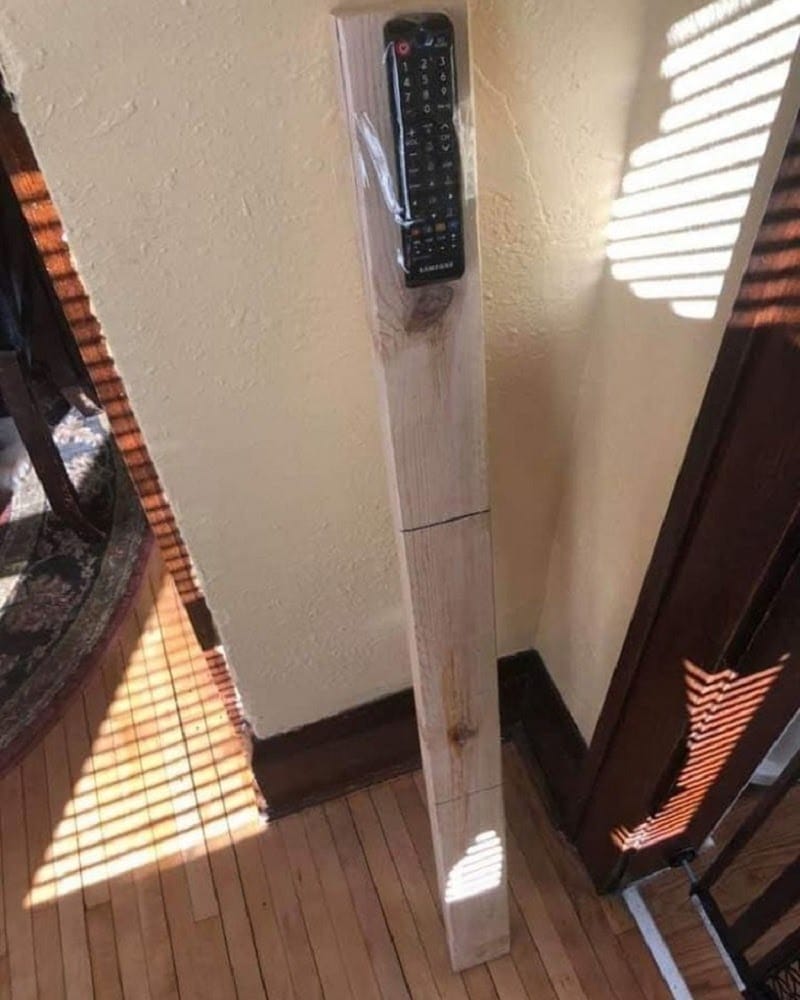 Now, we have to ask ourselves: does this makeshift remote control work? You bet it does, there’s absolutely no risk of misplacing the remote. Is it convenient? Probably not, but that’s not what this wooden board was designed to do. So, at the end of the day, we call this the perfect solution. And it’s easy to do on your own!

Most of us have probably slept through a beeping alarm. It’s understandable, seeing as how we spend our nights doing nothing of importance until the wee hours of the morning. However, if you absolutely need to wake up on time (perhaps you have to go to work), what you can do is modify your alarm clock to wake you up in a more effective manner. 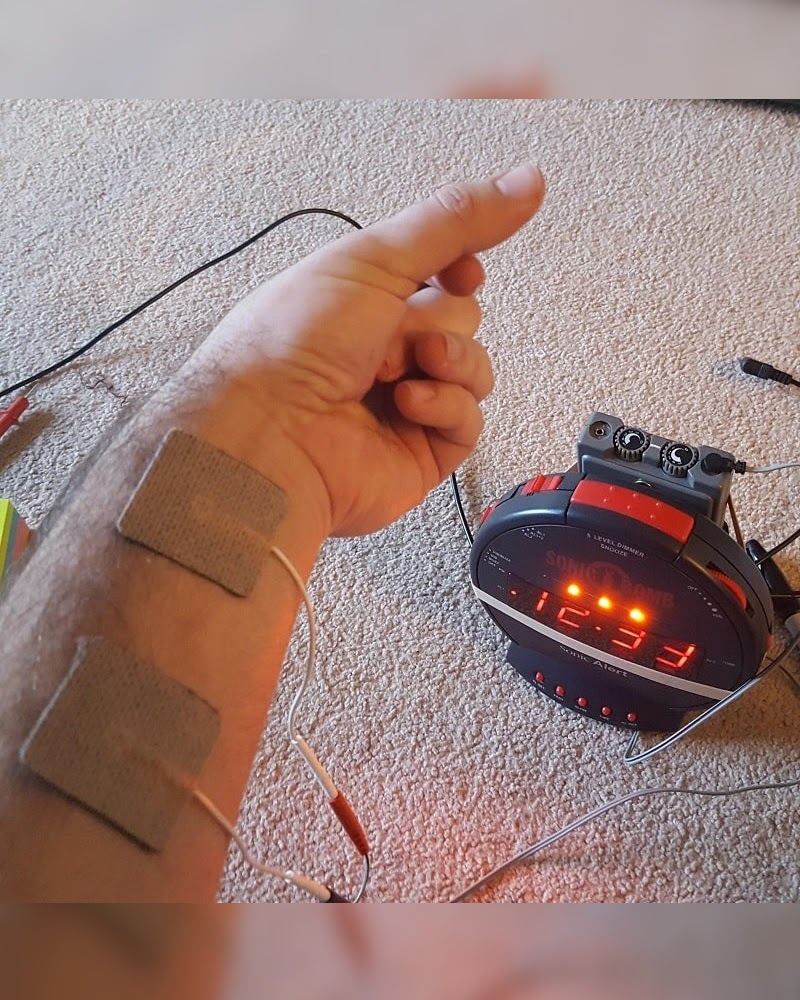 What this person did was take wires from the alarm clock and connect them to his arm. When his alarm goes off, it shocks him, effectively jolting him awake every morning. We wouldn’t recommend this to anyone, but if it works, you might want to give it a try.

For the truck owners out there who struggle to climb aboard, this person came up with a creative solution. They welded a pipe wrench onto their vehicle as a step-ladder, so every time they want to climb aboard or dismount, they don’t have to jump or fall several feet. Finding a solution to your unique set of problems is what engineering is all about. 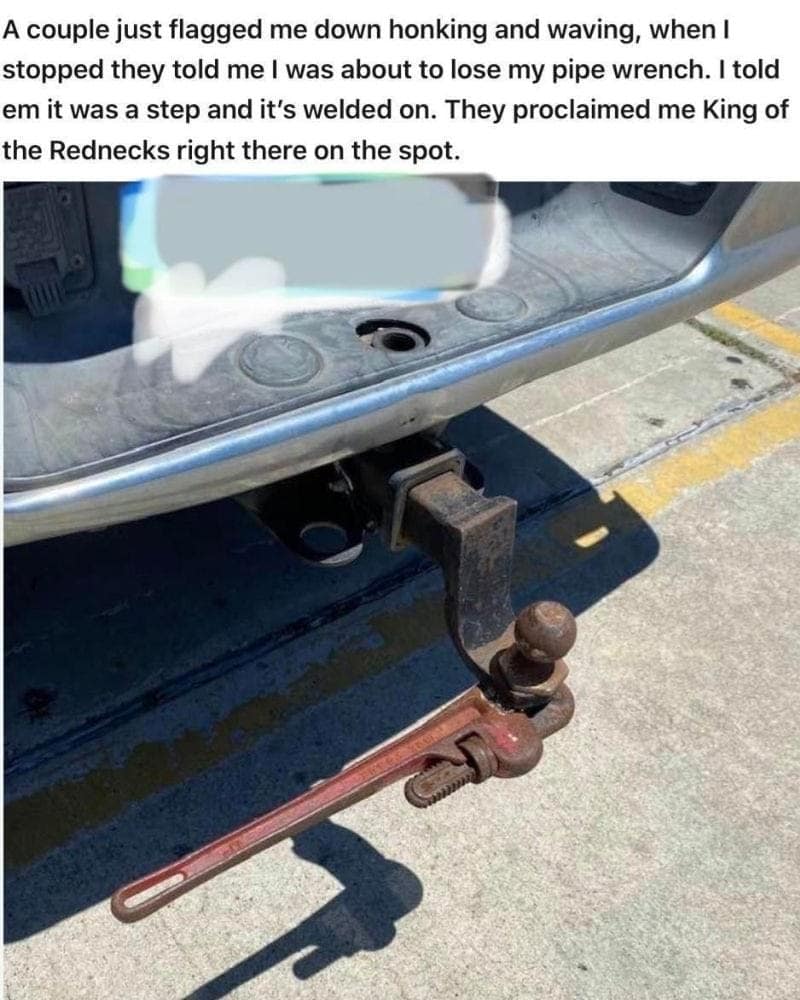 The only problem is that for those who don’t know what you’re doing, your car may look like the wackiest vehicle on the road. This is what happened to this car owner, but instead of being called crazy, they were immediately dubbed the King of Rednecks. All hail the King!

This isn’t a new idea, but it’s one that many people should look into. If your showerhead is clogged with calcified buildup and you don’t have any vinegar on hand, what you can do is remove the showerhead entirely and replace it with a soft drink bottle with holes punched into it. As water gushes from the pipes, they exit through the makeshift shower head, and water pours into tiny, low-pressure streams to rid your body of filth. 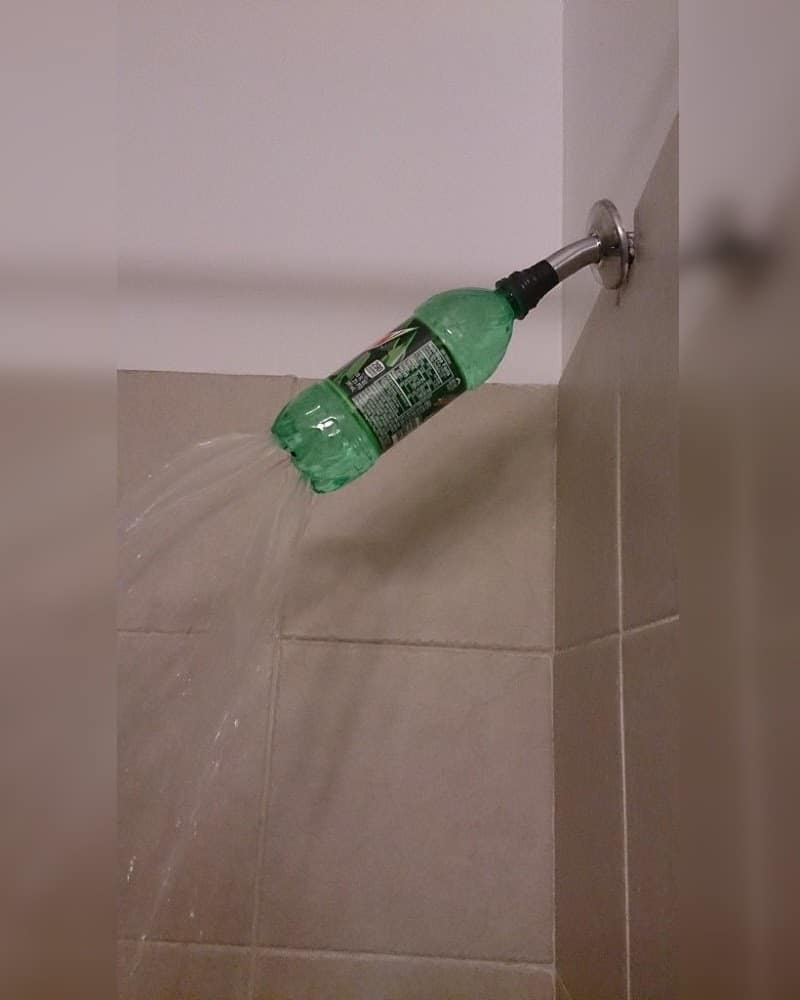 It’s a lot easier to descale a showerhead with a cleaning agent or your own DIY vinegar mixture, but why go the easy route when you can use your limitless creativity and create your own solution?

Thanksgiving Is Surely A Hilarious And Awkward Holiday For These People

Leaving After 7 Hours Waiting In ER, Woman Billed $700 For A Never-Happened Health Check

14 Words That Meant Something Completely Different In The ’00s

Geminis Never Cease To Amaze People Around Them, Let’s See What They Did!

“Men, DO THIS”: Bartender Warns Woman About A Suspicious Guy, Inspires Others To Share Similar Stories

16 Funny Leo Memes That Prove “Messing With Leo Is Like Playing With Fire”, Watch Out!

30 Photoshop Fails by the People of Cringeville

Weird And Hilarious Things That Were Probably Designed For Aliens

What Is It Like To Have An Aries Girlfriend? Describing In 15 Amazing Memes