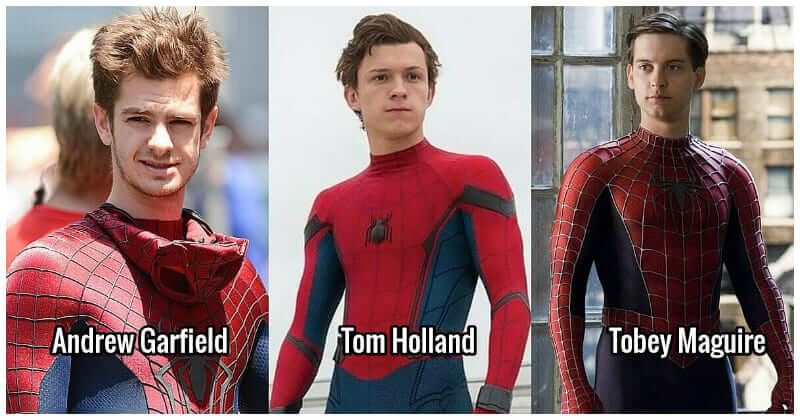 In the era of superheroes, spider-man is one of the most favorite characters. Hence, portraying this teenage superhero is constantly a challenge for filmmakers. They have all attempt to deliver the true essence of this character from comics: a funny young shy teenage boy who has a good heart. Spiderman’s journey is not just about defeating the villain and saving innocence, it’s also about how he grows up as a person, how he learns the big lessons in life. Because as Uncle Ben said “great power comes with great responsibility”, after all, he was just a confused teenage boy. Many directors have thought and tried to portray this character and up until now, we have the most popular 3 versions of spider man played by Tobey Maguire, Andrew Garfield, and Tom Holland. They were all amazing, and fans loves them. But you might wonder, what are the main differences between Tom Holland and the other 2? Well let’s find out, shall we? Unlike Tobey who is a shy introvert or Andrew who’s a confident extrovert, Tom’s Spiderman is a true nerd, a naïve teenager who just wants to do good deeds but is also a little bit clumsy. While Tobey often remains silent, Andrew is charming and makes hilarious jokes, Tom talks a lot, he shares literally everything on his mind. Tom’s spiderman uses a web shooter just like Andrew’s version. Tobey on the other hand shoots web straight from his wrist – “organic-style”. Spiderman in Tobey and Andrew were fairly lonely on their ways to grow up and learning life lessons. There were many times we see them considering and thinking alone about their problems. Tom on the other hand, always has someone around him, he doesn’t hold back, he shares his issues with friends, family, and other superheroes. Tobey had 3 suits: the first handmade, the official one, and the Venom-infected black suit. Andrew has 2: the handmade, and the combat suit with the insulated upgrade. Tom, on the other hand, has 6 suits: handmade suits, Homecoming suit, Black-White Suit with Stark Technology, Nanotech Iron-Spider, Black Stealth Suit from Nick Fury, and Tech fused with magic suit in No Way Home. Tom’s spider man exists in MCU – the franchise where it is filled with superheroes from every corner of the universe. There is always another hero filling Spiderman’s role as the savior when he’s confused and taking his time to learn. Tobey and Andrew didn’t have that, they had to fight alone throughout most of their journey with minimum help. They have to take the role of sole hero. Tobey had to witness his Uncle Ben die because of his irresponsibility, Andrew couldn’t save his Uncle Ben and Gwen Stacy. These 2 Spiderman’s lessons are attached to the loss of their loved one. However, Tom’s Spiderman didn’t lose anyone, instead, he learns his lessons through the villains and how they tell their stories about the cruel world that he’s living in.