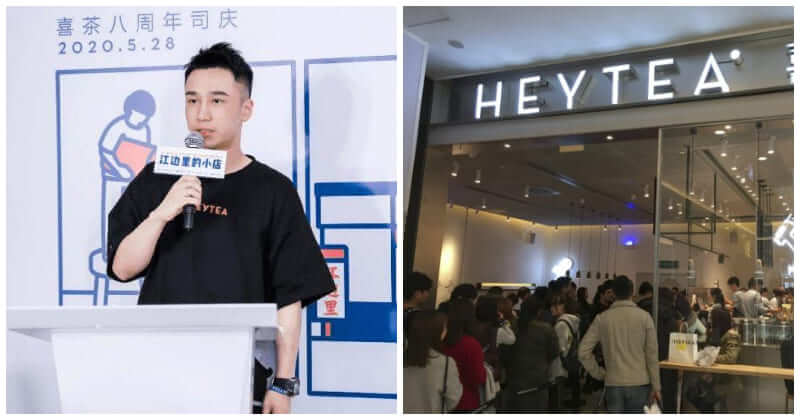 “Everyone has the opportunity to succeed. It is important that you know how to seize opportunities, dare to think, do, and face challenges and strive to be successful,” this young entrepreneur concluded. From mobiles stores to founding HEYTEA Nie Yunchen was born in 1991 in Jiangxi, then moved to Guangdong with his parents.

In fact, at the beginning, he opened a mobile phones shop after graduation, rather than producing milk tea. At that time Nie was just 19.

The reason that urged Nie to enter the business was at that time, Steve Jobs had just introduced Apple to China. This immediately caused the entire mobile phone industry to burst with hope, and Nie Yunchen also opened his own store accordingly. His business was quite favorable, earning him a lot of profit.

However, after a while, online shopping became increasingly popular, causing Nie’s store to suffer heavy losses and it was forced to close. At that time, milk tea business was getting increasingly popular. With low capital and very high returns, opening a milk tea shop is not too difficult for entrepreneurs.

In May 2012, Nie sold all his assets to open a milk tea shop named “Huang Cha”. His principles included: ‘real price – real product’, determining in phasing out any harmful ingredients and serve customers with the best tea. In the beginning, Nie Yunchen’s store was always empty, even daily revenue could not cover the expenses. Nie realizes that product quality and cost are the top principles and the only way to keep customers is to continuously improve the product.

He started doing research, trying and adjusting no less than 20 different drinks every day, strictly controlling the weight of the ingredients because different ratios will lead to different flavors.

Finally, all of Nie Yunchen’s efforts were paid off, and HEYTEA was officially launched onto the market. 2016 can be considered the most meaningful year since he started his career. That year, he re-registered the trademark, changing the name from “Huang Cha” to “HEYTEA”. After changing his name, he immediately received an investment of nearly $15.4 million from International Data Group.

Since the establishment of HEYTEA, in order to ensure that the quality of HEYTEA is not affected, he has only opened chain stores instead of franchising, with each store having its unique characteristics.

Persevere to the end As of August 2021, HEYTEA has had more than 500 stores in 49 cities around the world, and each store in the country has an average monthly revenue of more than $150,000. In a highly competitive market environment, HEYTEA is still consolidating its position. According to published figures, in 2019, HEYTEA launched a total of more than 240 new products including bread, ice cream, coffee and others products, besides seasonal drinks.

In the latest strategic investment, HEYTEA is valued at more than 56.3 trillion VND. In just one year, the value of HEYTEA has increased by 80%.

The young Nie Yunchen proved that keep making effort and you will definitely succeed. His success is attributed to his tireless tea trials, his dedication and his enthusiasm. HEYTEA reaching its current position is completely worth Nie’s effort.

Mom Went Mad With Sister For Not Using Baby Talk With Her 3-Year-Old Kid, And Here’s How People Replied

Explore The Reasons Of Cancer’s Sadness Through These Moments

Each Zodiac Sign Has Rules Around Them, And They Are Funny Sometimes