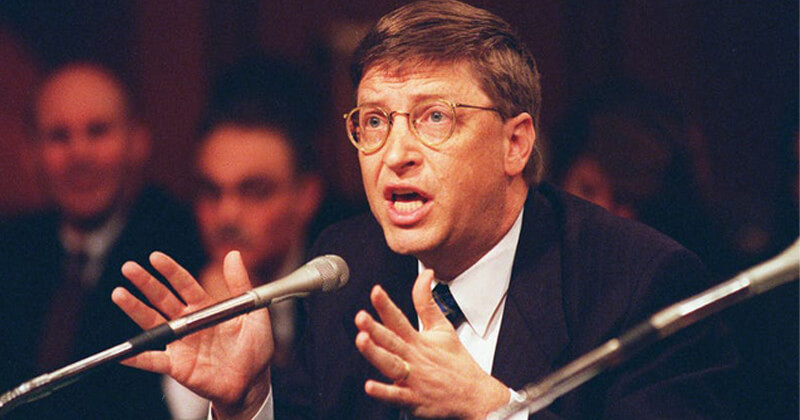 In the late 20th century, one of the most troublesome antitrust lawsuits in history broke out, in which the technology giant Microsoft, under the leadership of CEO Bill Gates, was said to have used an unfair strategy to dominate the web browser market. Antitrust laws apply to virtually all industries and to every level of business. Governments design them in order to make sure there’s fair competition in the market. In simpler terms, antitrust laws prevent companies from making and boosting their profits by playing dirty.

At the end of the 20th century, one of the most “dramatic” antitrust lawsuits in history occurred, with the focus being the giant, Bill Gates’ Microsoft. To this day, many people still believe that this scandal has shown the public a different side of Bill Gates and Microsoft: a greedy businessman, a business that likes to play dirty.

The source of the incident

In the last years of the 20th century, under the direction of founder and CEO Bill Gates, Microsoft was said to have expanded to almost all areas of the computer industry such as applications, operating systems, peripherals…

Gradually, Microsoft’s growing presence in the personal computer market raised an alarm with federal officials. The Federal Trade Commission (FTC) conducted an investigation in the early 1990s to determine whether the giant was trying to create a monopoly. Then-Microsoft CEO Bill Gates during a hearing in 1998.

However, then there was one area that Bill Gates could not dominate: the World Wide Web, or the internet. Netscape, a relatively young competitor to Microsoft, was one step ahead when it successfully introduced the Netscape Navigator browser. Since its launch in 1994, Netscape has captured more than 70% of the global browser market in less than a year.

It can be seen that Microsoft has used its monopoly in the operating system market to bring down competitors. On May 18, 1998, the US Department of Justice and the chief justices of 20 different states filed a lawsuit accusing Microsoft of monopolizing and destroying businesses in the same industry.

Commenting on the lawsuit, Chief Justice Thomas Penfield Jackson, who presided over the trial, said: “In the US, no person or corporation is allowed to be above the law.”

“Microsoft’s moves demonstrate that this corporation’s business strategy is to use its monopoly to force other companies to abandon projects that may threaten Microsoft and punish companies that do not,” he said. Jackson emphasized.

More than two months since October 19, 1998, Judge Jackson has turned over the documents of the case. Microsoft’s deep fear of Netscape was evident in an email titled “Internet Tidal Wave” sent by Bill Gates to his subordinates in May 1995, about six months after the competitor launched it.

As a result, the tech giant refused to disclose important technical information to Netscape, even though the fledgling company had asked for help. That forced Netscape to postpone the announcement of a browser compatible with Windows 95 and clashed with IE’s launch schedule, according to the Guardian.

After that, Microsoft has fully exploited many ways to increase market share above the divine 50% mark. Finally, to “steal” a piece of Netscape’s cake, Microsoft decided to give away IE to customers using the Windows operating system. At its peak in 2002, IE dominated 95% of the browser market.

Also during the investigation, Judge Jackson also learned of many other victims of Microsoft, such as International Business Machines (IBM), American Online, Intel, Apple Computers… Most of them are said to have followed instructions by Bill Gates. Sharing with the judge, senior employees of the above corporations said that Microsoft also uses a similar strategy to Netscape: threatens, and at the same time withdraws important technical information if they do not abide by Microsoft’s offer.

Seemingly a win for the weak

Alleging that Microsoft had hindered competition in the market, Judge Thomas Penfield Jackson ruled against the tech giant, tarnishing the reputation of a corporation once believed to be the one pushing internet economy.

Specifically, the judge concluded, Microsoft violated parts of the Sherman Antitrust Act, which was established in 1890 to outlaw monopolies and cartels. He found that Microsoft’s position in the marketplace constituted a monopoly that threatened not only the competition but also innovation in the industry.

On June 7 2001, Jackson also called for Microsoft to divide the company in half and create two separate entities that would be called baby bills. The operating system would make up one half of the company and the software arm would make up the other.

It seemed that after much effort, the weaker companies that had been under pressure from Bill Gates’ “baby” had received sweet results, however Microsoft decided to appeal and turn the situation around. In September 2001, the US Department of Justice announced that Microsoft no longer needed to split, rejecting Judge Jackson’s ruling. Then, on November 2 of the same year, the two sides made concessions and came to a common agreement. In the end, Microsoft only had to agree to share the application programming interface with other companies.

After all, the verdict turned out to be a laughingstock for the United States when Microsoft was still a major corporation, dominating products like the Windows operating system, and Bill Gates – even though he had retired from his position of running Microsoft in recent years, is still among the richest people in the world.

Meanwhile, Netscape was ultimately unable to compete with IE and was forced to merge into American Online Corporation for $4.2 billion in November 1998.