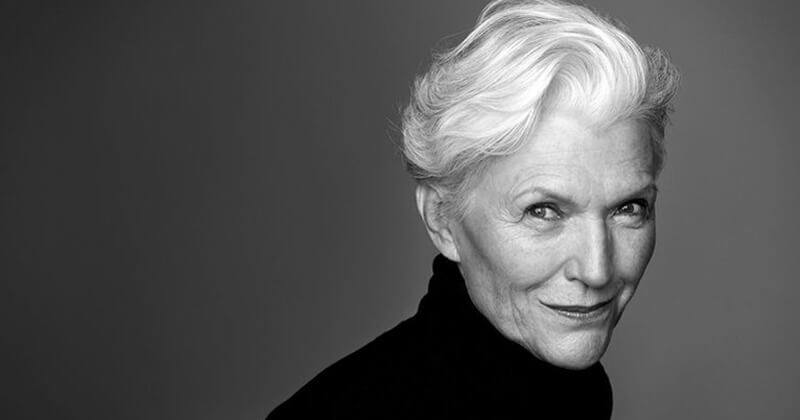 The extremely stylish “superhero” mom is behind the success of billionaire genius Elon Musk. At the age of 73, Mrs. Maye Musk is still full of energy and youthfulness despite her hair having turned grey. The world’s richest billionaire Elon Musk is always makes us curious about his life and the people next to him. The mother of the founder of SpaceX – Maye Musk is certainly part of that because to raise a successful child, she herself must be a scientific person. Mrs. Maye Musk surprised us when she was 73 years old, but her figure and spirit were still very young.

To achieve that, Mrs. Maye Musk has adopted a strict diet with a different way of consuming food than many others.

Maye Musk, born in 1948, is of Canadian descent but immigrated to South Africa with her parents on a private jet. According to the New York Times, in 1952, when she was only 4 years old, she already flew 22,000 miles around the world with her parents. Growing up, Maye and her family roamed the Kalahari Desert in search of the “Lost City”. It was also through these adventurous parents that she found her confidence to pursue a career in the fashion world. Maye and her early model photos.

She was predestined with a modeling career at the age of 15. Even, Maye Musk attended Miss South Africa and reached the final round, although she did not achieve the highest position, her images also gained many recognitions from modelling agencies. Her modeling career was on the rise, but suddenly at the age of 21, she left the spotlight and married Errol Musk, an engineer. The two had three beautiful children together. Her marriage to Mr. Errol Musk did not last long, after nearly 10 years of marriage, Maye and Errol divorced in 1979. At the age of 31, Maye Musk became a single mother raising 3 young children. After the divorce, she did not have a dime in her pocket even though Errol Musk’s family was wealthy. Maye Musk with her three children in 1976 in Pretoria, South Africa.

In 1989, Maye Musk brought her family from South Africa to Toronto. This was also the most difficult time in Maye’s life. There was a time when she had to work 5 jobs at the same time to earn money to raise her children: from working part-time at a grocery store and laundromat, as a research officer for the University of Toronto, teaching at a nutrition school, to working as a model. Maye once told the Huffington Post: “After my divorce, I had to house and feed three kids without maintenance. Poverty makes you work really hard”
Perhaps for each member of the Musk family, no one can forget that dark time. When Maye was 41 years old, modeling was no longer a “hot” profession, she had to work hard to pay rent and school fees for her children in many different ways. During this time, her family did not even have money to buy meat for dinner. Kimbal, Tosca, and Elon Musk pose with their mother, Maye, before school in a childhood photo.

At that time, a customer of Maye, the owner of a cattle slaughterhouse, sympathized with her situation and decided to provide her family with a huge chunk of meat each month. Mrs. Maye will cut the meat into 4 pieces to eat in 4 weeks.

Not to mention, Maye is too busy with work that she can’t go on a date or meet another man. “If we split the bill, I know my kids might go without food that week,” she said.

Meanwhile, her children also do their part to support the family. Tosca worked at a high-end grocery store while in school, and Maye Musk helped Elon get a job at Microsoft.
Maye studied nutrition at the University of Pretoria in South Africa and went on to be awarded two master’s degrees in the field, one from Orange State University, South Africa and the other from the University of Toronto, Canada. As a nutritionist, Maye Musk always stocked up on healthy foods like milk and bread. However, because she did not have much time to cook, Kimbal became the main chef in the family.

With extraordinary efforts, Maye Musk’s family finally got through the most difficult time. She led her family to success: An empire named Elon Musk, Kimbal Musk – an owner of the famous  restaurant chain, and Tosca Musk – a television producer with many prestigious awards. Maye and her billionaire children.

Mrs. Maye Musk’s Instagram has nearly half a million followers and as everyone knows, she has a glamorous cover face, even at the age of 70. Her path to stardom began in 1969 when she entered Miss South Africa. She continued to model for many years after that, and in 2017, at the age of 69, she became a Cover Girl ambassador and the oldest person to represent the beauty company.

Sharing with Vogue, Mrs. Maye Musk shared that doing that gives hope to women, that when they get older, they can still do what’s right for themselves. Maye continues to model on demand for couture campaigns and photo shoots for magazines like Time and Vogue. It’s hard to believe that a woman in her 70s has such a face and body.

Besides her ‘Flexitarian’ diet, Maye Musk also studied and showed that there are two other diets that also respond well to the human body: the Mediterranean diet and the DASH diet. But the most important thing is to maintain an optimistic spirit and keep practicing.

At 73, Maye Musk has never planned to slow down or retire. She once told The New York Times that she would work until no one else could hire her. She can find another job but will still keep her role as a nutritionist because she loves it so much.

30+ Best Question Game Ideas For Friends At A Gathering

Reactions Of Aquarius When They Meet Their Soulmate, Describing in 15 Memes

Capture 15 Funny Moments Of A Leo During Quarantine

Sum Up Mom’s Life In 25 Comics, Created By French Artist

How You Start Your Day Based On Your Zodiac Signs, Shown In 15 Amazing Memes