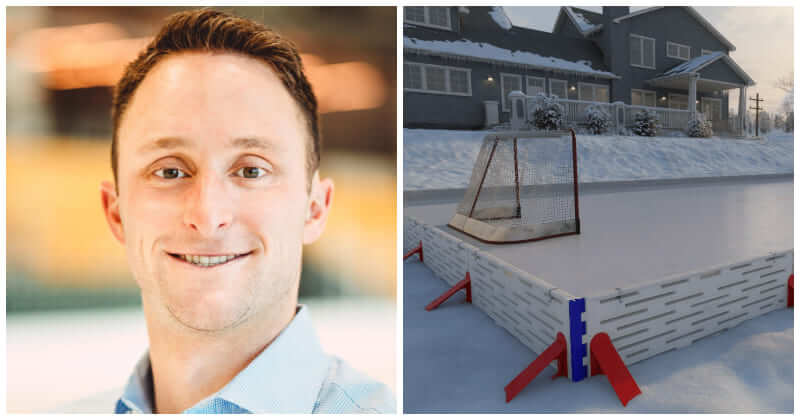 Despite the pandemic, the young entrepreneur still made millions of dollars with simple things like plywood, stakes, and power tools.

Regardless of the challenges posed by COVID-19 for many business owners, 25-year-old founder Dylan Gastel of EZ ICE still managed to hit a peak in sales last year. Every weekend, Gastel and a friend drive to a customer’s house to build a skating rink. He then attended Yale University and used his engineer’s degree to create the prototype of today’s EZ ICE rinks.

“Winter came fast, and the calls started flooding in. Families were desperate for ways to keep their kids active and able to practice hockey skills despite many states closing schools and indoor ice rinks for extended periods of time.” In his sophomore year, Gastel created a system that made building backyard ice rinks easier across the US and Canada. EZ ICE officially launched on Thanksgiving Day in 2016, after his graduation. In the first 19 days, he sold out $120,000 of materials, equivalent to 52 rinks.

At that time, he was the company’s only employee, in charge of engineering, supply chain, customer service, freight logistics, and overtime warehouse laborer.

As demand continued to grow in 2017, Gastel hired a full-time operations director to work in the Boston sales office so he could focus on completing his engineering degree.

In 2018, Gastel hired another employee and opened two new warehouses. Together with growth, he faced more problems such as reducing transportation costs, delivery times and environmental impact.

Gastel and his colleagues analyzed customer locations, researched shipping routes and rates to locate warehouses where they could optimally serve customers across the US and Canada. In addition, they also improve production capacity, investing more to produce many parts of the rink at the same time. In terms of marketing strategy, Gastel focuses on promoting to customers about the ease of building EZ ICE compared to the old style skating rink. “It is such a shame when people call us saying how much they regret buying another system, or how they wish EZ ICE had been around when they purchased another rink years ago,” Gastel said.

The young businessman said that although the business is favorable, it does not bring high profits. Even so, he stuck with it and continued to come up with many improvements to innovate the construction process. Thanks to perseverance and efforts over the years, Gastel’s company has grown stronger and more widely known.

Gastel’s advice to other young entrepreneurs is to choose a product that future customers desperately want you to create to help them solve an urgent need.

“Ask strangers. Ask anyone that you can. If you cannot find a lot of people who say, ‘Wow, I would buy that in a heartbeat if it existed!’ then you should probably find a different product to invent,” Gastel shared. 12 Funny Memes That Will Explain Why Sagittarius Are “Free Spirits”

Taurus And Beds Are Soulmates, Proving Through 20 Hilarious Memes

Disclose Your Scorpio Biggest Fear That Not Many People Know

18 Hilarious Taurus Memes That Basically Sum Up Their Life

Shelter Dog Hugs News Reporter Until He Decides To Adopt Her

These Are The Moments You See The Cute Vibe Of Aries

15 Hilarious And Lovely Memes That Show How Inner Capricorn Is

Can’t Stop Laughing At Flirting Style Of The Zodiac Signs, Showing In 15 Memes