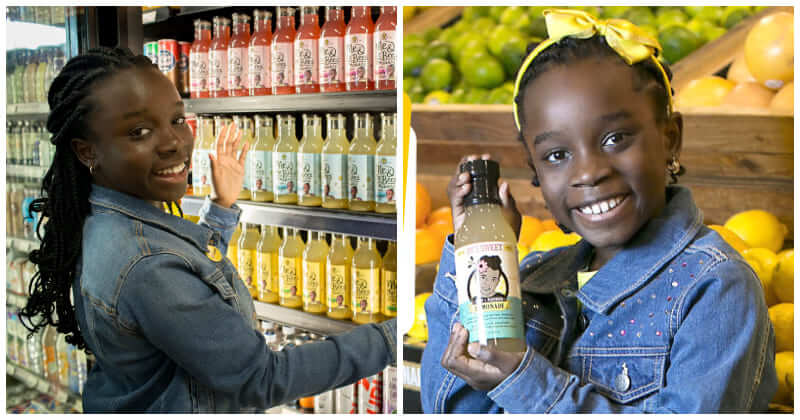 The 17-year-old African-American has a passion for business and owns a famous beverage brand throughout the U.S. Behind the success and independence of the “teen” CEO are difficulties and valuable lessons on developing a business. Mikaila Ulmer is the 17-year-old CEO of Me & The Bees Lemonade, headquartered in Austin, Texas. Her products are currently sold in more than 500 stores across the US.

With 360,000 lemonade bottles on the market each year, and the products presented on the Whole Foods Market supermarket chain, Mikaila is considered one of U.S. youngest businesspeople.

A difficult beginning for a 9-year-old girl Mikaila started selling her lemonade in 2009 with assistance from her parents. The shop then simply consisted of a small table displaying homemade lemonade bottles. What is special is that they are made on the 1940s recipe from Mikaila’s grandmother.

The recipe included honey, and around that time, Mikaila was repeatedly stung by bees for two weeks to get the ingredient. Her parents advised her to do some researches to better understand bees such as pollination and their ecology.

Since then, Mikaila has donated 10% of the profits to organizations that help to preserve honey bees.

The difficulty began when the girl needed to answer her parents’ question: “Who will be in actual charge of this business?”.

Makaila had to start with designing the logo, finding a factory, and distributing the products. “I can’t do these things alone, I don’t know where to start,” she said.

Furthermore, she also has difficulty in studying at school. The 13-year-old CEO shared: “’It’s not easy when you have to do many things at the same time. There are times when I had  to be absent from school to attend an interview or TV show, and vice versa, I missed a broadcast because of an exam.”

Independent thinking and knowing how to listen In fact, both her parents have business degrees and backgrounds in marketing and are eager to help her out.

She said: “All of my family members act as co-founders and have the right to make decisions in business activities.”

“Also, I’m young… I know I don’t know everything, so I always listen to advice and opinions from my parents, I think teamworking will help us reduce difficulties and find the right path for our company.”

Breakthroughs at a young age The breakthrough came in 2015, when Mikaila won a contract to supply Whole Foods Market stores at the age of 9.

A Whole Foods Market representative said: “Mikaila and her company have drawn our attention to the business strategy and reputation of the products that she and her parents bring. She has a unique product that tastes great, and is a passionate, strong-willed founder who understands the significance of pollinators.”

In 2015, Mikaila became known to television viewers across the U.S., because she bravely registered for the American business reality show Shark Tank on ABC with a presentation to raise capital for the company Me & The Bees Lemonade. Then, she succeeded with a $60,000 investment from Mr. Daymond John, the owner of the FUBU apparel company. In 2017, a consortium of former American football players offered to invest $800,000.

The clear and ambitious goal of the 17-year-old CEO Mikaila continues to win numerous awards for young African-American entrepreneurs, and she once had the opportunity to chat intimately with former U.S. President Barack Obama. Obama praised the young CEO and introduced her to the International Women Entrepreneurs Summit organized by the United Nations. Speaking at the conference, the girl shared: “I have a lot of plans, but like my father always said, let’s go step by step and complete the small goals.”

Mr. Geoffrey Soares, owner of Summit Beverage and the supplier of canned bottles to Me & The Bees Lemonade, thinks Mikaila is a great brand ambassador. “Your products may be good, but without an interesting story, your brand will not be known to the public,” he said. That’s true in this competitive industry. Mikaila is a girl with great passion and responsibility and their family has done a good job of managing and developing this lemonnade business.”

Although she is passionate about business and has a lot of business ideas, she still thinks studying at school is the immediate task that she needs to spend a lot of time focusing on.

Me & The Bees Lemonade’s young CEO isn’t afraid to reveal her 2018 goal: diversifying her honey lemonade product and bringing it to the international market through website orders. In addition, Mikala will publish a book about her own experience in a startup.

Talking about startup, the 17-year-old CEO confided: ”It’s never too soon to dream of starting a business. I started selling my first lemonade bottles at the age of 4 to help support the family. It’s also business. The ideas will grow from there.”

25 Anchors, Zodiac Signs, And Other Trendy Tattoo Designs Everyone Will Want In 10 Years

Impulsive But Super Cool Moments Of Aries That Crack You Up

20 Touching And Heartwarming Photos That Radiate Love And Kindness

Can’t Stop Laughing At Flirting Style Of The Zodiac Signs, Showing In 15 Memes

15 Funny Secrets That Help You Read Your Libra Girlfriend

Meet Tim Ballard, A Loving Father Of Nine And A Former Homeland Security Agent Who Has Saved Over 1,600 Children From Sex Slavery

This 74-Year-Old Woman Has A Toned Body Like A Model, And You’ll Be Amazed At Her Tips