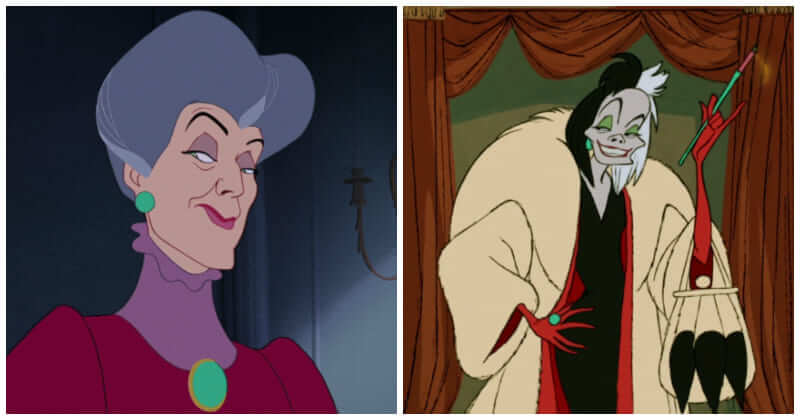 Everyone loves a Disney villain! It’s difficult to admit, but I’m sure there’s a spot in everyone’s heart for their favorite villain. This is nothing to be ashamed of because everyone has a dark side, which allows us to empathize with the movie’s antagonists.

Do you like the character Ursula in The Little Mermaid because she is so amusing? Or do you secretly admire Jafar because he somehow reminds you of yourself? Many individuals love Mother Gothel in Tangled because they believe there’s nothing wrong to wish to stay young forever!

Believe it or not, your favorite villain can reveal a lot about you! There’s got to be a reason you love that character, right? Here are a few things about yourself that can be revealed from your favorite Disney villain, let’s check it out!

#1 Yzma from The Emperor’s New Groove You’re a little power-hungry, like Yzma. When it comes to the majority of things, you enjoy being in command. Even while it’s nice to be powerful, there are times when it’s best to take a back seat and let others steer. Who knows, if you can learn to let go and relax, you might even appreciate having someone else take the lead. Because you can completely understand Mother Gothel’s wish to remain eternally young, she is your villain of choice. You value being young, carefree, and adventurous above all else. Don’t be afraid of growing old, even if youth is a beautiful and great thing. Allow life to take you where it wants to! If Captain Hook is your favorite villain, it’s probably because you share a common trait: sloth. Despite the fact that you are motivated and know what you want, you occasionally rely on others to help you accomplish. Don’t do it! You are considerably more capable than you realize! Keep in mind your potential! You, like Cruella, have great dreams. Remember how she insisted on a Dalmatian fur coat? “No” is not an option for you, and when you don’t get your way, you take charge in an ineffective way. Fight for what you believe in, but don’t step on other people’s toes in the process. Maleficent is the best Disney villain to you because you can relate to her. Maleficent, like you, is an extremely social creature who can’t take missing out on major occasions. You may easily be classified as a social butterfly, and you frequently experience anxiety when friends (or even strangers) hang out without you.

#6 Gaston from Beauty And The Beast If you adore Gaston, you’re probably quite self-absorbed, but don’t take this the wrong way! You place high importance on your appearance and work diligently to ensure that you always appear presentable. You understand why Gaston is so proud of his appearance, even if you don’t necessarily encourage narcissistic conduct like Gaston’s.

#7 Ursula from The Little Mermaid You respect Lady Tremaine in a strange way. Why? You admire her dedication to her family. You’ve always been entirely committed to your loved ones, and you’ll go to any length to defend them and ensure their happiness. You understand why Lady Tremaine pamper her daughters Anastasia and Drizella the way she does, even if you disagree with her treatment of Cinderella.

#9 The Evil Queen from Snow White And The Seven Dwarfs You’re a man of action and a believer in what you stand for, so it’s only natural that you have a special place in your heart for The Evil Queen. You, like her, want to be the greatest (or most fair) in whatever you do. Your fiery personality can come across as a little harsh at times, but you truly care. Maintain your competitive spirit, but don’t let it take over your life!

#10 Scar from The Lion King Because you are such an emotional person, you’ve always had a special love for Scar. You, like Scar, are prone to feeling sorry for yourself and your current dilemma. It’s impossible not to compare yourself to others and feel resentful of their good fortune. You actually care about others and want them to succeed, despite your emotional nature. Have you always secretly admired the evil prime minister Jafar from Aladdin? The two of you have more in common than you think, and the biggest thing in common is that you both fight hard for a materially rich future. There’s nothing wrong with this, you just want a better future, but don’t forget that money isn’t everything. It is love and happiness that is the most important thing in life!

If you found this article interesting, don’t hesitate to visit our website aubtu.biz to get access to a wide range of news about your favorite comics.