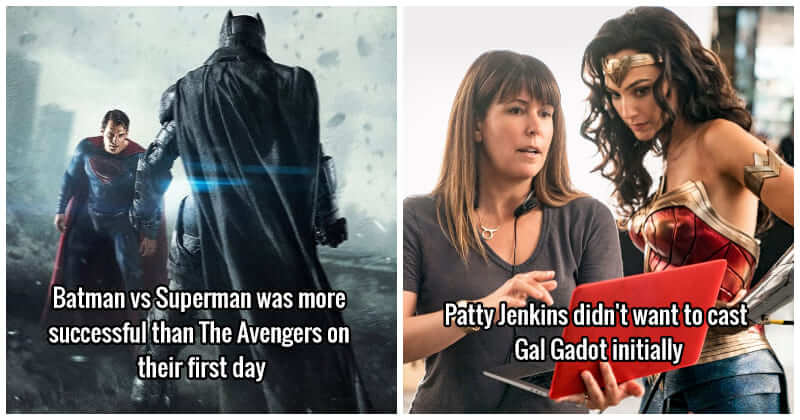 In today’s world, fans have more information about a film’s status than they have ever had before. There’s virtually nothing that doesn’t become public information, whether it’s casting options being explored, when filming will begin, or production issues. Gone are the days when movie fans had to rely on magazine articles or books published years after the film had been released to learn about the film.

Despite the abundance of knowledge, certain facts remain unknown. Fans have discovered news years after their beloved movie’s debut, only to discover that not everything was as it seemed. There will undoubtedly be intriguing pieces that fall between the cracks due to the sheer volume of news out there. Thankfully, we’ve assembled a list of some of the more intriguing parts of the DCEU that will no doubt surprise most fans!

#1 DCEU is not an official name The DCEU stands for DC Extended Universe, however, it is not an official label, and DC and Warner Bros do not refer to it as such. It was invented by Keith Staskiewicz from Entertainment Weekly when writing about Batman vs Superman, and everyone simply went with it.

#2 DCEU broke both good and bad records of Box Office The box office multiplier is one of the metrics used to determine a film’s performance. DCEU movies have both a good and bad track record in this term. Wonder Woman got a 4.0 multiplier, which is unusually high for a superhero film. Batman vs Superman, on the other hand, had a multiplier of 1.99, making it the first film ever to start with more than $100 million and not have at least a multiplier of 2. After the release of The Dark Knight, Warner Bros considered making a Justice League film called Justice League: Mortal. It would include most of the key characters, including Batman. For the time being, such preparations have been halted due to Christopher Nolan’s strike. You might ask why? Because this was in the middle of Batman’s trilogy, and Christopher Nolan was not happy about releasing another movie while Batman was still telling his tale. In the MCU, Captain America and Thor are two of the most popular and well-known characters. Their films, on the other hand, were far from a rousing hit; probably just above average. However, everyone is aware of Wonder Woman’s phenomenal success, but it may surprise you to find that it outperformed both Thor and Captain America’s first two films put together.

#6 Co-creator of Batman was credited for the first time Batman was created by Bob Kane, while Bill Finger added details like the cape, cowl, and even the name Bruce Wayne. This wouldn’t be a huge deal if it weren’t for the fact that Kane never credited Finger throughout his life. Years later, Kane confessed that Finger had a huge effect on the Batman character and expressed sorrow for not admitting this when Bill was still alive.

#7 Man of Steel has religious marketing Zack Snyder once stated that Superman contains religious elements, which he did depict in the film. Whether you agree that targeting religious people for a film is acceptable or not, it was an unusual strategy. In Wonder Woman, the scene No Man’s Land battle is when Wonder Woman as a character comes to life, and it’s crucial to her development. It may come as a surprise to learn that several members of the filmmaking team did not want this sequence to appear in the final version. Gadot revealed that she was offered a role as an evil villain in Man of Steel. Although she didn’t specify the position, it’s safe to assume it was Faora, the Kryptonian who travels with General Zod to Earth. Initially, fans were not the only ones who is dissatisfied with Gadot’s casting. Patty Jenkins admitted that she would not have cast Gadot in the part if it had been up to her. In fact, she stated that she had been presenting various Wonder Woman casts to Warner Bros.

#11 There is no DCEU video game after Man of Steel Since the movie Man of Steel, there have been no connected video games with any DCEU film. Some of this is because DC games like the Injustice series and Batman Arkham games have been great successes, thus there isn’t much of a need or desire for pure DCEU games, unlike MCU which has been filled with so many related games over the years. In the run-up to Batman vs Superman’s release, Turkish Airlines has launched a pair of promotional videos representing Gotham and Metropolis as destinations served by the carrier.