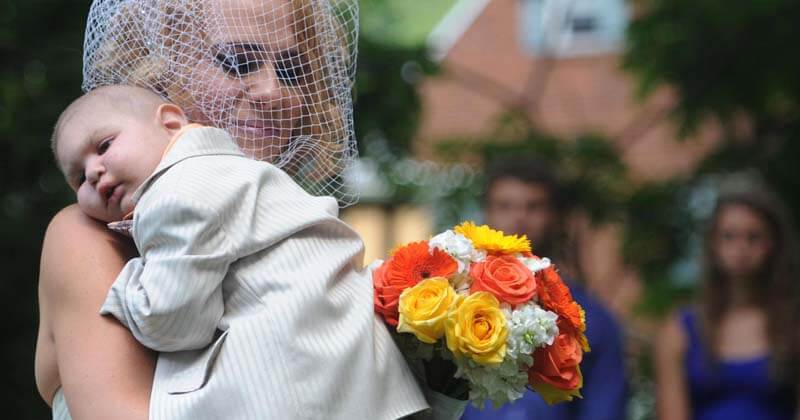 Christine Swidorsky Stevenson said on her Facebook page that at 8:18 on Monday night, Logan Stevenson Jr. died in her arms at the home she shared with the boy’s father and her new husband, Sean Stevenson. . The couple lived in Janet and held their wedding in their home on Saturday.

“He is with angels and he’s in no more pain,” she said.

“It’s been tough,” said Debbie Stevenson, Logan’s grandmother. “I saw Logan being brought into the world when he was born, and I’ve been with Logan since day one.”

Logan’s grandmother and aunt say his parents, understandably, are going through an incredibly difficult time.

“They’re pretty devastated; it’s been pretty hard on the family,” she said. “We just all sat there and cried and held him.”

The boy, who suffered from complications such as leukaemia, wore a tan pinstripes suit and an orange shirt at a 12-minute ceremony on Saturday.

Sean and Christine wanted their son to be there for the happiest and most memorable day of his life.

He spent his last days at home in the arms of his parents. “I just held him, and Sean held him,” said Christine Stevenson, “and we held him together and we were on the couch and Sean kept saying, ‘It’s OK. It’s OK to go Logan.’”

“Because at that point, I’ve already made my peace with God,” said Sean Stevenson. “You know, I was accepting the fact that he needed it more than we did and that one day I will see him again. I believe that.”

They bumped up the wedding date over a year and friends, family, even strangers, pitched in to pull the whole thing off in about a week.

Logan’s aunt says the wedding day, with Logan as best man, gave his parents an incredible gift. And they’re so very grateful for support from all over.

“It’s a very hard thing to go through this. It leaves a big hole in your heart to lose a child,” said Kellie Young, Logan’s aunt. “The thoughts and prayers that everyone gives, they’re little things, but they get us through each and every minute.”

Logan’s mom ended her Facebook post with these words: “God Bless Logan. I’ll c u in my dreams, my son.”

The family has set up a fund to help pay for Logan’s medical bills.

“You Love Sleeping But Sleeping Doesn’t Love You”, Explaining In 15 Funny Memes