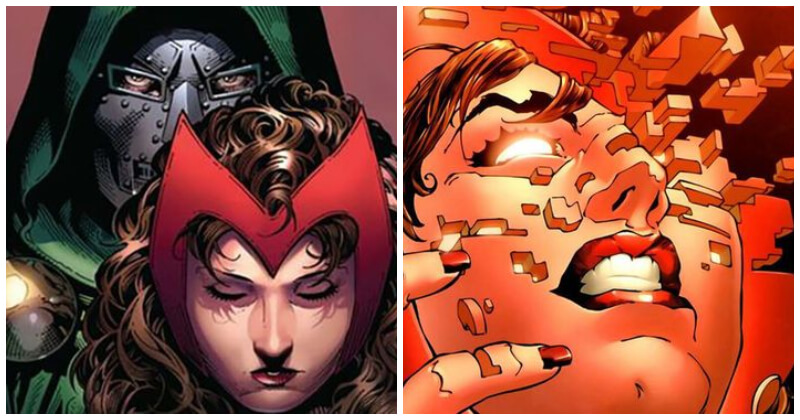 Wanda Maximoff (aka the Scarlet Witch) is considered one of the MCU’s most powerful Avengers by hardcore fans. While she lacks the physical strength of superheroes like the Hulk, her reality-bending abilities are the most potent collection of talents ever seen in Marvel comics.

In the comic books, many of the Scarlet Witch’s stories show how dangerous she can be. Her abilities have not only grown over time, but she has also developed new ones. She did some good things, but she also did some heinous things that harm others. She is so hazardous that she is classified as one of the world’s most powerful omega-level mutants.

Here is a taste of some of the craziest things Scarlet Witch has done in Marvel comics.

#1 Wipe out an entire population – “No More Mutants.” “No more mutants” Three few words altered the Marvel Universe forever. All mutants on Earth were de-powered, with the exception of a few hundred X-folks. It’s the first time a genocide has taken place without any mass deaths.

#2 Warp reality to give everyone the life they desired Wanda accomplished the impossible during Marvel’s House of M event. She ensured that everyone had the life they desired. Mutants were not condemned but rather celebrated for their genetic abilities. It was all a lie, though. Wanda transformed the whole reality of Earth with her mind.

#3 A member of the brotherhood of evil mutants Scarlet Witch first appears in Marvel Comics as a villain and one of the Brotherhood of Evil Mutants’ most formidable members. She aided Magneto in more than one attempt to defeat the X-Men. She and her brother finally broke away from the villains and joined the Avengers, where she became a hero. Scarlet Witch utilized her magical abilities to get pregnant with Vision’s kid, and she gave birth to twin sons. Wanda used Black Magic to make these children, and Mephisto helped her do it. Wanda lost control of everything when being awakened memories that Agatha Harkness had erased. The Kree attacked, and it wasn’t until Hawkeye and Ant-Man died that they understood it was Wanda’s illusion. Both of those heroes died in the end, as did Jack of Hearts, and the Avengers disbanded as a result of the treachery. Wanda’s tutor and friend Agatha Harkness taught her how to regulate and channel her exceedingly unpredictable talents. But when Wanda discovered what she had done in Avengers: Disassembled, she became outraged and murdered her instructor.

#7 Get married to Doctor Doom In “The Children’s Crusade,” Wanda was getting ready to marry Doctor Doom. Doom would gain ultimate magical abilities if he married, and when he was stopped, he killed Cassie Lang, Ant- Man’s daughter. Wanda and Doctor Doom devised a spell to halt Red Onslaught, a fusion of Red Skull and Onslaught that may destroy the planet. They wanted to inverse Red Skull’s moral compass and make him good. As a result, Wanda’s next spell backfired spectacularly: all of the superheroes becoming villains and vice versa. Magneto and Quicksilver attempted to stop Scarlet Witch from killing Doctor Doom and crossing the line during AXIS. Wanda became enraged and cast a spell to murder everybody who had blood links to her. Wanda wanted to make amends by reviving all of the mutants that Cassandra Nova had slain in Genosha. This backfired when all of Genosha’s deceased mutants resurfaced as mutant zombies and attacked Krakoa.