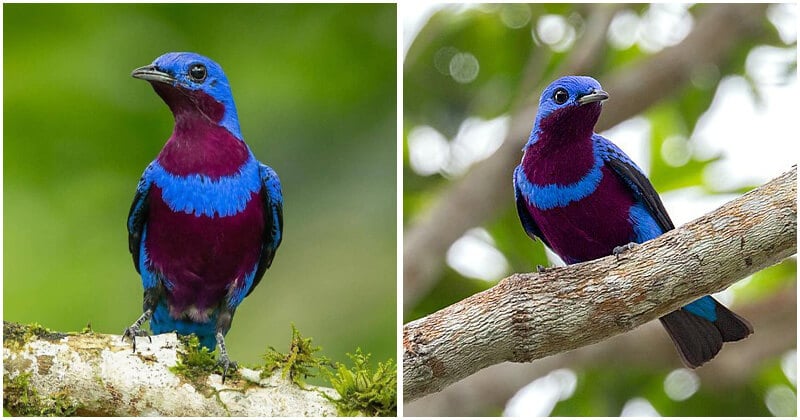 This world is full of astonishing creatures but unfortunately many of them are on the brink of extinction due to quickly disappearing habitats and illegal hunts. One of them is the banded cotinga, a stunning bird that is sadly clinging to survival.

This unique bird stands out in the crowd thanks to its striking shade of cobalt blue and its dark magenta throat and chest, not to mention the black polka dots on its back as well as back borders on its wings and tail.

Like other members of the family Cotingidae, the female banded cotinga is duller than the male with light brown plumage, which is highlighted by some white mottling.

An adult banded cotinga measures about only 0.4 inches in length so it’s no surprise that this unfussy bird’s nest is just a simple cup.

These little birds’ favorite foods are seeds, berries and caterpillars, but occasionally they feed on other fruits and other insects too.

This non-migratory species is endemic to the Atlantic Forests of southeastern Brazil.

The banded cotinga’s population is decreasing rapidly due to habitat fragmentation.

At this moment, there are only less than 1000 mature individuals existing in Brazil. They are mostly found in a few protected areas like the RPPN Estação Veracel and Reserva Serra Bonita.

Let’s take a look at this gorgeous creature:

Reddit Talks Over Passing A New Law For Pet Owners: Is It Finable To Unleash Pets While Driving?