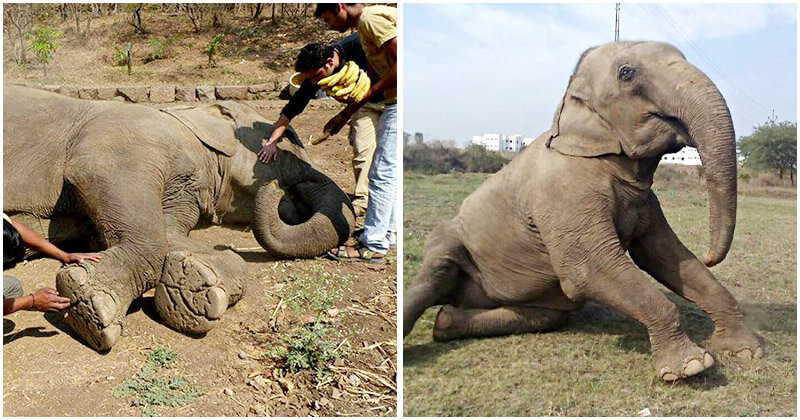 Despite being the biggest animal on land, the elephant is known as one of the sweetest and most gentle beings in this world. Maybe it’s also the reason why elephants are vulnerable to torture and abuse, they could hardly protect themselves in front of countless cruel people who see them as a money-making machine no less.

Lakhi the blind tusker is one of those luckless creatures. The poor girl was blinded on purpose by her owners when she was just a young calf and most of her life had been nothing but torment since then.

For almost  60 years, she was imprisoned with spiked chains, constantly forced to wandering around many temples and small towns in India, begging for money. And if she misbehaved, they would beat and whip her mercilessly.

Needless to say, the mistreatment resulted in plenty of health issues and there was literally nothing the pitiful elephant could do but suffering.

Lakhi had many injuries and wounds all over her body, not to mention the high risk of road accidents when she was totally blinded.

Thankfully, after spending decades in pain and neglect, Lakhi’s horrible situation was finally noticed and the court decided to step in to grant her the freedom that she obviously deserved. She was rescued by the Wildlife SOS – an Indian organization that aimed to protect and conserve the precious wildlife in this country.

With the help of the rescuers, Lakhi started her journey of 870 miles to reach the Elephant Conservation and Care Center in Mathura, where she would be living her life to the fullest alongside other rescue elephants just like her.

The girl couldn’t be any happier with all the fresh fruits, water and medical care she received on the way. And when they eventually reached the spot, her face littery glowed with a bright smile!

Congrats, Lakhi! We wish you plenty of love and luck in your new family.

Update: According to the latest update from Wildlife SOS, Lakhi passed away after three years living peacefully at the Elephant Conservation and Care Center. Her departure was “sudden and unexpected”, but she will be missed forever.

“As we struggle to find words to express the grief we feel at her loss, we hope you find some comfort in knowing that she was not alone at the time – she was surrounded by the elephants who have been her family and friends for the last 3 years,” they wrote. “She died in the company of those who loved her and looked out for her.”

Please share Lakhi’s moving story with your friends and family!

Woman Takes Her Mother-In-Law’s Dog Away From Their Home, But Reddit Sides With Her

All Types Of Animals In Vietnam | Aubtu.biz