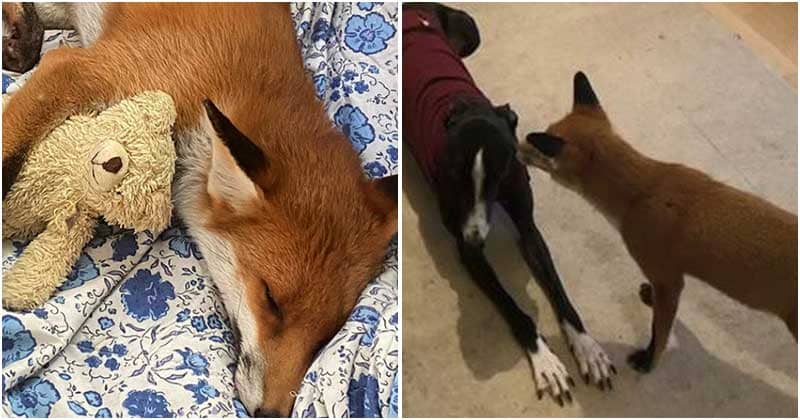 The friendship between animals blossoms naturally. Nothing can prevent them from making friends. A tiger befriends a brave goat given to it as live food. A baby elephant builds a special bond with an orphaned giraffe. A bear, a lion, and a tiger live together as a family. They find love and comfort in their friend’s hugs and ready to lay trust in them. They do this much better than us, adult humans.

And, Woody the rescued blind fox, Bramble the deer, and Orla the greyhound in this story do the same. The trio becomes inseparable at the Warwickshire Wildlife Sanctuary where they are living.

Unlike the other two friends, the blind fox was spotted on the side of the road and taken to Geoff Grewcock who run the sanctuary years ago. It was still young and faced a serious health condition when rescued. The fox cub had 150 ticks in it.

The vet also said that Woody would go blind, so Mr. Grewcock decided to find the fox some companions. They might serve as his guide and spice up his colorless life.

Amazingly, the poor animal not only recovered but also befriended Orla and Bramble living there.

Mr. Grewcock let the blind fox cub have meals with the greyhound and hang around with the deer. They soon made acquaintance with one another and became best friends.

Woody considered itself a house dog and enjoyed its life in that way. It spent time eating, playing, and walking with its friends. They got a lot of fun together.

The unusual friendship of the trio amazes Mr. Grewcock and wins the Internet. Pure and beautiful.

Regarding the Warwickshire Wildlife Sanctuary, it was run in 2001 when Mr. Grewcock retired from work. The kind-hearted man transformed his Nuneaton garden into a wildlife sanctuary to help animals. So far, the number of animals that have got his help is over 62,000. His family and supporters have also contributed greatly to this work.