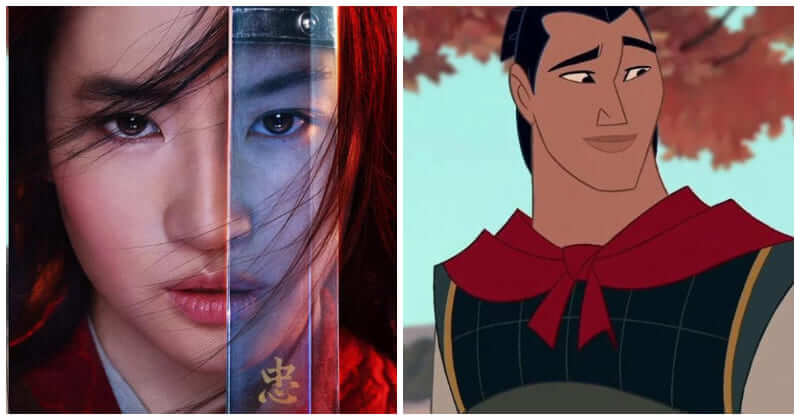 Do you have any plans for this weekend? Are you going shopping or spending all your time trying to finish a deadline? Whatever you plan to do, keep in mind that Disney’s live-action Mulan recently debuted on Disney+, with reviewers hailing it as one of the finest live-action Disney films ever created. So, perhaps you could apologize to your credit card and pay the $30.

While the 2020’s Mulan, featuring actress Liu Yifei (aka Crystal Liu), offers the same basic plot as its animated predecessor, the two films are vastly different. Some people prefer the animated version, others say that this new version is more interesting. But either way, both versions are excellent and well worth your time to watch! Let’s find out some of the differences between the two versions of this popular movie and don’t forget to let us know your thoughts in the comments!

#1 The live-action version is not a musical

The live-action version, unlike the animation version, omits a lot of musical moments. The choice to remove the live-action Mulan’s music drew considerable criticism, but worry not: the soundtrack includes instrumental versions of the popular songs.

#2 There are much more new battle scenes

Mulan 2020 contains a lot of battle scenes that are guaranteed to please a lot of people! But there isn’t a single drop of blood. As director Niki Caro says, “You have to deliver on the war of it. How can you do that when you can’t depict any violence, gratuitous or otherwise since you’re a Disney product? I’m quite pleased of those sequences. They’re stunning and epic, yet you can still bring your kids. There was no bloodshed. It’s not the same as Game of Thrones.”

#3 Two new villains in the live-action! The live-action version introduced Böri Khan and Xianniang, both of whom are more well-rounded and complex characters than your average “Disney villain.” Producer Jason Reed told journalists: “We wanted to have a female antagonist in the movie, as well as just having the male antagonist so that we could explore female power in that society and in different ways and have different perspectives on it.” Yoson An plays Honghui, Mulan’s fellow soldier who is clearly attracted by her. Mulan bonds with commanding officer Li Shang in the animated version, but not in this one. So, what’s the deal with the switch? The producers believed that a commander-soldier relationship would be an unsuitable power dynamic.

#5 Mulan now have a sister Mulan 2020 opens with some lovely scenes with Mulan’s sister, which Jason Reed describes as a “contrast between a woman that is really going outside the normal boundaries and two different approaches to life but they’re both great sisters and friends but it shows the contrast between them. For me, anyway, it helps illustrate what’s interesting and unique about Mulan.”

#6 Mulan decided to reveal her identity Mulan’s identity is discovered against her will in the animated film, and she is expelled from the army as a result. Mulan has greater agency in the 2020 live-action version, as she is the one who decides to tell her fellow troops the truth. Mulan is also asked to head the army, despite the fact that they do not believe her when she informs them that the emperor is in danger. And Mulan’s cricket isn’t either! However, there is a soldier named Cricket in the film, and animals play an essential role. Mulan’s bond with her horse is evident, and a phoenix plays a significant part that I will not reveal.

#8 And lastly, the ending is unexpected!

Let’s discuss the ending quickly without going into too many spoilers. Mulan rescues the day and comes home to her family in the majority of the films. However, the entire action scene of her saving the emperor is radically different, and Honghui does not accompany her home, rather, they share their “moment” at dusk before she departs. Oh, and Mulan does not completely reject a place in the emperor’s guard!

Mom Couldn’t Get Baby To Stop Crying In Her Crib, Now Watch When The Cat Puts His Paw Up