A UPS deliveryman and Golden Retriever had a handshake deal in place: every time the man came by the house, he was to give the dog a treat. Pretty standard stuff, right? Well, this went on for a while when one day the deliveryman forgot to bring the treats. The dog wasn’t happy, so he took matters into his own paws!

The dog did what he thought he had to do to get a treat and hopped into the truck while the deliveryman was dropping off packages and not looking. The dog hid in the back of the truck and ended up taking a ride all over town! When the man discovered the dog back there later on, he brought the Golden back to his owner.

The dog’s owner found the entire situation hilarious and took to Reddit with a form of “dog shaming.” He pinned a note on the dog and shared the picture with everyone. 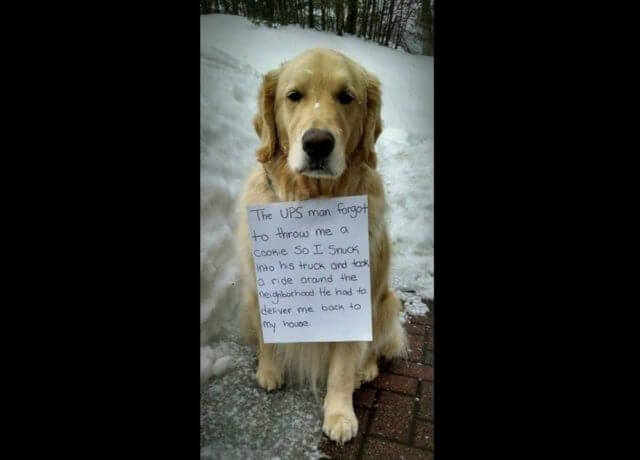 “The UPS man forgot to throw me a cookie so I snuck into his truck and took a ride around the neighborhood. He had to deliver me back to my house.”

Redditors chimed in with their own stories of pets taking special interest in UPS guys, the top one being:

The moral of the story for all mail and delivery people: make sure you never run out of treats on your routes or you may end up with a furry passenger! ????