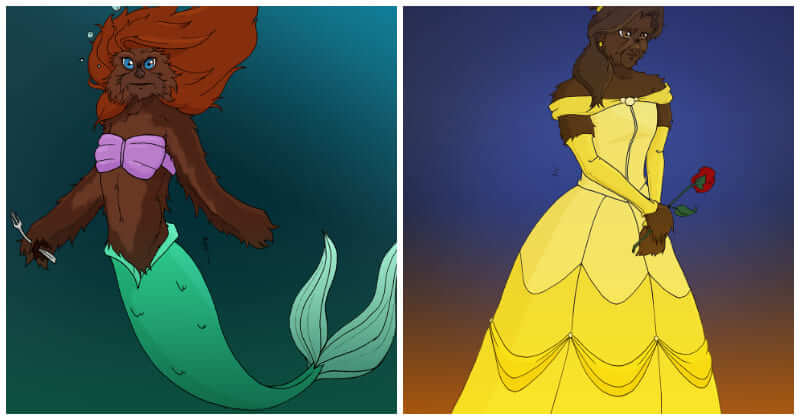 With just a few lines of search on the Internet, we can see a million results about Disney Princess mashups. We’ve seen them as beloved characters in popular movies like Game of Thrones, Jedi, X-Men, and more. Sooner or later, someone will turn these Disney beauties into characters from one of the best-selling sci-fi movies of all time – Star Wars. That time has come. But guess what? They turn our beautiful princesses into hairy Wookies.

And, yes, it is as odd as you might expect. They were created by outstanding artist Michael Nozinich for OBSVE’s Star Wars Day event. This illustrator had the boldness to mix two entirely distinct universes in the strangest way as possible. Well, it might be unusual, but trust me when I say it’s a lot of fun and well worth seeing! Wookie Snow White probably lives a very safe life without having to worry about The Evil Queen anymore. After all this hairy thing, she can’t be the most beautiful person in the world anymore, right? Surely Wookiee Ariel will make us wonder: How does all that fur move in the water? Is it waterproof? If a full-size Bengal tiger wasn’t enough, daring suitors may think twice about approaching Princess Jasmine this time with her new pet. Not going to lie, we’d be absolutely okay with Belle turning into a Wookie at the conclusion of the movie as well. In that scenario, “Wookie And The Beast” will be our favorite film. I can say that Merida will be the happiest when she turns into Wookie because she can now live freely in the forest. But I’m sure she’ll adapt quickly, she’s experienced with furry things.

After Being Criticized For Sitting In A Chair By Manager, Employee Quits The Job

18 Extreme Acts Of Pettiness That Will Make You Cringe

30 Of The Best “Millennial Mom Confessions,” As Shared On This Instagram Page

“Can’t Afford A Lot Of Food”: Satisfying Times Delusional Bosses Got A Reality Check From Employees