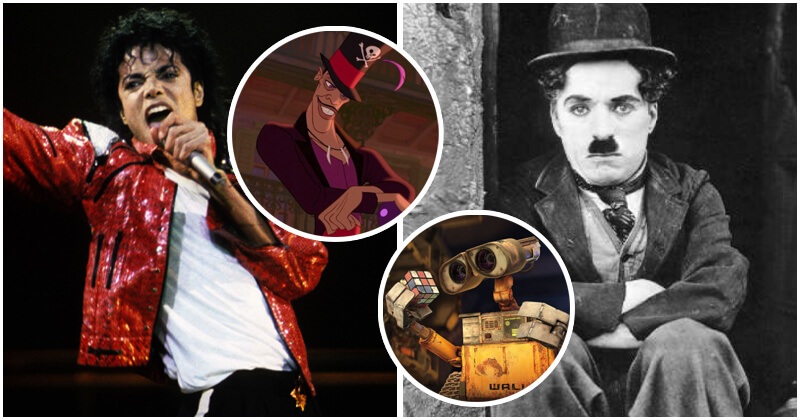 Even though most of Disney’s animated characters are the results of the animators’ imaginations and creativities, many of them were actually created based on several well-known people in real life who shined brightly in Hollywood with some impressive traits or fascinating appearances that could inspire others. Thanks to these models, our beloved characters somehow became much more realistic and relatable. So, who are they anyway? Let’s check this amusing list below and find out if your favorite actor or actress is there! Wall-E can’t talk, and who is the king of them all when it comes to acting with facial expressions only? Charlie Chaplin, of course.

#2. Anika Noni Rose: Tiana from “The Princess and the Frog” Tiana was created based on her voice actress Anika Noni Rose. Just like Tiana from The Princess and the Frog, The Lion King‘s villain Scar was created based on his voice actor Jeremy Irons. The animators of Sleeping Beauty created their antagonist based on the American actress Eleanor Audley, who later voiced this character. After showing up in the 1948 film On An Island With You, the 10-year-old Kathryn Beaumont immediately draw attention thanks to her sweet appearance and only 3 years later, Alice in Wonderland was born with the leading role looking pretty similar to her. Many Disney fans already heard that the legendary comedian Robin Williams lent his voice to Genie in Aladdin (1992), but not many know Genie was created based on Robin himself because the filmmakers truly wanted him to join their movie. As shared by director Richard Williams himself, Jessica Rabbit was totally inspired by the American actress, dancer, and producer Rita Hayworth. #9. Michael Jackson: Dr. Facilier from “The Princess and the Frog” If you are a big fan of the King of Pop, it’s not hard to recognize his traits in Dr. Facilier’s musical performances.

#10. Harris Glenn Milstead aka Divine: Ursula from “The Little Mermaid” The looks of The Little Mermaid‘s main antagonist – Ursula was mostly inspired by the American actor and drag queen Devine. Another animated character who was inspired by his voice actor, Captain Hook from Peter Pan!

Even though The Incredibles director Brad Bird hasn’t revealed anything about Edna Mode’s prototype, fans of the actress Linda Hunt could easily recognize her style and personality traits in this passionate character.

#14. The Beatles: 4 vultures Buzzie, Flaps, Ziggy, and Dizzy from “The Jungle Book”

Remember the vultures with hilariously unique haircuts from The Jungle Book? The movie was aired in 1967 when The Beatles was extremely popular in the whole world, so we can’t say that we are surprised. Snow White and The Seven Dwarfs was Disney’s very first animated movie so to make their leading girl as lively and real as possible, the filmmakers had counted on the help of the famous American dancer Marge Champion, who was only 14 years old back then.

#16. Ed Wynn: The Mad Hatter from “Alice In Wonderland” It’s not hard to spot the similarities, right? It’s no secret that Pocahontas was created based on a true story about a same-name woman, but Pocahontas’ appearance was mostly inspired by her voice actress Irene Bedard. Christopher Robin was the son of Christopher Robin Milne – the author of the children’s book Winnie-the-Pooh which inspired Disney to come up with its own animated version. It makes more sense now, isn’t it? It’s said that Walt Disney loved animations so much that he wanted to introduce himself as an animated character, and then Mortimer Mouse was born.

The Aristocats‘ Scat Cat was created for Louis Armstrong, who was nicknamed “Satchmo” and “Satch”. That’s also the reason why Scat Cat was first named Satchmo Cat. The boy who never grows up was another character that was designed based on his voice actor, Bobby Driscoll.

Have you ever wondered where Aladdin got that winsome smile? Tom Cruise, ladies. Tom Cruise. While Aurora’s slim body was drawn based on Audrey Hepburn, her face and elegant moves were inspired by Helene Stanley.

It took Disney animators a lot of time to find Tinkle Bell a perfect real-life model, and they eventually found the actress Margaret Kerry.

Fantasia‘s Chernabog was created based on Bela Lugosi, the Hungarian-American actor who played Count Dracula in the 1931 movie Dracula.

Jennifer Lawrence Lost Control At The Peak Of Her Career, Will Stop Doing Franchises