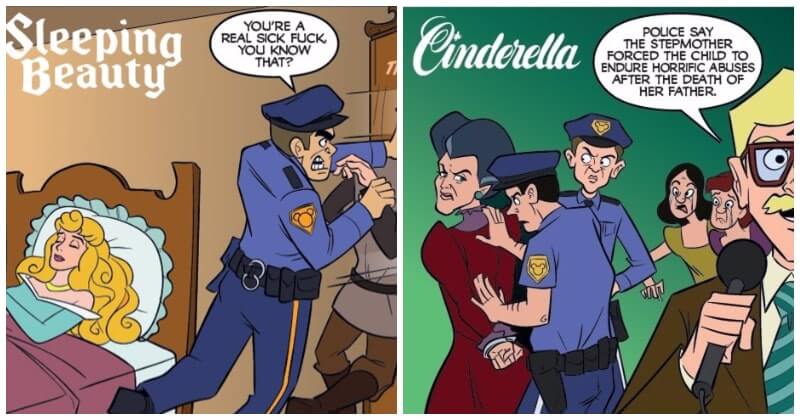 The context of Disney animated films usually takes place in the medieval period, when most countries in the world were still under the rule of kings or witches. Therefore, the way Disney characters act is not regulated by a legal system but mainly based on the wishes of the screenwriters. These behaviors are sometimes unreasonable, but that’s just how things are in Disney animations.

Paul Westover, a talented illustrator, one day wondered how these magical movies would turn out to be if the cops enforced the law in the Disney universe. Not long afterward, he collaborated with College Humor and took it upon himself to create hilarious fanart of police interfering in Disney iconic scenes. These drawings will completely change the whole plot of Disney films in such a humorous way that you definitely could not imagine before.

Scroll down to discover these comical drawings and let yourself be entertained after such a hard-working day! How can you kiss a girl when she’s in a coma? Such a pervert you are! It looks like Geppetto is really in trouble. He’d better come up with a good excuse or he might end up being charged with child abduction by the police. With the police’s outstanding investigative skills now, I believe Rapunzel will be found soon and won’t need to spend all her childhood in the tower like what happened in the movie.

#4 Beauty and the Beast The police would never put an innocent person in danger and so we certainly won’t get to see Belle and the Beast’s love story. Let’s join the police and find justice for Mufasa! With Child Protective Services, the stepmother certainly could not have abused Cinderella like that.

20 Advertising Placement Fails That Turn Out An Unexpected Win

18 Designers Who Got Carried Away By Creativity

30 Mildly Interesting And Funny Photos That Might Entertain You

25 Interesting Photos That Will Make Your Jaw Drop

16 Most Awful Homes You’ll Ever Find On “That’s It, I’m Home Shaming”

20 Posts Online That Are Instances Of “If It Hurts To Look At, Post It”