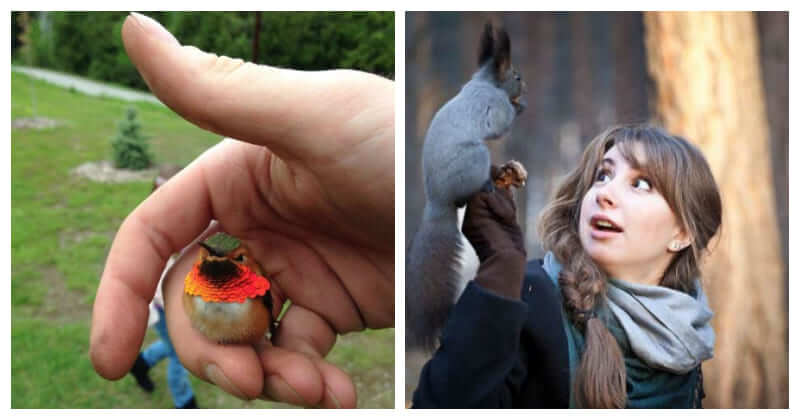 Disney movies always amaze viewers by creating an unbelievable magical world where mice can sing, cockroaches can clean the house, animals can run freely and even communicate with humans. I believe such a world goes beyond our farthest imagination. You watch those adorable harmonies while thinking there is no way such things could happen in real life, don’t you?

Well, let me tell you that you just haven’t witnessed the moment when the miracle happens. Disney’s magical scenes may happen to us anytime. You will never know what may come as rare moments pass unnoticed. Here are some Disney-like scenes randomly captured by people in real life.

Imagine this: one day, you walk down the street and meet Pip as this man did. Coincidentally, he becomes Prince Edward who is on his way to looking for Giselle. Plus, this man’s face and reaction look so like Edward, which makes it so funny. This little girl is truly a future Disney princess in training. This moment provokes the image of Snow White and her kindness to all animals around her. How can our hearts not melt to the floor when seeing this?

One more time, we catch a Snow White-like moment. This is like the time when she got lost in the dark jungle and after crying for hours, she woke up feeling loved by the acceptance of a wild bunny.

Look at this! A little baby had first met with Mr. Absolem. In case you don’t remember, Absolem, the Blue Caterpillar, is a fictional character from the movie Alice’s in Wonderland. When a pretty bird swoops down and lies on your hand, you are now one step closer to becoming an authentic Disney princess. Specifically, you are now Cinderella who can talk and sing along with the bird. This is such an adorable moment. Disney Princess challenge accepted.

This officer demonstrated his ‘Disney Princess skills’ by attracting a woodpecker. Oops, when you try to be friendly with animals to have your dreamy Princess moments, it counteracts. Poor this guy, it seems like the deer was too hungry on that day. Get some help, young man!

This little girl had her Rapunzel-like moment as a gecko was hiding in her shirt. Now that Pip met Giselle in real life, but Giselle was quite freaked out… When Pip gets closer to Edward, they’ve become companions since then. It’s so cute, isn’t it? This scene also shows how wild animals can harmony with humans as long as we love them. The squirrel fell in love with this man.

20 Cats And Dogs Who Are The Most Lovable Derps

20+ Incredible Pets Whose Talent We Can’t Help But Admire