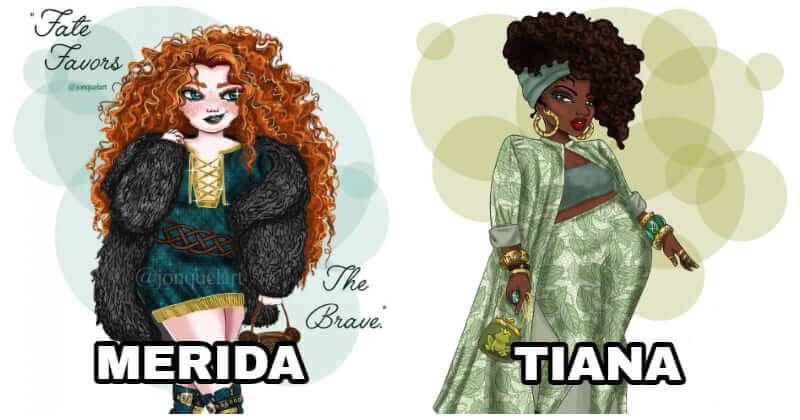 Jonquel Norwood, a lifestyle and beauty illustrator who “emphasizes plus-size fashion” in her work, has just redrawn your favorite characters with curves and trendy outfits. She was inspired by recent studies which show the average size of American women is 16-18, as well as recent findings that 67 percent of women are plus-size. She has started her series of plus-sized characters in Disney and other movies, which has gained a lot of attention on the Internet, thanks to her drawing talent and limitless imagination.

Let’s check out her stunning artworks and don’t forget to tell us which one is your favorite! Harley Quinn is famous for being sexy, but the plus-size version of the Harley is 10 times sexier! Is it illegal for a serial killer to be this sexy? Cinderella is now as beautiful as a stylish and rich lady! She both scared me and made me obsessed with her at the same time!

#6 Tiana from The Princess And The Frog #7 Wednesday Addams from The Addams Family Both innocent and dangerous, she’s the one who can play with your heart (literally)! Aurora looks much more stunning with a little bit of curvy added!

#9 Sally from Nightmare Before Christmas How can any dead person still be as beautiful and trendy as Sally? Don’t let her sexy looks fool you, she can kill you with both her beauty and her nails!

#11 Belle from Beauty And The Beast No longer the fragile Belle because now Belle is extremely healthy and energetic! Disney’s first princess in modern times will definitely be a trendy urban girl! I really fell in love with this plus-size version of Rapunzel! She really looks like a women boss who is powerful and trendy! Elsa is definitely the famous Hollywood star with deadly curves! The guy Hans is now definitely regretting missing a beautiful and cool girl like Anna. With a bit of curves added and stylish outfits, Merida’s sure to be the focus of any party! If beauty could kill, then Mulan would be a serial killer!

These Magnificent Realistic Paintings Will Definitely Deceive Your Eyes