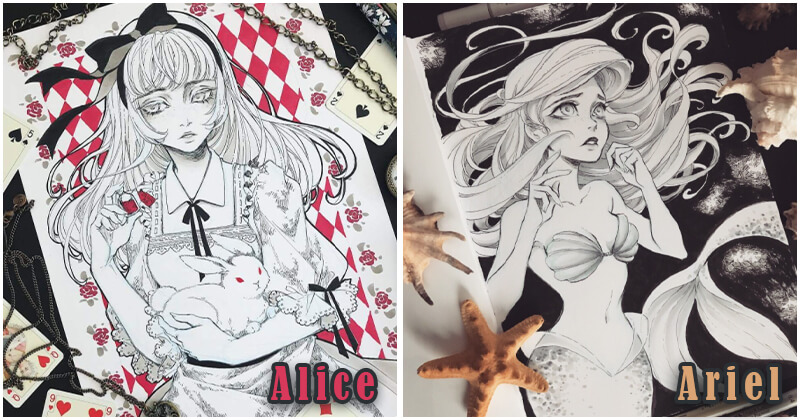 Turning classic Disney animated girls into adorable anime characters, why not? Artists Luleiyadaily, Lariennechan, and DuckLordEthan shared the same thought and decided to turn this genius idea into reality themselves!

These three talented illustrators all have a passion for anime/manga art and they have been extremely obsessed with Disney movies since their childhood as well. By merging the best features of these two worlds, they have created some mind-blowing digital paintings in which Disney characters are reimagined in anime style, and the results are truly magical. All of these illustrations are so lovely and adorable to the point that they could even make it to the cover of a manga magazine someday.

You surely should never miss these brilliant illustrations below if you’re interested in this topic, but if you’re not keen on anime, I still believe that you will enjoy these masterpieces.

#1 Snow White from “Snow White and the Seven Dwarfs” This look of Snow White looks so lovely and beautiful, isn’t it? Is this peaceful scene enough to put your heart at ease?

#3 Princess Belle and her Beast from “Beauty and the Beast” I love the facial expression of Belle in this fanart so much. It is so charming and cute at the same time. Which version of Mulan do you prefer, a gentle girl or a strong female warrior? It seems that Moana looks gentler in anime style, right? #7 Judy and Nick from “Zootopia” They’re still the best duo no matter what. Challenge: Paint Rapunzel in your own style!

#9 Alice from “Alice in Wonderland” With her melancholy eyes and several cards in the background, Alice looks a bit less naive and more sensitive than usual.

#10 Ariel from “The Little Mermaid” Even the lack of color can’t hide Ariel’s gorgeous beauty. Save the best for last, this fanart about Queen Elsa is my favorite so far!