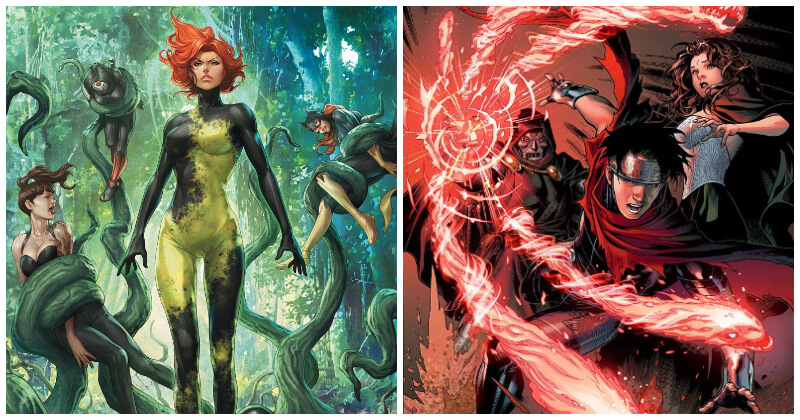 In the comic universes, there are thousands of superheroes as well as villains and anti-heroes. Each represents a unique set of abilities and character traits and they are all fighting either to make the world a better place or for their personal goals.

Superheroes are great role models for both kids and adults on how we should be living our lives. But sometimes, they can show you more than just power, it is their courageous love and free life that can inspire you to be brave and stay true to who you are.

For pride month this year, we are presenting you a shortlist of 20 superheroes and villains whom you can look up to not only because they are powerful but also their bravery to show the world who they choose to be and love. Kate Kane, aka, Batwoman was reintroduced in 2006 as a lesbian who became one of Gotham’s crime fighters after her service in the U.S. Army was cut short when her sexuality was discovered while the military’s “don’t ask, don’t tell “policy was in effect. Apollo is a member of Stormwatch, he can draw energy from the sun and can store it. His powers include flight, thermal vision, near invulnerability, and super strength. The character has been romantically involved with Midnighter throughout much of his history. Northstar’s first declaration “I am gay” is in the pages of a mainstream comic (1992’s Alpha Flight #106). 20 years later he made another remark by marrying his partner – Kyle, in Astonishing X-Men #51 — this is the ever first same-sex wedding in the Marvel Universe. Raised by two moms in a parallel world, America Chavez is the fan’s favorite superpowered lesbian Latina, she wins the hearts of fans in every comic she’s in. Her powers include invulnerability, strength, and the ability to punch through dimensions. Karma is a member of the first generation in New Mutants. She has the power to take mental possession of people and direct their actions, even from a great distance. Selina Kyle, aka, Catwoman is the infamous feline femme fatale of Gotham City. In Catwoman #39 she reveals to Batman that she’s interested in both genders, adding her to the ranks of high-profile LGBT characters in the DC Universe. Making her debut in Runaways #1. Karolina Dean can absorb and manipulate solar energy which she can then use in many ways, including flight, creating force fields, and producing laser blasts. Robert “Bobby” Drake, aka, iceman has superhuman ability to lower his external and internal body temperature, projecting intense coldness from his body. In All-New X-Men #40, when his psychic teammate Jean Grey revealed Iceman to be gay after she read his mind. Although Harley Quinn has been shown to be lovesick for the Joker, her longtime suspected relationship with Poison Ivy proves that The clown princess of crime is a salacious flirt with both boys and girls of the DC Universe. Poison Ivy has god-like control over plants and plant growth. It is known that Poison Ivy and Harley Quinn have had a thing for each other ever since the pair first appeared together in Batman: The Animated Series, and finally, they’re together in canon now. Angela is an Angel who has fought alongside the Guardians of the Galaxy and Thor. She can fly, has super strength and speed, and is immortal. She’s married to fellow angel Sera. William “Billy” Kaplan, aka, Wiccan is the son of the Scarlet Witch and a key member of the Young Avengers, his relationship with Hulkling is one of the few ongoing gay teen relationships in mainstream comics Roxy Washington aka is the daughter of hip-hop artists Roy “Daddy Libido” Washington and Angel “Sexy Mutha” Depres. But instead of following music, she joined the X-Men and train her mutant abilities to have superhuman durability and produce diamond shards that can be fired as projectiles Former British Overwatch agent Lena Oxton blinks through space and jumps through time as a carefree adventurer. in the comics, we get to know more about her relationship with her girlfriend, Emily. Jackson Hyde, aka, Aqualad is the bisexual protege of Aquaman. Not only can he breathe underwater and has enhanced strength, but he has hydrokinesis, which allows him to use water to create solid objects like swords. Teddy Altman, aka, Hulkling possesses shape-shifting abilities and super-strength, Hulkling along with his boyfriend/teammate – Wiccan are the biggest LGBT icons in the Marvel Universe Making his first appearance in The Saga of the Swamp Thing #37, John Constantine is a working-class magician and occult detective who has had relationships with both men and women. The shape-shifting assassin Mystique is a character who defies categorization when it comes to her sexuality due to the nature of her power. Nia Nal, aka, Dreamer, is a trans woman with the power of Oneiromancy, or using dreams to tell the future. Dez Trevius is a yellow ring-slinging member of the Sinestro Corps, Dez Trevius is one of Sinestro’s inner council whose sexuality was recently revealed in Sinestro Annual #1.

Can You Interpret All These Illustrations?

If Ecological Disasters Of Human’s Life Happened In The Fictional World, How Would They Affect Characters?

10+ Pete Joison’s Comics Made From ‘Simple Lines Full Of Whimsy’, But They Are So Funny!

30 Brutally Honest Illustrations That Point Out Issues In Modern Society